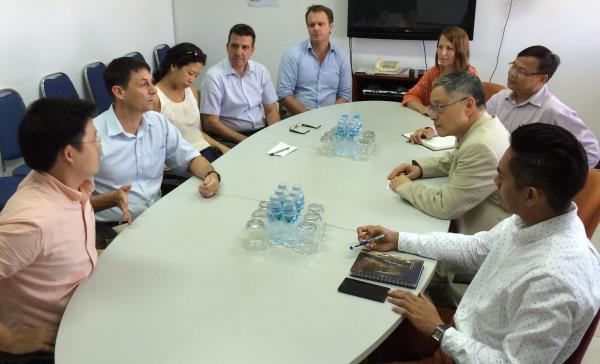 Following a mid-term review, the key donor World Bank has rated the Mekong River Commission’s project to promote bilateral cooperation on water resources management in the Mekong’s main and sub-basins as “moderately satisfactory” despite a slow start and slow spending of the funds.

The MRC entered a financial agreement with the World Bank over the Mekong Integrated Water Resources Management Project (M-IWRMP) in mid-2012, and has technically supported the four member countries of Cambodia, Lao PDR, Thailand and Viet Nam to promote transboundary dialogue and cooperative management of common water resources in the region through five bilateral pilot projects.

As the project came halfway through the term, the bank conducted a thorough review of the progress from late 2015 to early 2016, and reported the MRC in April that the status of the project objective and implementation is upgraded to “moderately satisfactory”.

“The [project] has gotten off to a slow start, with only 23 % of the [bank’s] grant disbursed as of February 2016,” notes Sally Burningham, the bank’s country manager to Laos, in her letter dated 30 March. “Nevertheless, over the last year with a renewed focus…, the [project] activities have become better organised and implementation efficiency has clearly increased.”

The five bilateral projects under the M-IWRMP include the fisheries project along the Mekong and Sekong rivers, the Sesan-Srepok river basins project, the Mekong Delta project, the Lao-Thai wetlands project, and the Cambodia-Thai sister lakes project. Three of them focus on identifying common issues and develop a joint management action plan to address those issues, and the two others focus on mutual learning through exchange and communication.

In addition, at the regional level, the MRC also works on the development of environmental assessment guidelines, the preparation of national work plans on basin development, and communication work to promote regional dialogue for collaboration in water resources management.

According to the review report, both the bilateral projects and the regional work are rated as moderately satisfactory, with the financial disbursement rates at 16 % and 21 %, respectively. The bank also notes some difficulties to move forward with the projects, such as organising cross-border meetings or making field visits against the on-going border demarcation disputes. Also, unclear work plans are cited as a challenge to achieve the original goals of building national capacity for the MRC member countries to better engage in transboundary water resources management.

The bank has been one of the key donors to the MRC, providing U$11 million to the water utilisation project from 2002 to 2008 and contributing another US$8 million to the IWRMP. 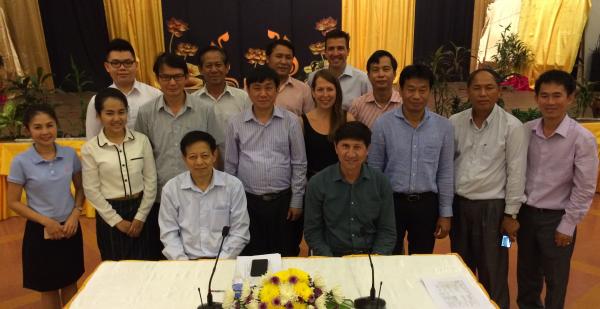 Fisheries specialists from Cambodia and Lao PDR made progress in their joint management of fisheries in the border provinces of Stung Treng, Kratie, Champasack and Attapeu, as they agreed to jointly monitor vulnerable migratory whitefish with MRC’s standard sampling procedures.

The Mekong – Sekong Transboundary Fisheries Management Project is one of the five bilateral transboundary projects funded by the World Bank and technically supported by the MRC Secretariat.

In early May, the two sides met in Pakse for two days to discuss significant transboundary fisheries issues in the two river basins. Through the discussions facilitated by an international expert, they identified unsustainable fishing practices, lack of enforcement of fisheries regulations, and habitat degradation due to excessive land use are some of the key issues for their basins. They also found limited fisheries data and lack of information sharing mechanism as main constraints, and recommended they strengthen the monitoring of fish and fisheries products, set up a transboundary fisheries management body, and develop a joint management plan.
As a start, the two teams identified eight whitefish species such as Probarbus jullenii as monitoring targets, all of which are vulnerable to extinction, migrate to both the rivers and remain commercially important to the four provinces.

Based on the results of discussion, the teams are currently drafting a comprehensive report on joint transboundary issues as a basis of a further joint management plan.

Meanwhile, the teams met again in late May in Phnom Penh to identify a right method for fish monitoring.

Facilitated by the MRC’s fisheries specialist, the two countries discussed and agreed to use standard panel gillnets to monitor the fisheries for calibration and validation purposes, and adopted the commission’s fish abundance and diversity monitoring programme (FADM) to monitor fisher’s catch of selected whitefish species in the Mekong and Sekong rivers.

The two teams will shortly commence the monitoring activities in their respective countries, selecting and training fishermen on the documentation of their fishing practices, fishing gear profiles, mapping monitoring habitats, and preparing standard panel gillnets.

Aiming to publish lessons learnt from a comparison of wetland management practice between the two countries, Lao-Thai wetlands project teams held a joint meeting on 26 May to consolidate their analysis on their own and counterpart’s strength and weakness in management.

The Xe Bang Hieng Basin and the Nam Kam Basin near the Lao-Thai border are the targets of a joint project to learn from each other on wetland management, in particular about water resources management, natural resources utilisation and climate change adaptation, among other issues.

The two sides selected Xe Champhone in southern Laos and Nong Han in eastern Thailand as pilot wetland sites, both of which are recognised as internationally important wetlands that provide rich ecosystems in aquatic flora and fauna and support local livelihoods.

The teams from these wetlands visited each other late last year where they observed water treatment plants, forest conservation areas and reservoirs for irrigation and water supply, and discussed issues, problem-solving methods and management practice. Upon returning, they reviewed literature, conducted further field research, analysed data and information, and identified a number of priority issues within their own countries with recommendation for risk management actions.

For example, the Lao team identified the conversion of wetland for irrigation and other purposes in Mark Mee sub-wetland would pose a high risk to the local livelihoods, and proposed a number of recommendations including zoning, developing a wetland management plan and raising awareness of local populations, after taking lessons from its counterparts.

During the meeting, the both sides discussed in detail on how to improve the joint report and the way to link the joint project to Lao’s national projects, which are also funded by the World Bank. They further discussed on next joint activities for community water management, including wetland clean-up initiatives and GIS mapping.

The joint report is expected to be published in later this year. 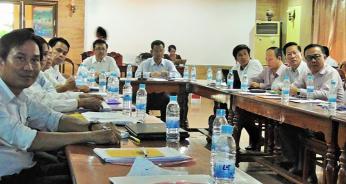 In April, the Cambodia National Mekong Committee held a team meeting with its four bilateral projects under the Mekong IWRM Project to review the CNMC strategic plan for 2016-2020 in order to align their activities with the country’s strategy.

Also in April, the Mekong Delta and the Sesan-Srepok teams of Cambodia organised a national stakeholder consultation workshop on significant joint issues of resources management identified during a Cambodia-Viet Nam joint workshop held in March in Hanoi.

More than 50 participants attended the consultation workshop and commented that those identified issues are not comprehensive and proposed a number of additional issues to be added for the joint issues, including problems with water quality assurance and lack of legal documents. The workshop recommend that the two countries set up the protocol to harmonise data formats and processing and establish a cross-border legal framework and mechanism for benefit sharing. The inputs have been incorporated into a draft joint issues paper.

Meanwhile, Cambodia’s fisheries team over the Mekong and Sekong river basins held a series of technical working group meetings in June to discuss the planning of a joint field visit to both Stung Treng and Champasack provinces and the organisation of a joint Fish Day event in the Dolphin pool at the Cambodia-Lao border. The working group also met to discuss the agreed fish monitoring methods and tasks.

A working group for the Tonle Sap Lake project began developing a training session and tasks for the pilot community, after selecting “Sdei Krom-Rohasourng Community Fisheries” in Battambang as a pilot site for better lake governance. The community is expected to work on forest and fishery conservation through fish patrolling, raising awareness of fisheries laws, and planting forests in the flooded community, among others.

Prior to the Lao-Thai joint meeting in Champhone for the Xe Bang Hieng and Nam Kam wetlands management project, the Lao National Mekong Committee organised on 25 May a preparatory meeting with the line agencies and the working group to discuss a draft joint report on wetland management and future activities.

About 20 people attended the meeting to exchange their views, and proposed a number of activities for knowledge exchange on community water management. Among others were to build a wetland committee in Mark Mee sub-basin with local staffs, to develop a community-based management strategy and work plan to guide the local population, and to collect data of forests for protection, conservation and production to make a GIS mapping.

Meanwhile, the Mekong-Sekong fisheries team continued the preparation for a joint field visit and Fish Day event in Stung Treng, in addition to preparing and attending the joint workshops in Pakse and Phnom Penh. 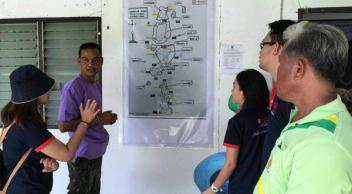 Prior to the Lao-Thai joint meeting in May for the wetlands management project, the Nam Kam wetlands working group continued to organise a workshop on project introduction, data collection and risk analysis in Sakon Nakhon.

On 8 April, 75 villagers participated in a workshop in Chiang Khruea sub-district to better understand the project and prepare data collection for a risk analysis of wetland management. Another 80 villagers attended a similar workshop in Muang district on 3 May. The team further conducted a number of training in several villages to ensure the quality of data collection. The data will be compiled and analysed in a report later this year.

The Songkhla Lake Basin working group for the sister lake communication project, meanwhile, kicked off an eco-tourism initiative on 8 June, launching a public survey on a new eco-tourism route in the lake around Ko Mak, Phattalung Province. This initiative aims to increase the community’s income sources as well as to raise awareness of the lake’s natural resources and livelihoods. In this new initiative, eco-friendly “nature lover” tourists would have plenty of opportunities to enjoy the lake’s natural beauty and to appreciate fishers’ livelihoods through homestay. The initiative is co-financed by the Siam Cement Group Foundation.

The Mekong Delta project team of Viet Nam began the preparation for a field exchange visit with relevant agencies to accept their Cambodian counterparts.

In June, the team met with the Southern Institute of Water Resources Research and the Southern Institute of Water Resource Planning to discuss their specialized research areas and implementation plans, and identified a number of interesting places for the field visit, including Tha La and Tra Su rubber dams, and Cai Co and Long Khot boundary canals. It is expected to take place in August.

The team also drafted a national report and a joint report on transboundary water management issues and submitted them to the MRC Secretariat for review and comments.

Meanwhile, the Sesan-Srepok project team developed a concept note on a planned joint field visit between Cambodia and Viet Nam on the border provinces. The team discussed with various departments under the Ministry of Agricultural and Rural Development and the Ministry of Natural Resources and Environment as well as the Electricity of Viet Nam to host their Cambodian counterparts.

The team also made field trips to Viet Nam’s Central Highland to visit hydro-met stations in Pleiku, Sesan 4 and Srepok 4 hydropower reservoirs and irrigation schemes in Ea Soup areas, after holding meetings with representatives from the relevant offices. The meetings and visits focused on the rule of conjunctive operation of the reservoirs and land use.

The team also completed its national and joint papers on transboundary water management issues and submitted them to the MRCS.