For the Distressed Mekong, a Splash of Good News

According to MRC’s observed water level at Jinghong showed decreasing about 0.10 m from 536.63 m to 536.53 m during the weekly monitoring period from 17 to 23 May 2022 (recorded on 7:00 am), and staying about 1.39 m lower than its two-year average (2020-2021) value. The Eyes on Earth (Mekong Dam Monitor) mentioned that during the dry season, river flow contributions from China account for the largest portion of sub-basins. In April, 36% of flow came from snowmelt and dam releases in China.

Last week, from 17 to 23 May 2022, water level (WL) along the lower Mekong River in Thailand’s Chiang Saen was increasing about 0.35 m and stay about 1.54 m higher than its Long Term Average (LTA) level, which is considered normal. WL at Lao PDR’s Luang Prabang rapidly decreased 0.09 m compared with last week and stay 0.22 m higher than its historical maximum value. WLs at the monitoring stations at Chiang Khan in Thailand increased by about 0.05 m, while at Vientiane in Lao PDR decreased about and 0.18 m. The current WLs at these stations are about 2.72 and 2.28 m respectively higher than their LTA values, which considered abnormal. WLs at Nong Khai and Paksane increased 0.06 m and 1.05 m, respectively, and staying about 1.31 m higher at Nong Khai while at Paksane is about 0.53 m lower than its Maximum value.

From Nakhon Phanom in Thailand to Pakse in Lao PDR, WLs increased in between 0.65 m and 1.15 m during the monitoring report. The current WLs at Nakhon Phanom to Pakse were staying close to their maximum levels, considering abnormal. WLs in Cambodia’s Stung Treng to Kompong Cham increased between 0.65 m and 0.97 m, staying slightly lower than their maximum levels. From Chaktomuk, Koh Khel on the Bassac River and Prek Kdam on the Tonle Sap River increased about 0.50 m, staying higher their LTA values. For the tidal stations at Viet Nam’s Tan Chau and Chau Doc, WLs fluctuated between their minimum and LTA levels, due to daily tidal effects from the sea and considered as critical. The current WLs higher than their maximum values are at Luang Prabang, Chiang Khan, Vientiane and Pakse while the rest of the key stations are higher than their LTA values.

Through the MRC home page summary graphic and dedicated Flood Forecasting Webpage, the Regional Flood and Drought Management Centre (RFDMC) communicates these daily bulletins to National Mekong Committees, non-governmental organizations, the media, and, most important, the public. The home page graphic provides an easy-to-read summary of the 5-day forecast along the Mekong River system.

How to read the flood situation summary:

Definitions:
Stable water level is a daily change of less than a 10 cm from Chiang Saen to Savannakhet; less than 5 cm at Pakse and Stung Treng; and no more than 3 cm from Kratie downstream.
Flood stage is when the flood level is exceeded; the flood level is determined by the member countries.
Alarm situation is when flood level is forecast within the next 3 days

This information is supplied as a service to the governments of the MRC Member Countries so that it may be used as a tool within existing national disaster forecast and warning systems.

This information is supplied as a service to the governments of the MRC Member Countries so that it may be used as a tool within existing national disaster forecast and warning systems.

Promote and coordinate sustainable management and development of water and related resources for the mutual benefits of the lower Mekong countries and the people's well-being.

The MRC supports a basin-wide planning process based on principles of Integrated Water Resources Management (IWRM). We provide a wide array of advisory and technical assistance to help the lower Mekong countries promote sustainability in major areas of development.

The MRC Functions are designed to help the lower Mekong countries build consensus around solutions that ensure a sustainable future for the Mekong and its people through basin monitoring, assessment, data and information sharing, and dialogue and cooperation.

Data and Information Systems and Services

The MRC provides scientific analysis and advice for the lower Mekong countries and various stakeholders and interested parties to sustainably manage and develop the Lower Mekong River Basin. 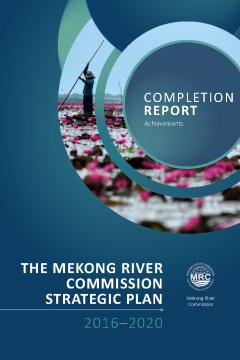 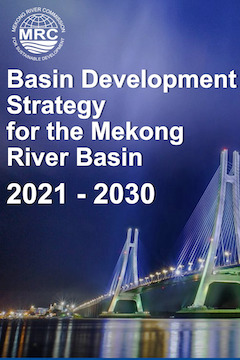 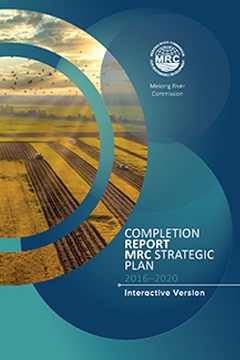 Data and information are key to sustainable water resources management. The MRC has a long history of data collection and analysis about the heath and conditions of the Mekong River, with some data over 100 years. The interactive dashboards assemble and visualise more than 10,000 datasets covering historic and current assessment covering hydrology, sediment, water quality, fisheries, ecological health, climate change, and flood and drought. 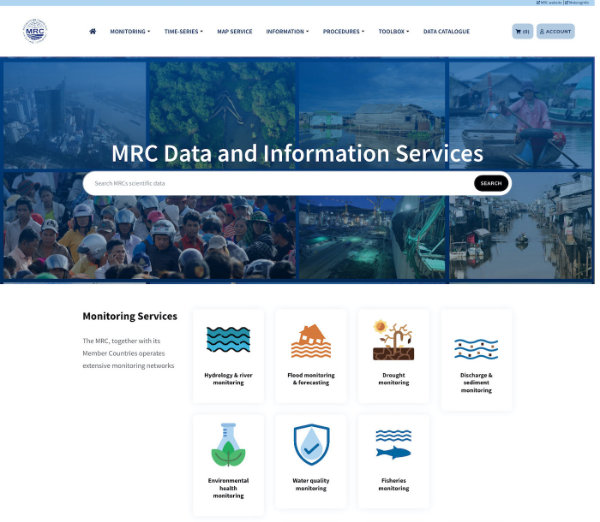 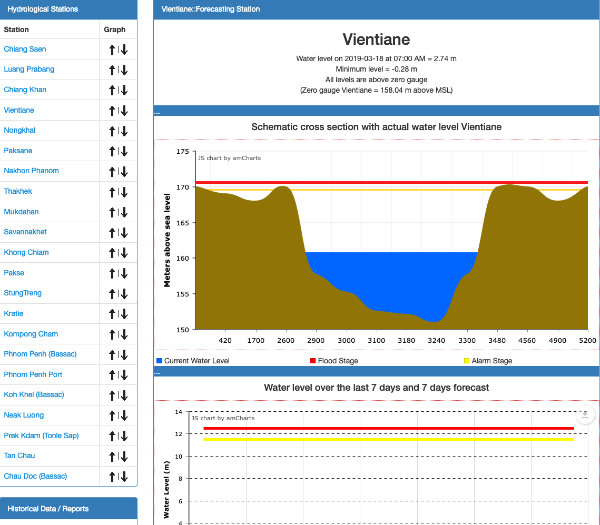 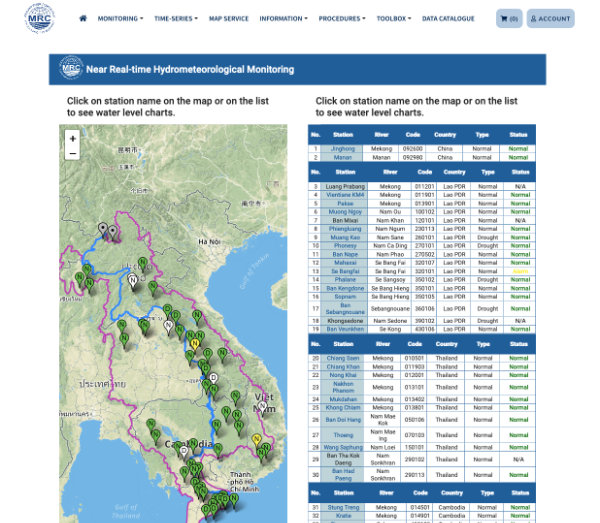 Procedures for the Maintenance of Flow on the Mainstream (PMFM) Website

Cooperation on the maintenance of an acceptable flow regime on the Mekong mainstream.

Stay updated with the MRC news, data, publications, events and opportunities, and get involved in our consultations. We’d love to hear from you. 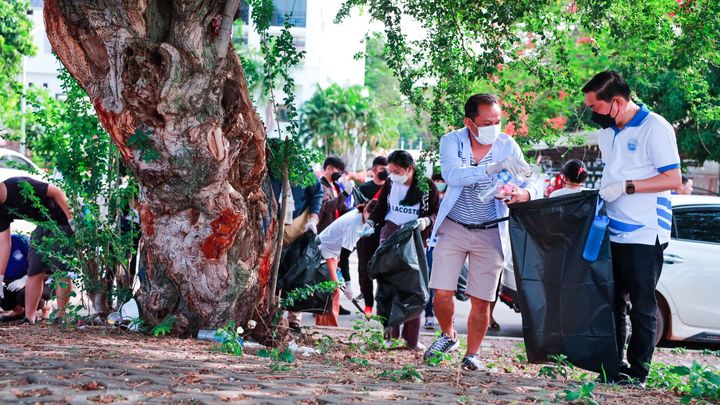 The amount of plastic waste produced by Thailand is approximately 3.5 million tonnes per year while it is 3.3 and 0.3 million tonnes…

Read all our Did You Know? 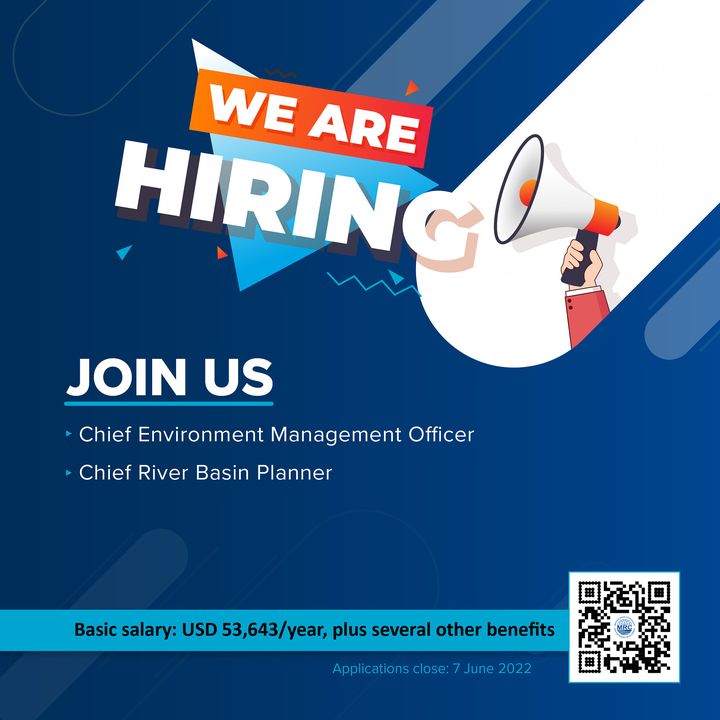 Are you a passionate person with demonstrated experience, at a leadership level, in environmental management or water…

Meeting the needs, keeping the balance

Our VISION for the Mekong River Basin

The MRC envisions a prosperous Mekong River Basin while sustaining efforts to ensure sustainable development and management of the Mekong’s water resources.

Our VISION for the Mekong River Commission

Our MISSION for the Mekong River Commission

Promote and coordinate sustainable management and development of water and related resources for the mutual benefits of the lower Mekong countries and the people's well-being.

TOP
This website uses cookies to analyse how our site is used and optimise functionality. Navigating this site means you accept our use of cookies. Accept