Between 2010 and 2017, water quality for the protection of human health was almost good or very good along the mainstream, with only a few stations during 2010-2014 occasionally having a lower but still acceptable rating.

Over recent decades, the quality of water bodies worldwide has been negatively impacted by human activities. In the Lower Mekong River Basin (LMB), clean water is critical. The health, economic wellbeing, and quality of life for most of its people are inextricably linked to the quantity and quality of the basin’s water resources. Surface waters in the Mekong River are used to meet people’s basic needs and the needs of agriculture, fisheries and manufacturing.

However, as the region develops and human populations grow, pressures on water quality have increased. Economic development has resulted in elevated levels of pollution. Water quality in parts of the basin has degraded gradually over time. The levels of pollution are now apparent and measurable. Various infrastructure developments including hydropower projects proposed and under construction in the Mekong mainstream and tributaries are also a potential risk, particularly for downstream water quality. While dams are under construction, sedimentation from site disturbance, waste generated by the workforce, and spillages from fuels and lubricants are all potential risks to water quality.

Data collected by the MRC’s Water Quality Monitoring Network (WQMN) demonstrates that water quality – mainly as a result of increasing nitrogen and phosphorus levels – has deteriorated in a number of river reaches, typically those in areas where population density is highest.

The foundation of effective water quality management is reliable data and analysis. Water quality monitoring is crucial in determining how water bodies have been impacted and can lead to the development of effective pollution prevention measures and control systems.

To ensure water quality throughout the Mekong Basin is maintained at appropriate levels, in 1985 the MRC established a Water Quality Monitoring Network (WQMN) in Lao PDR, Thailand, and Viet Nam (Cambodia joined in 1993) to detect changes in water quality and take action as necessary. Since its launch, the network has provided a continuous record of water quality in the Mekong River and its major tributaries.

Under the MRC’s Joint Environment Monitoring (JEM) Programme, which is being implemented with financial support from GIZ to monitor the impacts of Xayaburi and Don Sahong Hydropower Projects, additional sampling locations will be added to assess particular changes that may be a result of the construction and operations of hydropower projects. Two new water quality parameters –chlorophyll-a and turbidity – have been tested in these two pilot sites. 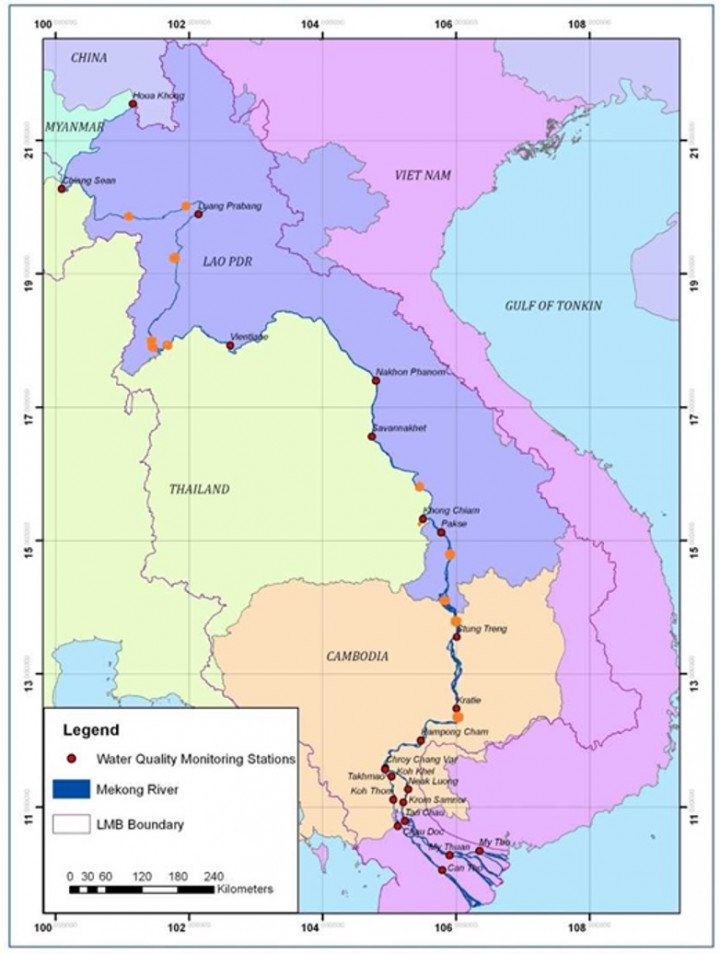 Water quality monitoring supports the implementation of the MRC’s Procedures for Water Quality (PWQ), which were adopted by the Member Countries in 2011. The PWQ aims at ensuring water quality remains safe for future generations, and that in the event of an environmental emergency, countries are prepared to assist one another to protect riverine communities and the environment.

At national level, each Member Country has a designated water quality laboratory to undertake monitoring, sampling and analysis. The designated laboratories are responsible for undertaking routine monitoring and for analysing, assessing and reporting water quality data on an annual basis. The water sampling, sample preservation, sample transportation and storage have been carried out in accordance with international standards such as the 20th edition of the Standard Methods for the Examination of Water and Wastewater and method validation of ISO/IEC 17025-2005.

At regional level, the MRC Secretariat provides technical support for the monitoring of water quality and to ensure the integrity of data recorded at national level. The MRC Secretariat also acts as a central hub for regional water quality data and provides a platform for data exchange in accordance with the Procedures for Data and Information Exchange and Sharing (PDIES).