The governments of the lower Mekong countries recognise the economic potential of the Mekong River’s water resources to contribute to growth, poverty reduction and livelihoods. The countries have developed poverty reduction strategies that include water supply for people’s daily use as well as irrigation, flood attenuation, energy production and fisheries. Plans for future development initiatives, which include expanding hydropower and irrigation production and increasing tourism, are ambitious and will increase demands on the river’s resources.

Without appropriate planning and management, development can have negative impacts on the health of the river, including increased pollution, floodplain alteration and habitat destruction. Basin plans set objectives and measures for optimal and sustainable development of the basin’s resources, while proposing mechanisms to offset the adverse impacts.

The practice of basin planning in the Lower Mekong River Basin (LMB) has a long history dating back to 1957, when the Mekong River Commission (MRC) began life as the Mekong Committee, under the broader framework of the UN. Initial cooperation focused extensively on data collection and on studies on agriculture, fisheries, navigation and education. In 1970, the Indicative Basin Plan (IBP) was prepared by the Mekong Committee, proposing a 30-year development programme to expand irrigation, navigation, hydropower and flood control infrastructure. The IBP included some 180 projects, including a US$2 billion short-term programme for 700,000 ha of irrigation expansion and tributary hydropower development as well as a US$10 billion long-term programme comprising a cascade of mainstream dams. In 1987, this plan was downscaled to 29 projects by the Interim Mekong Committee. Due to regional military conflicts, much of the Indicative Basin Plan was not implemented.

In 1994, France’s Compagnie Nationale du Rhône (CNR) led a study for the Interim Mekong Committee called the 1994 Mekong Mainstream Run of River Hydropower. This study introduced a major shift away from storage to run of river dams on the mainstream and was influential for development planning in the countries.

Growing investments in water infrastructure projects in the 1990s brought about recognition of the likely social and environmental impacts of development. In response to the concern and after Cambodia emerged from internal conflicts, the four lower Mekong countries – Cambodia, Lao PDR, Thailand, and Viet Nam – reached an agreement to cooperate for the sustainable development of the Mekong River Basin (the 1995 Mekong Agreement), leading to the establishment of the MRC, which opened a new era for planning in the LMB using a coordinated approach.

The approach is commonly referred to as integrated water resources management (IWRM), which focuses on water management in the basin and at transboundary and cross-sector levels. The approach takes into account the economic significance of water resources, and the environmental and social importance of water. The approach also acknowledges the participation of a wide range of groups in contributing to decision-making and attempts to manage trade-offs between competing interests and values.

The MRC’s Approach to Basin Planning

Water resource management in the LMB is a mix of a ‘cooperative and coordinating model’ at the basin scale, facilitated through the MRC Secretariat, and four national models, where individual sovereignty, customs and administrative systems dominate.

The MRC acts as an “honest broker” and regional platform for cooperation to assist the Member Countries in achieving their basin-scale and national aims through the provision of shared information, technical guidance and facilitation.

The 1995 Mekong Agreement tasked the MRC to form a Basin Development Plan (BDP) to identify, categorise and prioritise projects and programmes at the basin level. The MRC set up a BDP Programme to lay down principles, tools, capacities, studies and strategic direction. The first phase of the BDP Programme (BDP1), from 2001 to 2006, laid the foundations for cooperative planning, bringing the four Member Countries together to build relationships and develop planning processes, assessment tools and a knowledge base.

The BDP Programme 2007-2010 (BDP2) was implemented while the Mekong River Basin was undergoing significant change, driven by global, regional and national developments. Increased pressures from water resources developments in the basin demanded a basin perspective of national water resources development plans and their cumulative impacts. Therefore, the BDP2 focused on transboundary water opportunities and issues to remove longstanding barriers to realising opportunities for sustainable development of the Mekong River Basin, while recognising data and knowledge limitations.

The first BDS 2011-2015 represented an important milestone in the history of Mekong cooperation. It represented a revised role and focus for the MRC Secretariat, moving it from a focus on acquisition of knowledge and best practice in water management to include a sharp focus on how the Mekong Countries share, utilise, manage and conserve the Mekong’s resources for economic growth and poverty reduction. From 2011-2015, the BDP Programme (BDP3) coordinated the implementation of the first BDS, and the preparation of the second BDS 2016-2020, the National Indicative Plans of the Member Countries for 2011-2015 and for 2016-2020, and the MRC Indicator Framework for planning, assessing and reporting. It also initiated the preparation of the State of Basin Report and supported the implementation of the MRC Procedures especially PMFM and PNPCA.

The Basin Development Strategy 2016-2020 continued relevant priorities of the first BDS, focusing on sustainable development in the LMB and managing risks of adverse impacts of national plans and projects.

Unlike the previous editions with a timeframe of five years, the BDS 2021-2030 is prepared for a ten-year period and gives greater emphasis on actions needed for the entire Mekong River Basin, as the current water security issues can be addressed effectively only at the basin scale through cooperation between all six basin countries and their cooperative bodies.

The Strategy moves beyond water resources planning to encompass operational management, including the transboundary coordination of operations of dams and other water infrastructure. Additionally, it integrates the Sustainable Development Goals (SDGs) relevant to water resources management and internalises a ‘gender and vulnerability’ approach to account for intersectional inequity and the different dimensions of vulnerability. 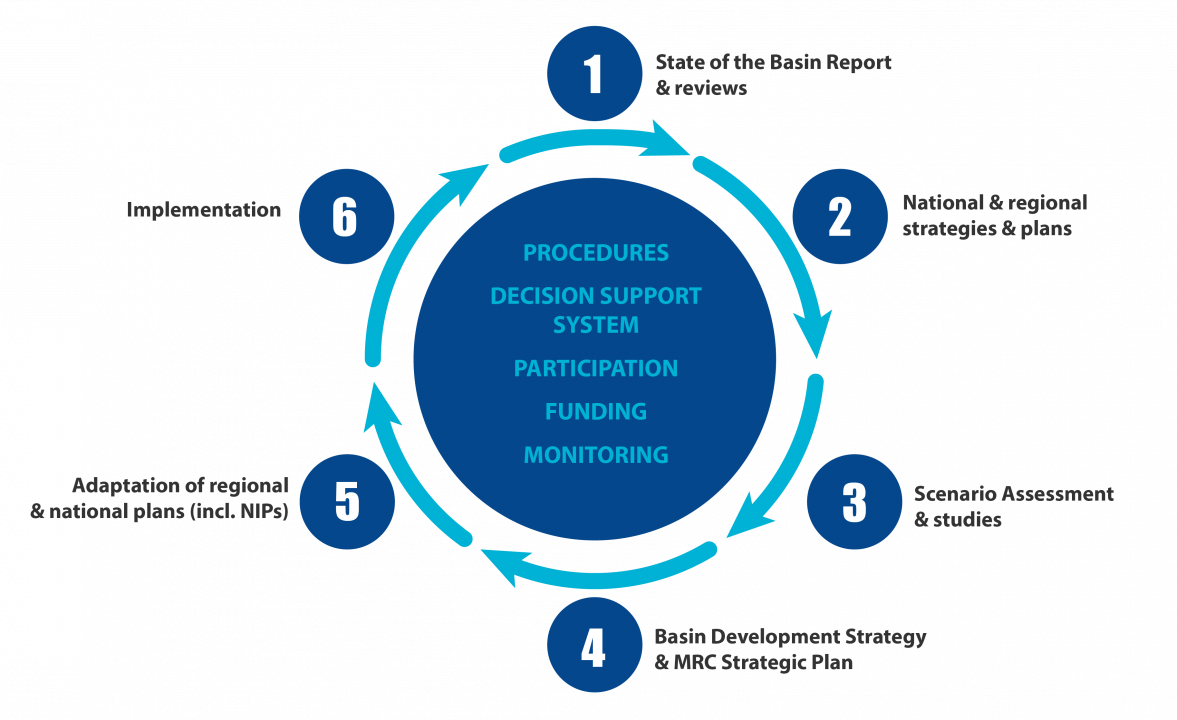 Basin Monitoring Data and Information Systems and Services Modelling and Assessments Basin Planning Flood and Drought Forecasting MRC Procedures Dialogue and Partnership Stakeholder Engagement and Communication
Back
TOP
This website uses cookies to analyse how our site is used and optimise functionality. Navigating this site means you accept our use of cookies. Accept