Vientiane, Lao PDR, 20 February 2020 – Government officials and stakeholders suggested that the Xayaburi hydropower developer share information on the dam operation with the lower Mekong countries for better planning and management.

They made the comments while visiting the Xayaburi hydropower plant on 7 February 2020 which was facilitated by the Mekong River Commission and Lao government and hosted by the Xayaburi power company. The visitors were made up of 50 government and non-governmental organization representatives, researchers, journalists and specialists from the MRC Secretariat. 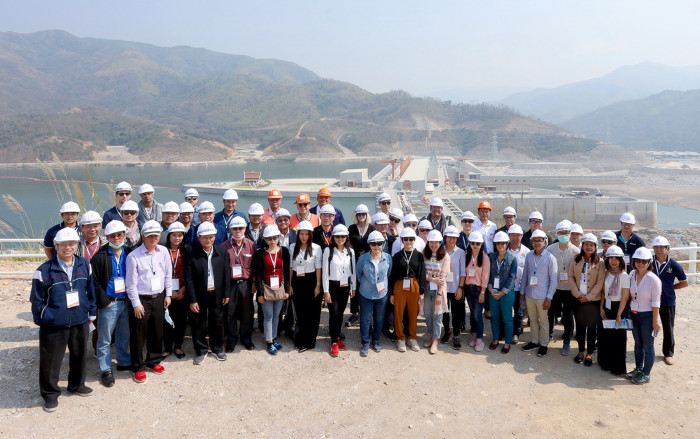 The visitors pose for photo above the Xayaburi power plant where they are taken to see the upper-lower water levels between the dam. Photo by Xayaburi power company.

“We want the site visit to speak for itself regarding the situation of low flows and drought in the Mekong,” said Dr. Anoulak Kittikhoun, Chief Strategy and Partnership Officer at the MRC Secretariat who led the group to the site. “We’d like our stakeholders to see the dam and its operation with their own eyes and pose questions to the developer so that they can form their own assessment.”

The tour to the site of the 1,260 MW Xayaburi dam included a presentation on the power plant general design by company representatives, and visits to fish passes, sediment flushing gates and the viewpoint atop the power plant where the participants could see upstream-downstream water levels. The fish pass and sediment transport related mitigation measures were the result of significant investments by the Lao government and developer to address the recommendations provided in an MRC’s Technical Review Report, following the six-month long Prior Consultation process.

While the visitors appreciated the level of openness of the Xayaburi developer, they said the company should continue to work with the MRC Secretariat to regularly share data on dam operation, water flow, sediment transport and fish migration when are available.

“Observed data and information on sediment and fish migration above and below the dam as well as on energy generation should be shared,” said Mr. Nhan Quang Nguyen, the representative from a Vietnamese NGO, Centre for Promotion of Integrated Water Resources Management. “Transparent and timely sharing of this information could help the people and relevant authorities make better planning.”

Mr. Chea Narin from the Cambodia’s Ministry of Mines and Energy echoed the suggestion.

“Cambodia would like to see the Xayaburi dam developer and owner continue addressing our past concerns and sharing more information with the MRC Secretariat,” Mr. Narin said, referring to data sharing from the dam that helps to address changes in water flow, eco-system, sediment transport and livelihood of the lower countries and people.

“The dam operation rules should also be shared with the MRC Secretariat and the other MRC member countries so that coordinated operations of the dams on the mainstream of the Mekong could be established.”

A researcher from Thailand’s Kasetsart University Ms. Patchara Jaturakomol said that the absence of water flow data sharing from the Xayaburi dam with the public and lower countries made her think that the Xayaburi was storing water.

“It’s hard not to think that the dam isn’t storing the water when you saw the water levels on the upstream and downstream of the dams are different.”

Mr. Knut Sierotzki, the engineering lead from Poyry of Finland which assists the Xayaburi power company, said that hydrologically the different water levels observed immediately above and below the dam are for generating energy.

“There is no storing of water – what flows in will eventually flow out,” Mr. Sierotzki said as he explained to participants about the run-of-river plant.

“The flow regime of the river is not changed. The inflow water is constantly released either through the turbines or spillway,” he continued, adding that the discharge during this dry season was about 50% higher than that of the 2003-2004 dry year which saw the water flowing out between 800 – 1000 cubic meters/second. 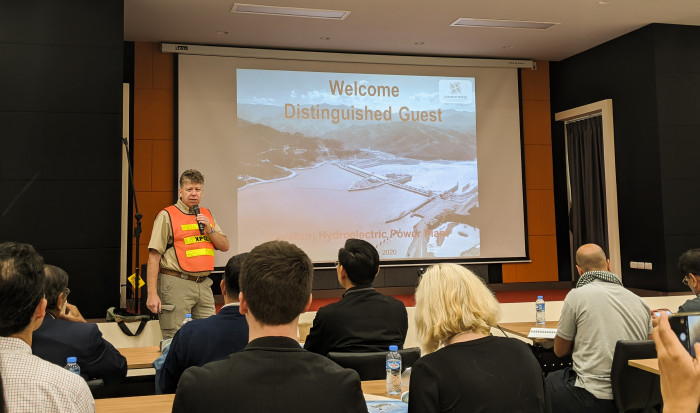 Mr. Knut Sierotzki, the engineering lead from Poyry of Finland that assists the Xayaburi power company, speaks to the group during the site visit.

But Ms. Jaturakomol said she would like the developer to share this data officially with the public to allow the “data speak for itself”.

The Xayaburi dam is the first dam built on the main channel of the lower Mekong River. Located approximately 150 km downstream of Luang Prabang in northern Lao PDR, the plant commercial operations began in late October 2019.

In light of stakeholders’ call and in ensuring that the Mekong mainstream dams such as the Xayaburi and the Don Sahong are monitored and that information from the dams is shared with the public, the MRC is partnering with the Lao government and the developers of the two dams to monitor the dams’ transboundary environmental impacts through an MRC’s Joint Environmental Monitoring Program.

The purpose is to collect, generate and share reliable and scientific data and information through an established basin wide Program on site-specific (trans-boundary) issues regarding hydrology and hydraulics, sediment, water quality, aquatic ecology and fish and fisheries.

Today and tomorrow, representatives from Cambodia, Lao PDR, Thailand and Viet Nam are meeting in Norng Khai of Thailand to discuss approaches and methodologies to implement the JEM program.