Vientiane, Lao PDR, 17 January 2022 — Anoulak Kittikhoun takes office today as the third riparian Chief Executive Officer (CEO) of the Mekong River Commission (MRC) Secretariat and will lead the Vientiane-based international organization and its flood and drought centre in Phnom Penh during his period in office from 2022 to 2024.

Dr Anoulak, a Lao national, is a seasoned international development professional well-versed in Mekong affairs that includes twenty years of experience in previous senior leadership roles at the MRC and at the United Nations and related bodies, latterly serving as Lead Desk Officer of the Asia and Pacific Division. He was the first international member of staff from Lao PDR at UN Headquarters.

His appointment as CEO, the first one from Lao PDR in the MRC’s twenty-five year history, was endorsed by the MRC Ministerial Council last November following a unanimous decision by the MRC Joint Committee. The MRC Council is the highest governing body of the organization with its membership comprising water resources and environment ministers from Cambodia, Lao PDR, Thailand and Viet Nam.

“I’m deeply honoured and humbled for the esteemed position,” Dr Anoulak, who is the youngest CEO ever appointed to the post, said. “My mission for the next three years is to facilitate cooperation among riparian countries on critical Mekong River Basin challenges and opportunities, further uplift the MRC as a world class river basin organization, and maintain and build new partnerships to support the first two endeavors.” 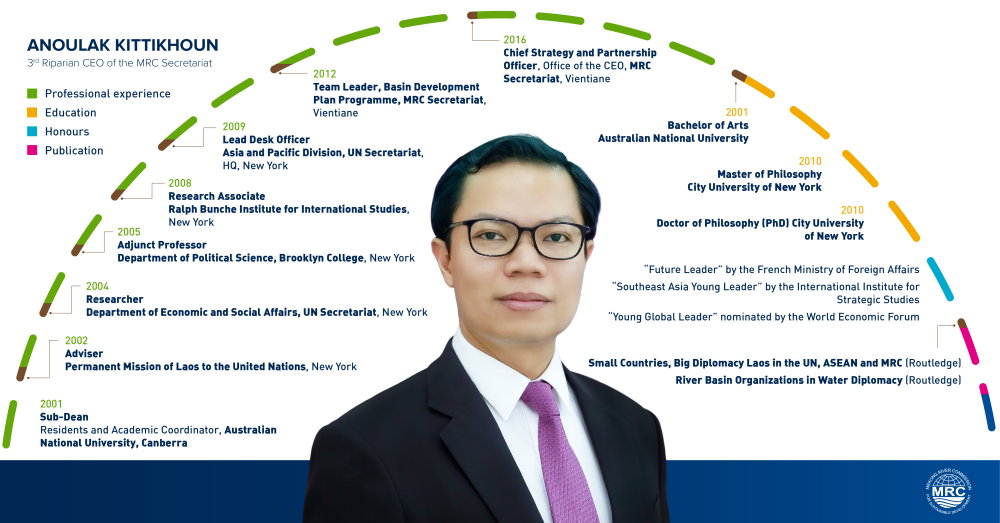 During his term the new CEO will oversee the implementation of the Mekong Basin Development Strategy 2021–2030 and MRC Strategic Plan 2021–2025 as the Basin faces unprecedented challenges from climate change and erratic water flows. Dr Anoulak’s most recent position from 2016 as the MRC’s Chief Strategy and Partnership Officer until his appointment as CEO places him in a strong position to deepen engagement between MRC Member Countries, Dialogue Partners, Development Partners and other stakeholders.

He also served as Team Leader of the former Basin Development Plan Programme at the MRC Secretariat from 2012 to 2016 where he led a team of riparian professional staff, support staff, international advisors and consultants that implemented a USD 14 million programme. His work has been recognized with several global and regional leadership awards or nominations, including the World Economic Forum and French Ministry of Foreign Affairs.

He is a graduate of Australian National University with a Bachelor of International Relations, Commerce and Finance, a Master of Philosophy in Political Science and a Doctorate in Political and Economic Development both obtained from the City University of New York. He is the co-author of two books, River Basin Organizations in Water Diplomacy, and Small Countries, Big Diplomacy, as well as several articles on water diplomacy and international relations, about the Mekong, ASEAN and UN affairs.

Dr Anoulak is married with a daughter and son. He succeeds the second riparian CEO, Dr An Pich Hatda, a Cambodian national, whose term ended last week. 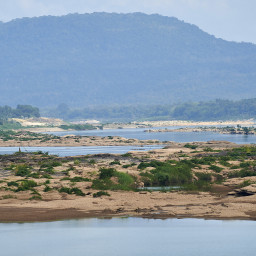 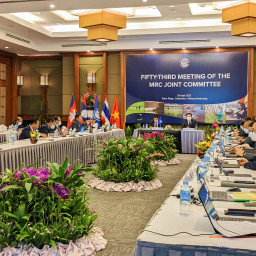 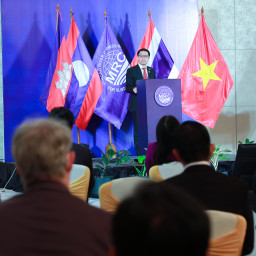