Vientiane, Lao PDR, 25 July 2018 – The Mekong River Commission is monitoring closely the situation unfolding since 24 July on the flooding in Attapeu Province in southern Lao PDR due to the incident with the Xe-Pian Xe-Namnoy Hydropower Project.

According to notification document by the Lao government to the MRC, the Xe-Pian Xe-Namnoy project is located on Xe-Pian and Xe-Namnoy rivers in Champasak Province (Paksong, Pathoumphone and Champsack Districts) and Attapeu Province (Samakhixay and Sanamxay Districts). The project consists of two major dams – Xe-Pian and Xe-Namnoy - and five saddle dams (smaller auxiliary dams). The Xe-Pian Dam (48 meter high) is a concrete-gravity and earth fill dam, while the Xe-Namnoy (77 meter high) is clay-core and rock-fill dam.

It was reported by Lao state media that, on 23 July, one of the saddle dams failed and unleashed flash flooding into the Xe-Pian river affecting the six villages of Sanamxay district including Yai Thae, Hinlad, Mai, Thasengchan, Tha Hin, and Samong. Hinlad and Mai villages were hard-hit.

“We express condolences for this national tragedy in Lao PDR. We stand ready to visit the site as well as to provide appropriate support in this time of need,” MRC Chief Executive Officer Pham Tuan Phan said.

The Xe-Pian river (and Xe-Namnoy river) flow into the Xekong River, a major tributary of the Mekong. The distance from the dam to the confluence of the Xekong and Mekong is about 283 km. Located right below the confluence is Stung Treng in Cambodia with Kratie about 124 km further down. 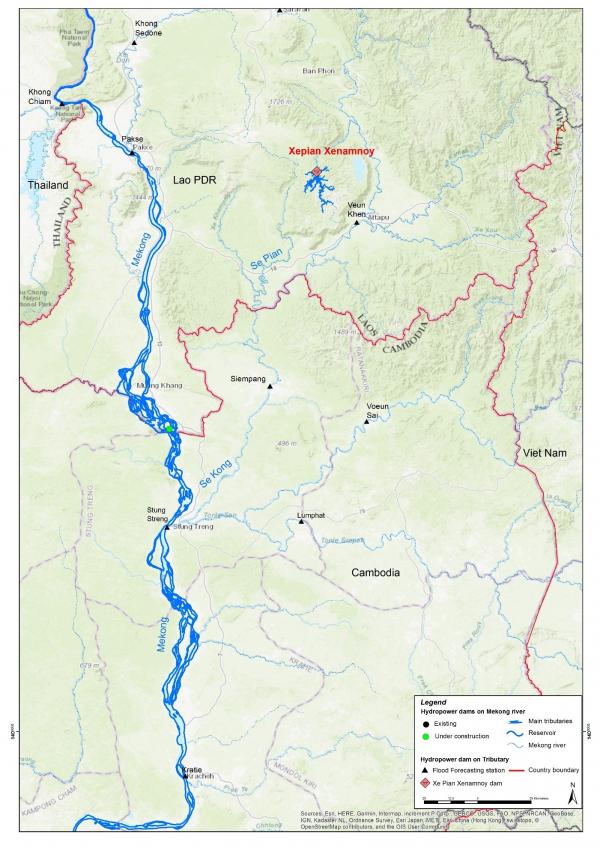 According to MRC monitoring station in Siem Pang district (Stung Treng province in Cambodia) on the Xe Kong River, the observed water level recorded automatically in 15-min interval, water level increased approximately by 3 meters from 4 PM of 23 July 2018 till 2 PM today. At 4 PM on 23 July, the water level at Siempang was observed at 8.40 m and today, it was observed at 11.4 m (at 2:30 PM). Siempang is about 187 km downstream of the dam and 96 km upstream of the Xe Kong – Mekong confluence. This is close to the alarm level of 11.5 m. 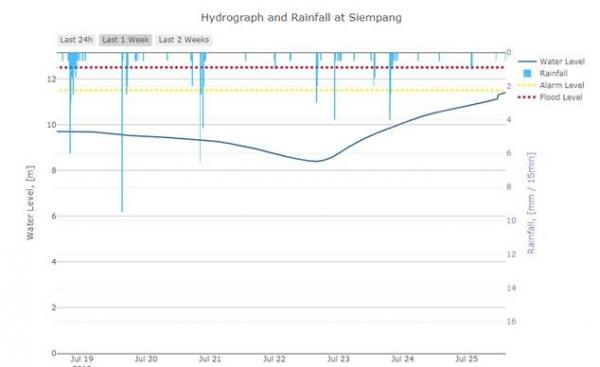 The project, which is estimated to cost US$1.02 billion, is the first build-operate-transfer (BOT) project to be undertaken by South Korean companies in Laos. In addition to electricity generation, the project will also provide irrigation, with 6-km channels connected to the powerhouse.

The Lao government notified MRC in September 2013 in accordance with the notification mechanism under the Procedures for Notification, Prior Consultation and Agreement (PNPCA). Notified projects on Mekong tributaries are not required to undergo MRC’s prior consultation process, including assessments. Projects on tributaries follow national laws and regulations.