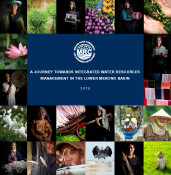 19 March 2019 , Office of the Secretariat in Vientiane

26 December 2017 , Office of the Secretariat in Vientiane

When night falls, electric power lights up a renowned fish farm village floating on the Viet Nam’s Cuu Long (Mekong) waterways in the dark, with sparkling lights warmly embracing every family who relies on the Mekong to make a living. It conveys a profound meaning of life on water, offering a thought-provoking story of the historical connection between people and the river.

Banking on the seasons

Smallholder farmers in rural Cambodia tread a fine balance between self-sufficiency and mounting debt, a balance that could be tipped by climate change.

Living on the edge of the rising sea

A woman’s long and tough journey

Madame Khempheng Pholsena’s work space, located at the Prime Minister’s Office complex in Vientiane, is hardly reminiscent of her early days, as she recalls her time in a cave in Huaphan Province during the war time for independence.

If he worked in a corporate world, Sai-ngern Inthawong, 63, could have described himself as a ‘self-starter’ for what he has accomplished in a wetland located on the eastern edge of Vientiane Capital.
, Vientiane, Lao PDR