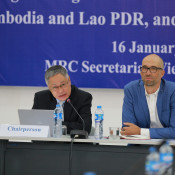 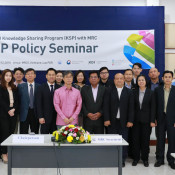 Vientiane, Lao PDR, 15 January 2018 – Water security and integrated river basin management, challenges and opportunities in hydropower development, and future direction of sustainable hydropower development in the Mekong basin are some of the main topics specialists from the Mekong River Commission and Korea Development Institute discussed last Friday at a regional working session held in Vientiane. 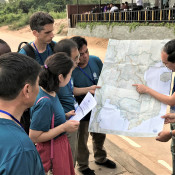 On 13 and 14 December, representatives from the Mekong River Commission (MRC) Member Countries, China, the International Water Management Institute (IWMI), and the MRC Secretariat made a joint visit to the Mekong River. The visit, which focused on a stretch of the river that runs through Nakhon Phanom in Thailand, was organized as part of the Joint Research on Hydrological Impacts of the Lancang Hydropower Cascade on Downstream Extreme Events – a cooperative activity between the MRC and the Lancang-Mekong Cooperation Mechanism. 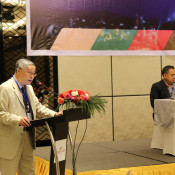 More than 120 representatives from different interest groups gathered at the Mekong River Commission Regional Stakeholder Forum, which was held over two days on 15-16 December. The purpose of the forum was to discuss both the outcomes of the now completed Study on the Sustainable Development and Management of the Mekong River, including impacts by mainstream hydropower projects – known as the ‘Council Study’ – and the update of the commission Preliminary Design Guidance for Mainstream Dams and Sustainable Hydropower Development Strategy in the Lower Mekong Basin. Participants included commission member country governments, development partners, non-governmental organizations, research institutes, the media, and private developers from across the region. 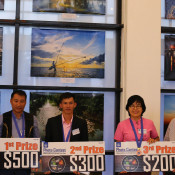 Vientiane, Lao PDR – 7 December 2017 – The Mekong River Commission (MRC) today launched a photo exhibition with the winning photos of its first photo contest at the secretariat in Vientiane, and celebrated the diversity of the Mekong and its water use with the winners and guests. 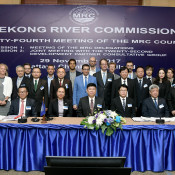 29 November 2017, Pattaya, Thailand – Today, the Mekong River Commission (MRC) Council comprising water and environment ministers of Cambodia, Lao PDR, Thailand and Viet Nam gathered for its Twenty-Fourth Meeting in Pattaya, Thailand. The meeting was to review the MRC work in 2017 and make a decision on future direction for the MRC in 2018, including approving the Annual Work Plan. 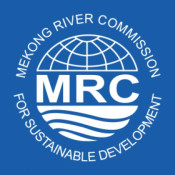 29 – 30 November 2017, Pattaya, Thailand, The Council Meeting is an annual ministerial meeting by the Council Members (natural resources and environment ministers) of the MRC to review and come to mutual conclusions on the management and development of water and related resources within the framework of the Agreement on Cooperation for Sustainable Development of the Mekong River Basin (the 1995 Mekong Agreement). 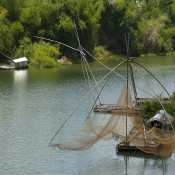 Siem Reap, Cambodia, 20 November 2017 – Targeting a 10-percent increase in fish abundance in the Mekong and Sekong Rivers by 2021, fisheries experts from Cambodia and Lao PDR shared today the progress in fish monitoring activities that set a baseline, and continued discussions on the formation of a joint fisheries management plan to reach that goal. 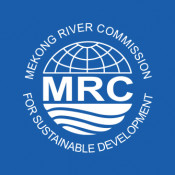 16 November 2017, Vientiane Capital, Lao PDR – Yesterday, the Mekong River Commission (MRC) officials met to prepare for the 3rd Summit of prime ministers on 5 April 2018 in Siem Reap to be hosted by the Kingdom of Cambodia. A series of activities and deliverables are planned leading up to the Summit and included in the Annual Work Plan for the organization for next year. China’s Mekong development plan have stirred debate as potentially becoming an environmental and social peril for downstream Mekong countries. China’s navigation channel improvement plan has recently attracted attention from environmentalists, activists, to the media alike. More so since mid of this year, when news reported waterway clearance by China was progressing into Thailand. The Bangkok post in several of its articles reported China’s rock-blasting plan would damage the Mekong 1, and most recently claimed ‘the environment will never be the same’.2