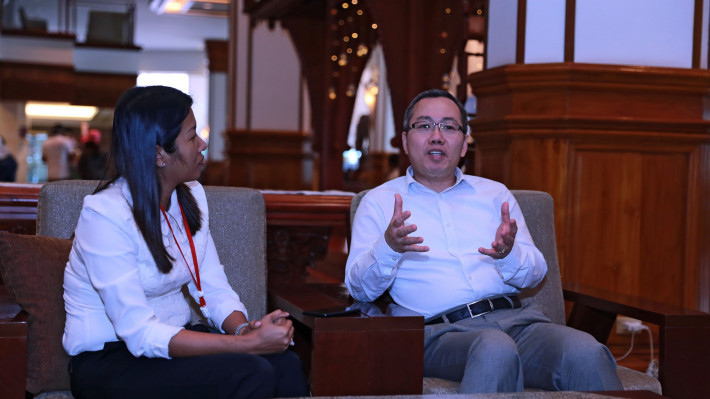 Taking a closer look at the MRC’s prior consultation process, Khmer Times

About 200 people representing civil society, academics, the private sector, governments and development partners have gathered in Laos for the Mekong River Commission’s regional forum. Today, participants discussed the Lao-proposed Luang Prabang hydropower project and An Pich Hatda, chief executive officer of the MRC Secretariat, spoke with Khmer Times about the prior consultation process.

KT: Can you tell us more about the Luang Prabang hydropower project?

Mr Hatda: The Luang Prabang project is for a run-of-the-river dam with an installed capacity of 1,460MW of electricity. It belongs to Laos under a joint investment between the Lao government and PetroVietnam Power Corporation. The project sits between the proposed Pak Beng [hydropower] project on the upstream and the completed downstream Xayaburi project. It’s located about 25km from Luang Prabang town or around 2,036km from the Mekong Delta. It’s the fifth dam proposed on the Mekong mainstream to have been submitted to the MRC for prior consultation. The other four projects include the Xayaburi, Don Sahong, Pak Beng and Pak Lay.

KT: What is the MRC’s prior consultation process?

Mr Hatda: The prior consultation is a process under the Procedures for Notification, Prior Consultation and Agreement, or PNPCA. It’s a process for MRC member states and other stakeholders to discuss and review benefits and associated risks of any proposed water-use project which may have potential significant cross-border impacts on the Mekong river flow regimes, water quality and other environmental and socio-economic conditions.

Any member intending to proceed with this kind of project is required to notify the other countries and provide them with available data and information. The process aims for our governing body, the Joint Committee, to reach an agreement to achieve optimal use and prevention of wasting water and to issue a decision that contains agreed-upon conditions for the project.

In fact, the prior consultation is not about approving or disapproving the proposed water use; rather it’s designed for the notified countries and relevant stakeholders and communities to make recommendations and for the proposing country to accept certain measures to avoid, minimise and mitigate any potential adverse transboundary impact and to find a better way to share the benefits.

KT: There are complaints about the prior consultation process being ineffective because it does not provide enough room for a voice from affected communities. How do you respond to this criticism?

Mr Hatda: We’ve never claimed the prior consultation process is perfect. There are limits and challenges in the process we’ve gone through. That’s why we’ve improved the process, thanks to voices from various stakeholder groups. We believe the prior consultation process is unique and indispensable despite gaps, just like in the cases of Pak Beng and Pak Lay.

In both cases, there was a transparent sharing of information to the public. Stakeholders have acknowledged that without the process, a massive volume of documents, from feasibility studies to impact assessments of the proposed projects, would have never entered public space. The same goes for the improved design of the Xayaburi project that was publicly shared.

In addition to national stakeholder meetings, we’d done our best to reach out to, bring in and consult broader stakeholders in regional forums like this one. Informal dialogues were held, project documents were shared early, all relevant stakeholders at the regional level were invited openly, and facilitation was carefully crafted to ensure all voices were heard, and key concerns documented and fed into the process.

Without the prior consultation process, a big project such as the Pak Beng or Pak Lay on the mainstream of a major international river like the Mekong would not have been subjected to a second opinion. In the Pak Beng case, for instance, the MRC specialists and international experts reviewed the project documents to determine the projects’ alignment with the MRC’s Design Guidance on Mainstream Dams and to recommend measures for minimising and mitigating potential negative transboundary impacts. In its technical review, the MRC noted issues regarding the design and potential adverse impacts on downstream countries, fish passage, sediment transport, navigation lock design, and aquatic habitats.

And there is post consultation and engagement. Although the six-month consultation ended, the process itself didn’t end there. The Pak Beng and Pak Lay consultations both ended with the member countries agreeing on a Joint Action Plan that provides mechanisms beyond the six-month process for ongoing feedback, data exchange, and knowledge sharing between the developer and Lao PDR, and the MRC and stakeholders concerning the ongoing design, construction and operation.

KT: There are also complaints about a prior consultation process being flawed because during earlier projects it failed to adequately address concerns about impacts and requests for further studies. How do you respond to this?

Mr Hatda: I don’t think this is in the current context. The prior consultation is defined in the 1995 Mekong Agreement as neither a veto right nor a right to unilaterally proceed without taking the other riparian countries’ concerns into consideration. The current process focuses on identifying potential adverse transboundary impacts and measures to limit them. But we acknowledge the prior consultation process is not perfect, just like I’ve said earlier. It’s a living process with room for improvement where positive aspects can be built on.

For example, the Xayaburi project prior consultation – the first project ever submitted for prior consultation and the test cases for the MRC’s hydropower diplomacy – was not concluded with a statement as it was for the Pak Beng and Pak Lay. The MRC’s Joint Committee and the Council could not reach a unanimous conclusion and eventually referred the cases to the diplomatic channel. But because of the prior consultation, it prompted the four [MRC] member states to initiate a study on the sustainable development and management of the Mekong river including the impact from mainstream hydropower development projects, called the Council Study.

This is one of the massive studies the MRC has ever conducted to assess both positive and negative impacts of different water development scenarios on the lower Mekong basin. Findings and recommendations from the study are now being used in many of the MRC’s strategic plans, including the updated Basin Development Strategy as well as the review of submitted projects including Pak Lay and now Luang Prabang.

Considering lessons learned from both the Xayaburi and Don Sahong, we were informed that an environmental monitoring programme is essential for a proper impact assessment of mainstream dams and their potential impacts. That’s why we’ve come together to develop a Joint Environmental Monitoring for Mekong mainstream hydropower projects to ensure the environmental impacts of dams are properly assessed and possible environmental damage prevented.

KT: How do you respond to calls that the Luang Prabang prior consultation process should be cancelled until concerns raised in previous processes are addressed?

Mr Hatda: The decision to cancel or to move forward the submitted project does not rest with the MRC Secretariat, who is the administrative and technical arm of the MRC. Such a decision is a sovereign decision, while the MRC is mandated to consult its members and stakeholders on the project once submitted.

Under the 1995 Mekong Agreement, when a member wants to use the mainstream water from the Mekong basin within the same basin during the dry season and from the Mekong basin to another basin during the wet season, that country must notify the other members. Once receiving the notification, the notified states have to review the proposed water use project. This is where the prior consultation comes in.

KT: What are your plans to improve the Luang Prabang prior consultation process?

Mr Hatda: During this six-month consultation that will tentatively end in April 2020, we’ve increased the number of national consultations from two to three, while maintaining two regional stakeholder forums. With feedback from civil society organisations, we’re translating more documents to facilitate discussion and information sharing. Just this Monday, we also held informal dialogue with civil society organisations to listen to their concerns and explore an avenue for meaningful collaboration. For the first time, our members of the Joint Committee today are sitting in a panel to listen to stakeholders’ concerns and suggestions. We’re also exploring the advantages and disadvantages of conjunctive management of the mainstream and tributary cascades, as well as means of funding mitigation options.

But new thinking must be introduced slowly and judiciously. To help improve the process and to affect changes, regardless of our views about the project itself, I highly encourage and call on all interested stakeholders to contribute to the discussion, have your voices heard and officially documented.