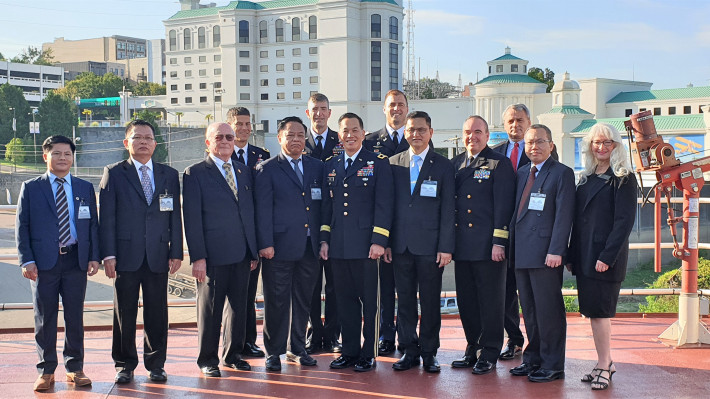 Public hearing from Mississippi, an example to increase community participation in a systematic structure

For the people living along the Mississippi River in the United States, 2019 was a critical year. It was the wettest year on record during the 1895-2019. Floods have endangered the lower basin resulting from a series of floods in tributaries and sets records for duration and total volume.

To protect the inland area, the U.S. Army Corps of Engineers (USACE) - the agency under the Department of Defense working on public engineering, design, and construction management - opened the Bonnet Carré Spillway which was a key flood control infrastructure in north of New Orleans for the second time in 2019. The action was to relieve pressure on the Mississippi River levees and protect communities in south Louisiana from flooding. Over its first 80 years in operation, the Bonnet Carré Spillway was activated just 10 times. This was the first time ever the spillway was opened in back-to-back years and twice in a year. However, the opening negatively affected aquaculture, riverine transportation and some communities in the Mississippi River.

The water ran into houses, eroded forestland and dept farmland into water, leading people to homeless, animals struggling for food and agricultural fields flooded. Out of the 220,000 hectares flooded in the Mississippi Delta, 100,000 were agricultural and it would take many years for farmers in the basin to recover after the disaster. The severe floods also dramatically influenced navigation on the Mississippi River with high speedy currents, high-level water that blocked waterways and locks closed to ensure safety for transportation on the river.  The floods interrupted commodity shipments, creating more pressure on commodity provision for the U.S. as Mississippi River is the most important riverine network in the country.  It was estimated that over 2 billion dollars was lost due to the disaster.

The Public Hearing process is critical for the Mississippi River Commission and the USACE. The hearings, engagements and dialogue help maintain a consistent connection - an exchange of viewpoints and ideas among the public, partners, stakeholders, elected officials, the Mississippi River Commission, the USACE and agencies from the private, state and federal sectors. This process provides a greater voice for those who live and work in the region in shaping federal management and policy on the river. Presentations by the public are made orally, and a copy of the remarks is presented to the commission for official record and written response.

This Public Hearing was the third meeting on the tour to hear public concerns and questions under the annual low-water inspection trip of the Mississippi River Commission on the Mississippi River from 19 -23 August 2019 in addition to three other meetings in Caruthersville, Missouri (19 August), Helena, Arkansas (20 August), and Baton Rouge, Louisiana (23 August).

Public hearing from Mississippi, an example to increase community participation in a systematic structure The Delegation of the Mekong River Commission had an opportunity to observe the Public Hearing of the Mississippi River Commission on 21 August 2019. The Public Hearing would make a good example for the MRC to consider for its public consultation and outreach activities to public from national to regional levels, especially for the update and implementation of basin-wide strategies and the Prior Notification, Prior Consultation and Agreement (PNPCA) process for hydropower projects on the mainstream. “The MRC Joint Committee and CEO could consider holding some kind of hearing with the public as part of the MRC Regional Stakeholder Forum or separately, engaging in open dialogue with relevant stakeholders to understand better and record their views and recommendations”, Dr. Anoulak Kittikhoun, Chief Strategy and Partnership, Mekong River Commission Secretariat shared. Lets learn the whole story through our article https://bit.ly/2mJ9lBi and our video here. #MRC #MekongRiverCommission #MississippiRiverCommission Music: bensound.com

The Public Hearing this time focused on many issues around flood impacts. USACE started the meeting by a welcome remark by Major General Mark Toy, President of the Mississippi River Commission and Commander of the USACE Mississippi Valley Division. General Mark Toy confirmed the support and readiness based on the Commission’s principles of Listening, Inspecting, Partnering and Engineering to the river and its people living in the basin. Then Commander of Vicksburg District Colonel Robert Hillard provided an overview on current Army Corps project issues in the Mississippi River and what USACE had been doing to manage the situation and the river.

Seventeen speakers addressing the Commission were there to raise concerns about damage to Mississippi and Louisiana fisheries from the 2019 River Flooding, nutrient levels in the River, climate change, the incomplete Yazoo Backwater Pumps, and the operation of the Morganza and Bonnet Carre Floodways. Fifteen-minute was allocated to those who voiced their opinions came from state government, non-governmental organisations and farmers living in the Mississippi River Basin.

The hearing started with Mississippi Secretary of State Delbert Hosemann, voicing concerns about the impact the floods on the Mississippi Gulf Coast. He claimed massive amounts of silt released through the Bonnet Carre Spillway resulted in a 95 percent loss in gulf oysters, which could take up to 10 years to recover. He requested to conduct studies on impacts of Bonnet Carre Spillway and Morganza Floodway on their operation and a separate environmental impact study.

On the other hand, Sierra Club, the National Wildlife Federation, and Healthy Gulf were three of the many organizations that had policy positions against building the Yazoo Backwater Pumps over the past 20 years. The audience of the hearing was touched by Warren County resident Lauren Stubblefield, a flood victim and seventh generation Mississippian, when she called for people to close their eyes and feel and imagine what happened to her family and the community during the recent flood and when its water went down to see the truth of life that they were living.

Major General Mark Toy and other Commissioners listened, exchanged views and took note of all the presentations and testimonies which were recorded into Minutes of Meeting for further deliberation by the Mississippi River Commission.

The Public Hearing would make a good example for the MRC to consider for its public consultation and outreach activities to public from national to regional levels, especially for the update and implementation of basin-wide strategies and the Prior Notification, Prior Consultation and Agreement (PNPCA) process for hydropower projects on the mainstream.

“The MRC Joint Committee and CEO could consider holding some kind of hearing with the public as part of the MRC Regional Stakeholder Forum or separately, engaging in open dialogue with relevant stakeholders to understand better and record their views and recommendations”, Dr. Anoulak Kittikhoun, Chief Strategy and Partnership, Mekong River Commission Secretariat shared.

The Mississippi River Commission, established in 1879, is composed of seven members, each nominated by the President of the United States and vetted by the Senate. Three of the organization’s members are officers of the USACE; one member is from the National Oceanic and Atmospheric Administration; and three members are civilians, two of whom are civil engineers. The President of the Commission is the Commanding General of the US Army Corps of Engineers Mississippi Valley Division, which oversees a large part of the Mississippi River. Two other military members are the commanding generals of other USACE divisions covering the basin. The USACE therefore provides core technical and operational support to the Commission.

General duties of the Commission include recommending policy and work programs, studying and reporting on the necessity for modifications or additions to the flood control and navigation project and conducting semi-annual inspection trips. The authority of the Commission extends the entire length of the Mississippi River from its headwaters at Lake Itasca, Minnesota, to Head of Passes, Louisiana, where the Mississippi River empties into the Gulf of Mexico.

The Mississippi River Commission brings critical engineering representation to the drainage basin, which covers 41% of the United States and includes 1.25 million square miles, over 250 tributaries, 31 states and two Canadian provinces.