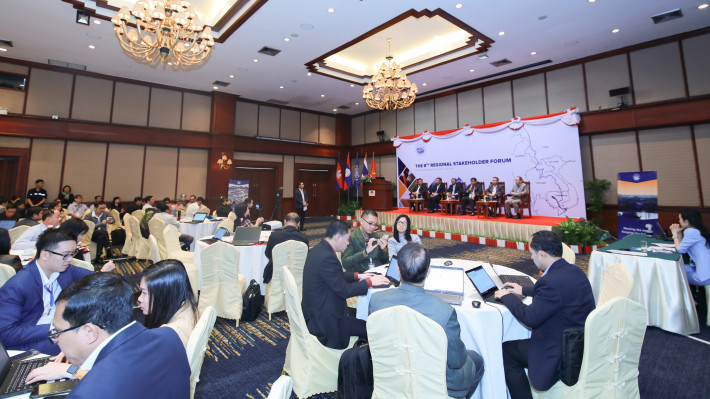 Vientiane, Lao PDR, 7 November 2019 – Opportunities to make the Mekong River Commission’s Prior Consultation process more meaningful should be explored, and the required data and information on the Lao PDR’s proposed Luang Prabang hydropower project should be supplied, according to a public regional forum organized by the MRC.

The two-day forum was to share information and consult broader stakeholders on the 1,460-megawatt Luang Prabang project on the second day as well as a development of the Mekong Basing Development Strategy 2021-2030 and MRC Strategic Plan 2021-2025 on the first day. Some 200 participants representing the civil society, academics, the private sector, development partners and governments of Cambodia, Lao PDR, Thailand and Viet Nam attended the forum that ended yesterday in Vientiane.

During the second day and for the first time, the participants had a rare opportunity to interact with, question and make their statements directly to the governing body of the MRC, the Joint Committee, who also oversees and decides the conclusion of the six-month process. 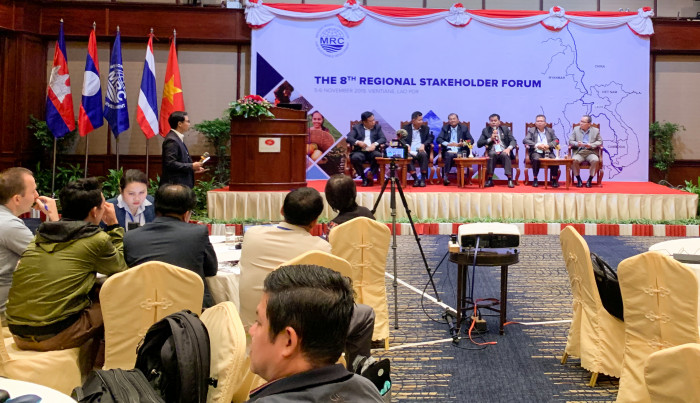 Members of the MRC Joint Committee and CEO of the MRC Secretariat come together in a hearing panel to listen to comments from stakeholders at the MRC’s 8th Regional Stakeholder Forum in Vientiane.

Following the discussion, the forum made various recommendations on the Prior Consultation process and for the project’s technical review report to be conducted by the MRC Secretariat.

A representative from the Viet Nam’s Center for Promotion of Integrated Water Resources Management Dr. Nguyen Nhan Quang said that “extending the six-month timeframe of the Prior Consultation process may not be likely. But opportunities are there for the pre and post process to be given more time”.

Mr. Kol Vathanna, who is the Deputy-Secretary General of the Cambodia National Mekong Committee, suggested that “the project’s documents should be made available to notified countries and stakeholders earlier and well before the six-month process starts to allow for a more meaningful engagement”.

According to the MRC’s Procedures for Notification, Prior Consultation and Agreement (PNPCA), the Prior Consultation process is set for six months. But it can be extended if there is a request and the Joint Committee unanimously agrees to it.

In responding to the comments from the floor, the representative of the Joint Committee member for Thailand Mr. Pradab Kladkempetch, who is also the Deputy Secretary General of the Thai National Office of Water Resources, acknowledged that Thailand itself had encountered the time challenge of the Prior Consultation process too.

MRC Secretariat Chief Executive Officer Dr. An Pich Hatda, who was also on the panel, noted the possible challenges of the extension, but pointed to other alternative avenues to be taken.

“The MRC really encourages the notifying country in the future to share documents earlier, which could give more time for review, check for completeness, prepare summary documents and translate into riparian languages during the pre-consultation process. A post-consultation process such as a Joint Action Plan can provide an on-going interaction mechanism and is another avenue to address the lack of time including the engagement of different parties,” he said.

Against the backdrop of the time pressure of the Prior Consultation process, the participants, having listened to and discussed hydrology, hydraulics, sediment, dam safety, navigation, water quality, fisheries and socio-economic issues of the proposed hydropower project, made various recommendations for the project’s technical review report, to be conducted by the MRC Secretariat.

Some researchers at the forum asked whether a baseline or reference point on the submitted fish assessment report was presented. They added that to judge if the mitigation measures were effective, the baseline would be very important and this should be supplied. According to the MRC Secretariat’s preliminary review, it noted that the developer’s assessment of the number of fish specifies in the area was comparable with the MRC data and that many of the fish passage design features were inline with the MRC design guidance.

They further suggested that operation rules of other dams on the mainstream as well as on the tributaries be assessed and considered for the operation of the Luang Prabang dam. Specifically, they urged the developer to assess the impacts of cascade operation on the water level fluctuation downstream of the Xayaburi dam to avoid low flow condition due to operation.

While the participants noted there was a good inclusion of 15 additional secondary sites for sediment sampling, they found that no further description or locations were provided, nor was any evident plans for sediment management.

In response to the comments and suggestions, a representative from the project developer Luang Prabang Power Company Limited said the company would cooperate with both the Lao government and MRC in sharing more information through established procedures. 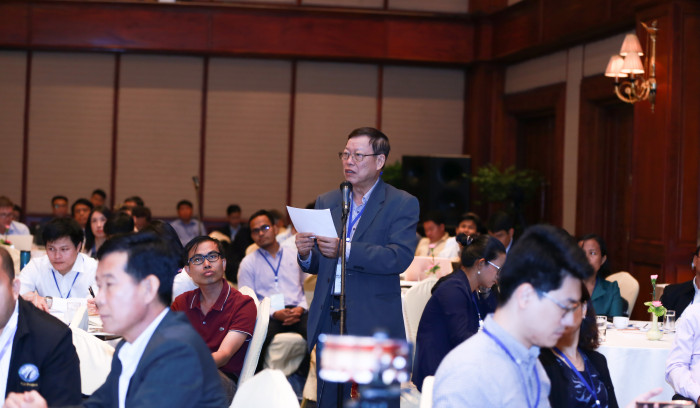 Dr. Nguyen Nhan Quang, former Director of Viet Nam’s Center for Promotion of Integrated Water Resources Management, asks the Members of the MRC Joint Committee on the prior consultation process at the forum in Vientiane.

Other stakeholders used online media channels to raise their concerns, particularly on tributary dam operation and information sharing with downstream countries. Concerns were also raised how the MRC was going to assess the potential transboundary impacts from the project.

All key stakeholder recommendations were recorded and will be included in the forum report, which will then be considered and reflected in the technical review report (TRR). The TRR will include technical assessments of the proposed project, and it will be submitted to the MRC member countries, especially the proposing country, for their consideration and for possible inclusion in a Statement and Joint Action Plan to be approved by the MRC Joint Committee.

Reassuring the participants of Lao PDR’s commitment, Mr. Chanthanet Bualapha, Secretary General of the Lao National Mekong Committee and Member of the MRC Joint Committee for Lao PDR, said that “we live together in the same Mekong River and Laos will undertake all reasonable efforts to ensure potential significant harms are avoided and mitigated as they would affect not only other Mekong citizens but the Lao peoples”.

Mr. Vithounlabandish Thommabout, Deputy Director General at the Lao Ministry of Energy and Mines, in addition to following the MRC design guidance, made references to many recent laws and regulations of Lao PDR that strengthened the planning, assessment and monitoring of major projects including the Luang Prabang. These included the amended Electricity Law 2017 and updated Policy on Sustainable Hydropower Development 2018.

The regional stakeholder forum complements national consultations and allows stakeholders who may not have the opportunity to participate in the national meetings to voice their concerns and learn more about proposed projects and the prior consultation process.

This is the fifth time the MRC has carried out the Prior Consultation for mainstream hydropower projects, including the 1,285-MW Xayaburi dam, the 240-MW Don Sahong, the 912-MW Pak Beng, and the 770-MW Pak Lay.

The Prior Consultation process on the Luang Prabang hydropower project officially began on 8 October 2019 and will continue until April 2020. By that time, the Joint Committee Working Group, a technical advisory body of the MRC, will deliberate recommendations to be submitted to the MRC Joint Committee for decision in concluding the six-month process.

The next regional stakeholder forum for the proposed Luang Prabang hydropower project will take place early February next year.

The extremely low flow, slow drop in the river sediments, and presence of algae on the sand and bedrock river bottom are some of the possible causes why the Mekong River has recently acquired an aquamarine color, says the Mekong River Commission. This phe