» Home » Our Work » Topics » Hydropower
Back

The Mekong River is a driver of economic growth, supporting the lives of millions by providing energy, food, water, and incomes. Yet growth depends on the river’s health and demands energy. Energy demand for the Lower Mekong River Basin (LMB) is projected to grow at 6-7% annually, and riparian countries are capitalising on hydropower potential.

Hydropower development in the Mekong began years ago in tributary basins of Thailand and Viet Nam, upstream of Cambodia. Over the last decade, hydropower development has expanded in the LMB, accompanied by increased private sector investment in power infrastructure. On the mainstream, 11 projects are planned, with seven in Lao PDR, two in Cambodia and 2 across the Lao-Thai border. Of these, two – Xaiyaburi and Don Sahong - have become operational and four more have been notified to the MRC for Prior Consultation Process.

Hydropower development in the LMB brings both positive and negative consequences. According to the MRC Council Study on the Sustainable Management and Development of the Mekong River Basin including Impacts of Mainstream Hydropower Projects, the LMB could see economic gains from full hydropower development of more than $160 billion by 2040. Development of hydropower brings synergies with other water related sectors as well, including expanding irrigation that is key to food security, provides access to electricity that is key to poverty reduction, contributes to navigation that enhances regional trade, and provides flood management and drought relief that is important part of adapting to climate change.

But those benefits come with potential costs. The decline of fisheries could cost nearly $23 billion by 2040. The loss of forests, wetlands, and mangroves may cost up to $145 billion. With further reduction of sediment due to dams and sand mining, rice growth along the Mekong will be severely curtailed. Fish farms, irrigation schemes, and expanding agriculture could offset these losses, although with uneven results between countries. 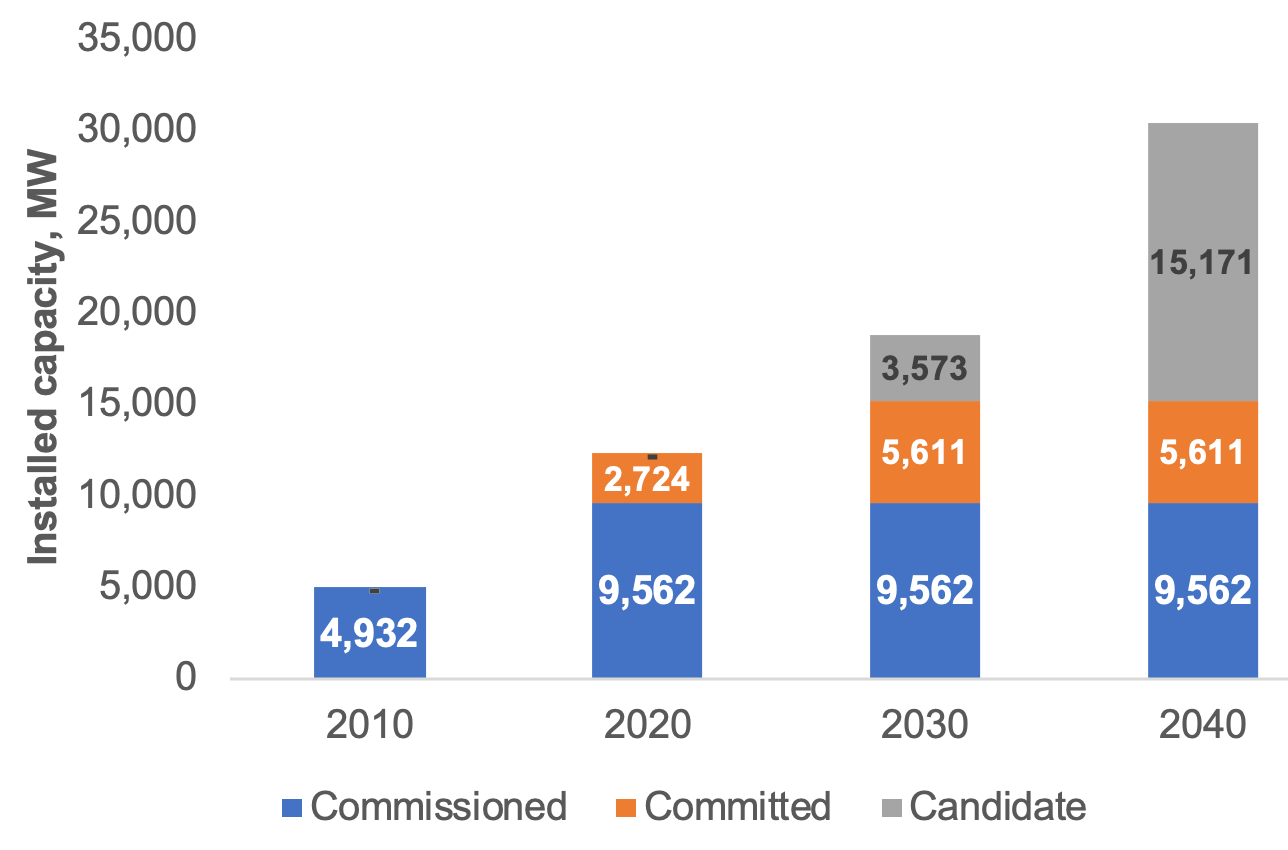 In the Upper Mekong River Basin (UMB), extensive hydropower development has also occurred as part of China’s development strategy. China has constructed 11 hydropower dams, of which two are large storage dams, along the mainstream in the Upper Mekong Basin. Another 11 dams, each with production capacity of over 100 MW, are being planned or constructed. The total production capacity is estimated at 31,605 MW, increasing from 21,310 MW. The overall economic value of hydropower in the UMB-China is estimated at US$ 4 billion per year. The UMB-China dam cascade (see Figure 2) has led to significant increases in dry season flows, considerable reductions of wet season flows, and impacted the sediment budget of the Mekong River system.

Although on a much smaller scale, hydropower is starting to be developed in a tributary of the UMB-Myanmar, with the first dam commissioned in 2017 and construction of further dams by both Chinese and Myanmar developers expected. Figure 2: Sub-basins, major rivers and evaluation of the UMB in China

In response to this dynamic situation, the Mekong River Commission (MRC) focuses on advancing regional cooperation for the sustainable management of the growing number of hydropower projects from a river basin management perspective. The MRC supports countries through:

In the hydropower sector, the MRC is tasked to help ensure that increasing demand for electric energy in the Member Countries is met without causing detrimental effects on the environment or local communities – an aim which requires a hydropower strategy that is based on best practices.

The first Hydropower Development Strategy (HDS) was formulated in 2001 in recognition of the MRC’s role as a river basin organisation for regional co-operation on sustainable hydropower development, utilisation, and management in the Mekong River Basin. Through the HDS, a variety of studies, guidelines, and tools were developed to provide guidance for the MRC’s involvement in hydropower development activities.

In 2008, the Initiative on Sustainable Hydropower (ISH) was established to advance regional cooperation and assist the Member Countries in relating decisions on hydropower management and development to basin-wide Integrated Water Resources Management (IWRM) perspectives. The Initiative developed knowledge platforms and networks enabling the Member Countries to routinely exchange information, share experiences, and collaborate on tools and practices in sustainable hydropower (see below).

The MRC Strategic Plan (SP) 2016-2020 underlined the rising sense of urgency among stakeholders for the need to move basin development towards more optimal and sustainable outcomes that could address long-term needs, including environmental protection as well as ensuring water, food and energy security. In order to achieve these goals, the Member Countries agreed to update the HDS 2001 by taking into account major changes in the basin that had occurred over the last 18 years. The update strategy, now called the Sustainable Hydropower Development Strategy (SHDS), also identifies opportunities to enhance benefits beyond national borders and minimise adverse transboundary impacts. The SHDS, expected to be finalised in 2021. An agreed set of strategic priorities and actions will be implemented to ensure delivery of the SHDS objectives.

In addition, the updated Preliminary Design Guidance (PDG) for Proposed Mainstream Dams in the LMB (2009) is being finalised to provide design guidance in the form of performance targets, design, and operating principles for impact mitigation measures in key areas reflecting the current hydropower development situation and international good practice. The updated PDG formed the basis for the development of guidelines for hydropower environmental impact mitigation and risk management in the lower Mekong mainstream and tributaries.

In relation to measures to mitigate the adverse impacts from water resources development, the MRC will continue to work with countries to integrate the various regional products developed over recent years into national systems. For instance, the Transboundary Environmental Impact Assessment (TbEIA) guidelines into national policy and regulations, and the updated PDG into the planning and management of hydropower.

Over the years, the MRC has conducted the following key assessments and studies related to hydropower:

The MRC has produced various knowledge products to facilitate decision-making and planning for sustainable development of the LMB, including strategies, guidelines and studies mentioned above.

Handbook on Mainstreaming Gender into the Mekong River Commission’s Core Functions and Activities: A Guidebook for a Gender-Responsive and Resilient Lower Mekong River Basin (3.8 MB)

Sustainable Hydropower Development Strategy: A Basin-wide Strategy for a Changing Mekong River Basin (4.9 MB)
Back
TOP
This website uses cookies to analyse how our site is used and optimise functionality. Navigating this site means you accept our use of cookies. Accept