The Story of Mekong cooperation 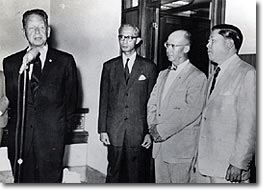 Opening of Mekong Committee office in Bangkok by Dag Hammarskjold(left), Secretary-General of the United Nations, 1959

Regional cooperation between Cambodia, Lao PDR, Thailand and Viet Nam dates back to 1957 when the Committee for Coordination of Investigations on the Lower Mekong Basin—The Mekong Committee — was set up under a statute endorsed by the United Nations.

At the time it was the largest single development project the UN had ever undertaken. No international river body had ever attempted to take on such encompassing responsibilities for financing, management and maintenance of water resources. Back then, the Mekong was considered one of the world’s greatest and untamed rivers and there were signs of interest to capitalise on its economic potential.

In 1977, Cambodia left the organisation due to the unstable political climate, resulting in the establishment in 1978 of the Interim Mekong Committee comprising Lao PDR, Thailand and Viet Nam.

The knowledge base of the Mekong has been growing exponentially from those early days back in the 1950s, when teams of experts travelled up and down the river and its tributaries on boats, jeeps, and even on the backs of elephants, measuring and sampling, and cataloguing a treasure trove of natural resources. The hundreds of surveys and studies from this work was the beginning of the information storehouse that is today maintained and supplemented by the successor of the Mekong Committee, the Mekong River Commission (MRC).

On 5 April 1995, Cambodia, Lao PDR, Thailand and Viet Nam signed the Agreement on Cooperation for Sustainable Development of the Mekong River Basin (the Mekong Agreement), in Chiang Rai, Thailand. The agreement, which established the MRC, was a coming-of-age for the river basin agency. No longer under the umbrella of other organisations, the management responsibility of the Commission is in the hands of its four Member Countries.

As a platform for regional cooperation, the MRC has made progress towards implementation of the 1995 Mekong Agreement. It started a process for basin development planning in 1997 that takes into account the needs of all people in the basin, particularly the poor and those who rely on water resources for food and income. The MRC has also developed a consultative process that allows riparian countries to have an input into a range of possible development scenarios including hydropower schemes and the effects of climate change. The activities of the MRC are defined through an Integrated Water Resources Management strategy that has begun to shape a common transboundary understanding of the evolution of long-term planning.

The MRC member states cooperate under a set of five water-related procedures for exchanging and sharing data and information, monitoring water use, notifying and consulting with other members about diversions and uses of Mekong waters; maintaining flows along the Mekong mainstream and water-quality rules. The procedures determine how Cambodia, Lao PDR, Thailand and Viet Nam develop, use, conserve and manage the resources of the Mekong River as the economies of the region become more closely integrated in the 21st century.

1995 Mekong Agreement and the Procedures