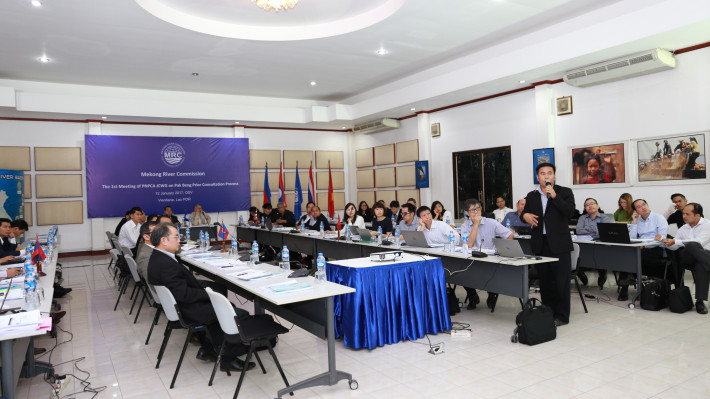 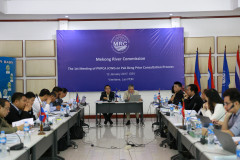 This first meeting of the PNPCA JCWG was informed and discussed several key issues that require advanced proper attention and common understanding and agreement to ensure successful implementation of a six-month prior consultation process of the proposed Pak Beng hydropower project with the aim of increasing the joint benefits and cooperation.

At the opening remark, Dr Inthavy Akkharath, Chairperson of the Meeting, Acting Secretary General of the Lao National Mekong Committee and Joint Committee Member for Lao PDR, said: “The Prior Consultation will allow us as the MRC Member Countries and other relevant stakeholders to discuss and provide views on the Pak Beng hydropower project.” He emphasized: “We will review if the Pak Beng projects reflects a reasonable and equitable use of the Mekong River System and how it could be done to avoid, minimize and mitigate the negative impacts, especially the ones of transboundary nature.”

At the end of the meeting, the participants agreed that the starting date for the 6-month Prior Consultation is counted from 20 December 2016. A Regional Stakeholder Meeting in February 2017 and a field visit to Pak Beng in April 2017 will be organized to exchange and share information, investigate the site, and discuss and document legitimate concerns.

“We are pleased with the discussion and agreement on a range of issues today which set a clear milestone and timeframe of the 6-month Prior Consultation process of the Pak Beng Hydropower Project”, said Pham Tuan Phan, CEO of Mekong River Commission Secretariat (MRCS). “We hope that with the MRCS supports, at the end of the 6-month process, the Joint Committee can come up with clear decision and recommendations for Pak Beng hydropower project. “

The Pak Beng Hydropower Project is a run-of river project located in the Mekong mainstream. The power plant is planned to have an installed capacity of 912 MW, designed to discharge the flow of 5,771.2 cubic meters per second.

The Lao National Mekong Committee Secretariat submitted on 4 November the detailed description of the planned project to the MRC Secretariat for its review and further action to inform the other member countries about the project’s scope and other requirements under the prior consultation process.

The prior consultation is part of the MRC’s procedural rules on cooperation on water use of the Mekong mainstream: the Procedures for Notification, Prior Consultation and Agreement (PNPCA). Under the procedures, any infrastructural project using the mainstream water during the dry season within the same basin, as well as during the wet season between two basins, must undergo the prior consultation process. Applicable projects include large-scale irrigation and hydropower development which may cause significant impacts on the environment, water flow and quality of the Mekong mainstream.

In the prior-consultation process, with technical and administrative support from the MRC Secretariat, the notified member countries would review technical aspects of the project, assess any possible impact on the environment and livelihoods along the riparian communities, and suggest measures to address those concerns. The member countries aim to come to an agreement on how the consulted case should proceed. It is not meant to approve or not to approve the proposed project. This process normally lasts six months, but could be extended further by the JC.

The MRC so far experienced two prior consultation cases – Xayaburi and Don Sahong hydropower projects, both of which are in the Mekong mainstream in Lao PDR. In the two cases, neither of them reached an agreement at the JC level and were referred to the MRC Council, the organization’s highest body with the ministers from the four countries. The Council was also unable to reach a unanimous conclusion on the cases.

For Xayaburi, however, the process has prompted the Lao government and the developer to conduct its own environmental impact assessment and to invest additional $400 million to revise its dam’s design to address the issues of fish migration and sediment, two of the main concerns raised during the prior consultation.