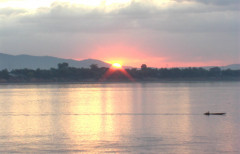 Lao PDR insists process is complete, while other lower Mekong countries raise concerns on impacts and gaps in technical knowledge and mitigation measures

Cambodia, Lao PDR, Thailand and Viet Nam today agreed that a decision on the prior consultation process for the proposed Xayaburi hydropower project be tabled for consideration at the ministerial level, as they could not come to a common conclusion on how to proceed with the project.

The four members of the Mekong River Commission (MRC) reached the conclusion at the MRC Joint Committee (JC) Special Session in Vientiane as they came together to discuss the proposed hydropower project, the first on the mainstream of the lower Mekong Basin.

The JC Members agreed that there is still a difference in views from each country on whether the prior consultation process should come to an end.

At the meeting Lao PDR insisted there was no need to extend the process since this option would not be practical, while transboundary environmental impacts on other riparian countries are unlikely.

The other MRC countries, Cambodia, Thailand and Viet Nam, however raised their concerns on gaps in technical knowledge and studies about the project, predicted impact on the environment and livelihoods of people in the Mekong Basin and the need for more public consultations.

“We appreciate all comments, but we will consider to accommodate all concerns,” said Viraphonh Viravong, head of the Lao Delegation.

Lao PDR also noted that an extension to conduct further studies will require much more time than 6 months and it will not be possible to satisfy all parties’ concerns.

The Xayaburi project will comply with the MRC Secretariat Preliminary Design Guidance and best practices based on international standards, said the Lao delegate, adding major impacts on navigation, fish passage, sediment, water quality and aquatic ecology and dam safety can be mitigated at acceptable levels.

Other MRC Member Countries however expressed a range of concerns on the proposed scheme and provided some further recommendations.

Cambodia said that more time may be required for the notifying country and its project developer to fulfill gaps in technical requirements and for effective consultations among the Member Countries and with the public.

Cambodia stated that there was a need for a comprehensive study and assessment of transboundary and cumulative environmental impacts. Cambodia added that the enabling countermeasures and solutions to mitigate such impacts need to be clearly developed, while other measures such as benefit sharing to affected countries, transboundary environmental management and social funds need to be jointly put into practice.

“With the limited information related to the Project, Cambodia therefore suggested the Prior Consultation period be extended,” said the country in its official response.

Acknowledging the important role of the project in Lao PDR’s development plan, Thailand responded that in moving the project forward, precautionary and mitigation measures should be conducted for the sake of the people and environment in the region.

Citing concerns being raised in its national consultations on environmental degradation such as losses of fisheries and wetlands and the lack of clearly-identified mitigation measures, Thailand said it was concerned about the way of life of the people depending on the river.

Thailand also raised concerns from public forums that the sustainability of the project is still questionable, and that the stipulated timeframe for the prior consultation process is insufficient and should be extended.

“Therefore, we would like to see that public views and concerns are well taken into consideration,” said Jatuporn Buruspat, Director General of Thai Department of Water Resources in the official response to the project.

Meanwhile, Viet Nam expressed its deep and serious concerns for the lack of adequate, appropriate and comprehensive assessments of transboundary and cumulative impacts that the project may cause to the downstream, especially in the Mekong Delta.

Viet Nam recommended the deferment of this and other planned hydropower projects on the Mekong mainstream for at least 10 years.

“”The deferment should be positively seen as a way to provide much-needed time for riparian Governments to carry out comprehensive and more specific quantitative studies on all possible cumulative impacts,” emphasized Dr. Le Duc Trung, Head of the Vietnamese delegation.

Viet Nam added that the limited timeframe of the consultation process was inadequate to facilitate the achievement of the process. “The deferment would enable the country to secure better understanding and the confidence of the public and local communities,” said Mr. Duc Trung.

The JC Members will report the outcome of the meeting today to respective ministers in their countries.

The PNPCA process itself is the formal mechanism in place to enable one or more individual Member Countries to submit an individual project for the 4-country regional consideration. In the case of the Xayaboury dam project, the Government of Lao PDR notified the MRC to begin the PNPCA process.

The Xayaboury hydropower project would be the first such project on the Mekong mainstream downstream of China and would be capable of generating 1260 megawatts of electricity, mainly for export to Thailand.

The Xayaboury dam is located approximately 150 km downstream of Luang Prabang in northern Lao PDR. The dam has an installed capacity of 1,260 MW with a dam 810 m long and 32 m high and has a reservoir area of 49 km2 and live storage of 225 Mm3. The primary objective of the Xayaboury dam project is to generate foreign exchange earnings for financing socio-economic development in Lao PDR. The developer is Ch. Karnchang Public Co. Ltd. of Thailand who negotiated a tariff agreement with EGAT in July 2010.

The Special Session of the MRC Joint Committee is held aiming to reach a conclusion on the prior consultation process for the Xayaburi project. The three notified countries provided official responses to the proposal to the meeting.