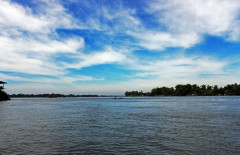 Vientiane, Lao PDR, 19 June 2015—The four members of the Mekong River Commission (MRC): Cambodia, Lao PDR, Thailand and Viet Nam have agreed that a decision on the prior consultation of the proposed Don Sahong Hydropower Project be taken to the governmental level because they could not come to a common conclusion on how to proceed with the project.

The issue had already been deferred to the MRC Council after a special session on 28 January 2015, when the MRC Joint Committee (JC) could not reach an agreement. The MRC Council, is the highest governance body of the Commission consisting of water and environment ministers from the four Member Countries.

After further deliberations the MRC Council announced that there are still differing views among the countries on whether the prior consultation process should come to an end, and that the matter must now be referred to their respective governments for resolution.

Article 35 of the 1995 Mekong Agreement stipulates that in the event that the Commission is unable to resolve a difference or dispute, the issue shall be referred to the governments “to take cognizance of the matter for resolution by negotiation through their diplomatic channels …” If they find it necessary or beneficial, the governments can resort to mediation by mutual agreement according to the principles of international law.

The six-month prior consultation officially started on 25 July 2014. Over the course of the process, the Member Countries discussed and evaluated the risks and benefits of the project, which will produce 260 megawatts of electricity and will be located in one of the braided channels in the Mekong River’s Siphandone area in southern Laos.

The notified Member Countries have expressed a range of concerns on the proposed project and have requested an extension of the prior consultation to have more time to collect additional data.

Lao PDR proposed to bring the prior consultation to a close stating that they had considered and addressed the legitimate concerns of the other Member Countries in accordance with the stipulated Procedures for Prior Notification, Prior Consultation, and Agreement (PNPCA), under the 1995 Mekong Agreement. They added that they will continue to cooperate with the MRC and that they are committed to ensuring the sustainable development of the project.

After the matter reaches the governmental level, the governments may communicate their decision to the MRC Council for further proceedings, if necessary, to carry out such decision.

The MRC is the inter-governmental organisation established to promote regional cooperation and facilitate dialogue on the sustainable management of the Mekong Basin among governments, the private sector and civil society. It is not a supra-national or regulatory body. The commission looks across all sectors including sustaining fisheries, identifying opportunities for agriculture, maintaining the freedom of navigation, flood management and preserving important ecosystems. Superimposed on these are the future effects of more extreme floods, prolonged drought and sea level rise associated with climate change.

The Procedures for Notification, Prior Consultation and Agreement (PNPCA), established under the 1995 Mekong Agreement signed by the four countries, specify that the types of project that require the Prior Consultation include any water uses on the mainstream during the dry season which may have significant impact on the river flow regime and water quality.

The Prior Consultation is one of a number of protocols in the 1995 Mekong Agreement to promote cooperation in sustainable management of the basin's water resources and avoid regional disputes from developing. According to the Mekong Agreement, the prior consultation is not a right for any Member Country to veto the project, nor is it a right for a country proposing the project to go ahead with it without taking into account the others’ rights.

The Notification process is a prerequisite for the development of any water use project proposed for a tributary, which may have a significant impact on the mainstream, or for the Mekong mainstream during the wet season without inter-basin diversion. It requires a notification to the MRC and submission of relevant project information to enable the notified Member Countries to foresee the project’s water use and any significant impact that might stem from this.

The prior consultation is not a process to seek approval for the proposed project. It is a platform for the notified countries (Cambodia, Thailand and Viet Nam) to raise and discuss their concerns on potential effects the project may have on their territories. It is also an opportunity for Lao PDR, who proposed the project, to better understand those concerns and to consider measures to address them.

For more information on the PNPCA, the Don Sahong prior consultation and access to the project documents please go to: http://www.mrcmekong.org/news-and-events/consultations/don-sahong-hydropower-project/

The International Cooperation and Communication Section, Office of the Secretariat in Vientiane