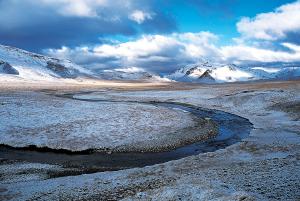 Source of the Mekong River

Taking a “whole basin” approach through cooperation with the upper riparian countries is crucial for the sustainable management of the Mekong River Basin. Just one year after the signing of the 1995 Mekong Agreement, the MRC began to forge its successful alliance and working relationship with its Dialogue Partners, namely the People’s Republic of China (China) and the Union of Myanmar (Myanmar).

China and Myanmar have demonstrated an increasing commitment to cooperation, including sharing more data and information on the status of upstream developments and joint capacity-building activities.

In 2002, the MRC’s cooperation with China under the Dialogue Partner relationship was strengthened with the signing of a Memorandum of Understanding (MOU) on the provision of daily river flow and rainfall data from two monitoring stations in Yunnan Province during the wet season. These data help improve the MRC’s regional daily forecast of downstream water levels at key points on the Mekong River during the flood season. In turn, these forecasts can save lives and reduce damage to property and crops.

In 2013, both parties renewed the agreement and China extended the period for sharing data from four to five months (from the beginning of June to the end of October). It also agreed to increase the frequency of the data sent to the MRC from once to twice a day, and expressed its willingness to share the data during the dry season in case of drought emergencies. The extension of the agreement was a sign of continuous trust between the MRC and China.

In recent years, the MRC Secretariat has cooperated with Myanmar in a number of areas, such as improving the MRC’s hydro‐meteorological coverage by exchanging relevant monitoring and water-quality data and sharing technical expertise in flood prevention and management. A number of areas, such as navigation safety, strategic environmental assessment, and continued sharing of hydro‐meteorological data with Myanmar, have been explored with potential for future technical cooperation.

Enhanced cooperation with China and Myanmar is crucial for the sustainable management of the Lancang‐Mekong Basin where flow conditions and sediment delivery downstream have already been modified by hydropower and climate change. Building on the Dialogue Partner arrangement, future cooperation may include institutionalising a more extensive information sharing system on river flows and reservoir operations as well as joint technical studies and capacity-building in flood and drought management.