Every year, environment and water ministers of Cambodia, Lao PDR, Thailand and Viet Nam meet to discuss emerging issues related to the Lower Mekong Basin. As Council Members of the Mekong River Commission, they convene to review and come to mutual conclusions on the management and development of water and related resources within the framework of the 1995 Mekong Agreement.

Then, the MRC Joint Committee, which comprises senior officials at no less than Head of Department level of the four countries, and supported by national line agencies including the Ministry of Foreign Affairs, takes these decisions and policies forward by putting them into actions. The committee meets twice a year and reports to the Council. It functions as a Board of Management.

The MRC Secretariat is the operational arm of the organisation and performs technical and administrative functions under the management of a Chief Executive Officer. It facilitates regional meetings of the Member Countries and provides technical advice on joint planning, coordination and cooperation. It also works closely with the four countries’ coordinating bodies, the National Mekong Committees (NMCs), and other state agencies. The People’s Republic of China and the Union of Myanmar engage as Dialogue Partners. 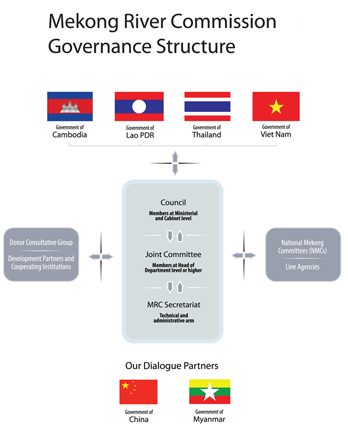 A new structure for the Secretariat and a leaner, more efficient MRC:

At the first MRC Summit held in Hua Hin, Thailand, in 2010, the Heads of Government of Cambodia, Lao PDR, Thailand and Viet Nam decided that by 2030, the MRC Secretariat (MRCS) would be financially self-sustained by the Member Countries. They also encouraged the MRC to explore modalities for the transfer of the implementation and financing responsibilities of some river basin management activities to the Member Countries. This was the start of the ongoing organisational structure of the MRC.

Up until December 2015, the Secretariat’s structure consisted of 12 programmes under four divisions, operating out of two main offices with a staff of approximately 180 people, and a budget of US$20 million, mostly from donor governments (Development Partners). In line with the ongoing structural and operational reform, as well as the new Strategic Plan 2016-2020, the MRC has set up a transitional structure to gradually prepare for the final structure that could be in place already by 2020.

The MRC Council approved the new structure at its 22nd Meeting, in January 2016. It consists of the Office of the Chief Executive Officer (OCEO) and four Divisions: Administration Division (AD), Planning Division (PD), Environmental Management Division (ED), and Technical Support (Division). It will have 66 professional and support staff. 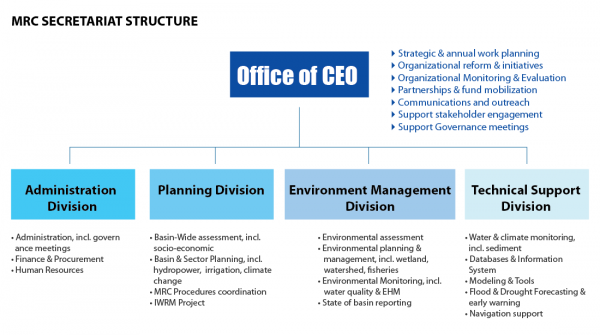 The MRC has three core functions: