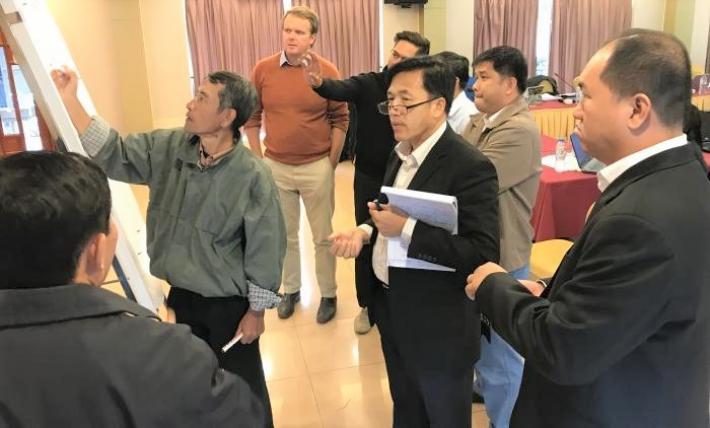 Project teams of the Sesan-Srepok and Mekong Delta from Cambodia and Viet Nam discuss bilateral cooperation mechanisms during a workshop in Hanoi on 29 January. ©MRC

Teams of the Sesan-Srepok and Mekong Delta water resources management projects held a two-day workshop in Hanoi from 29 January to strengthen provincial cooperation between Cambodia and Viet Nam to address transboundary water issues such as cross-border flood control and coordinated planning of water infrastructure development.

About 15 water experts from both countries exchanged ideas on potential cooperation, based on field assessments on needs and gaps in the existing cooperation mechanisms between the border provinces.

During the workshop, the teams agreed that three kinds of parallel cooperation mechanisms – a bilateral provincial body, a technical expert group, and an emergency response planning team – would be necessary to enhance bilateral provincial dialogue. The teams said that they would strengthen the existing bilateral provincial bodies to put water-related issues on the table, enhance the function of the existing technical expert group to help address water issues such as flood management, water allocation and water quality control, and establish a new joint team to plan emergency responses to flooding and other disasters.

The bilateral projects are part of the five transboundary projects under the Mekong Integrated Water Resources Management Project (M-IWRMP), which facilitates better cooperation among the four Mekong countries of Cambodia, Lao PDR, Thailand and Viet Nam at local levels to respond to local water-related issues promptly. The five projects are coordinated by the Mekong River Comission and financed by the World Bank.

“We have been cooperating for four years to increase cooperation between the two countries, contributing to the sustainable development of the Mekong basin,” said Nguyen Thi Thu Linh, Deputy Director General of the Vietnamese National Mekong Committee who co-chaired the workshop. “The IWRM project has created a great opportunity for us to work together to resolve transboundary issues with effective cooperation mechanisms.”

Through these projects, Cambodia and Viet Nam have identified priority areas of cooperation. In the Sesan – Srepok basin where a cascade of hydropower dams has altered water flow regimes, both countries have decided to work together on flow monitoring, flood forecasting and mitigation measures for environmental impacts, among other issues. In the Mekong Delta, which is affected by upstream hydropower developments, water extraction for irrigation and climate change, the two countries have agreed to look into issues in hydro-infrastructure development, climate change impacts and inland waterway navigation.

With the proposed parallel cooperation mechanisms to support such cooperation, the two project teams are expected to further develop joint action plans to address priority issues by the end of 2018, and commence the implementation of pilot activities in early 2019. 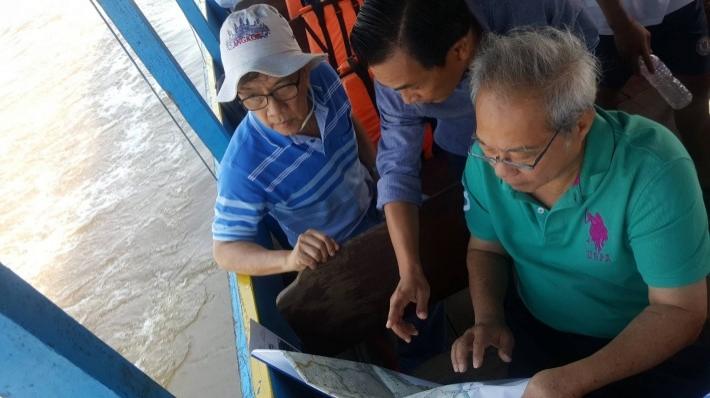 Two out of the five bilateral projects to enhance transboundary dialogue have completed all planned activities and are now focusing on the preparation of final papers to capture the essence of their learning.

One of the documents, known as the Implementation Report, captures lessons learnt from the project’s joint activities, including field visits and production of video stories for knowledge sharing, and local solutions to help restore fish stocks, prepare communities for extreme weather events such as flood and drought, and empower women with income generating activities.

The other report further explores the livelihoods of the riverine communities, sustainability of the lake resources and lake governing system for the development of practical recommendations for the respective governments to build better lake governance.

At a meeting in Cambodia’s Siem Reap province on 13 February, the bilateral team of the Tonle Sap-Songkhla lake communications project exchanged views to finalise the papers and visited the Tonle Sap’s Prek Toal’s community to learn about its unique ecosystem.

“It is important to document what we have learnt from each other so that we can communicate it to our communities and other interested stakeholders to call for their support to protect the lake’s resources,” said Sin Viseth, Director of the Department of Exploitation and Conservation Control of Cambodia’s Tonle Sap Authority.

The reports are due in mid-2018 upon the completion of the project. Key recommendations in the final reports are expected to be incorporated into national development plans for promoting healthy lakes. 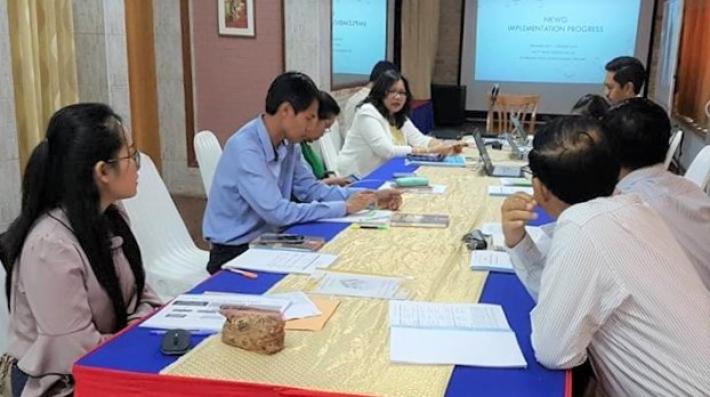 Wetland management project teams from Lao PDR and Thailand are finalising a joint report capturing knowledge exchange on community-based management of water resources in the Xe Bang Hieng and Nam Kam rivers, as the project is moving toward completion.

At a meeting in Thailand’s Sakon Nakhon province on 20 February, the bilateral team restructured the report and improved the draft content to include information on the integrated water resources management (IWRM) tools selected for river basin management at community level. The report will also record the process and results on the implementation of those IWRM tools, including enabling environment to promote effective water policy; institutional roles in managing resources; and management instruments to support river basin planning.

In addition, the project teams are finalising an action plan for managing water resources of Nam Kam and a strategic plan for preserving Mak Mee wetland of Xe Bang Hieng

The Xe Bang Hieng basin of Lao PDR and Nam Kam basin of Thailand are rich in wetland resources, which support the livelihoods of local populations. Both basins, meanwhile, face similar challenges threatening the resources such as increasing demand for water utilization and climate change.

The five bilateral projects are coordinated by each member country’s National Mekong Committee (NMC), which takes an active role in facilitating the work of line agencies and local working groups for the execution of those projects.

Here’s a brief report from the four NMCs.

Officials from line ministries and provincial departments participate in a consultation workshop on 23 January in Kampong Cham. ©CNMC

To improve the management of the shared water resources with Viet Nam, Cambodian teams of the Sesan-Srepok and Mekong Delta projects on 23 January consulted with officials from line ministries and provincial departments on the approval process and mechanisms for sharing of data and information with the Vietnamese counterpart.

Held in Kampong Cham province, the consultation workshop also discussed the development of a Web portal to promote the collection and dissemination of information on water issues between the two countries. Outcomes of the discussions will be further consulted at an expert group meeting and a stakeholder workshop planned for May, when the team will also identify appropriate solutions to address water management challenges.

Meanwhile, Tonle Sap Lake team for the sister-lake communications project on 25 January shared findings of a draft fish catch monitoring report with provincial officials and community members at a workshop in Battambang. It documents fish species, size and amount of catch in the Sangke and Pursat Rivers, both of which are the tributaries of the Tonle Sap Lake. Conducted from July to September 2017, the monitoring identified 54 types of fish caught, of which over 60 percent came from the Sangke River. The report will be used for future comparisons and assessment on fish situation. During the workshop, the team also showed awareness raising videos jointly produced with the Thai team on issues of unsustainable fishing, climate change and women empowerment.

In addition, the working group of the Mekong-Sekong fisheries project is drafting a fish monitoring report assessing catch rates, size, type of fish and other vital characteristics of five whitefish species migrating in long distances between the Mekong and Sekong rivers.

More than 30 officials and community members met in late January in Champasak province to review the current regulations for managing fish conservation zones at village and district levels. Organized under the Mekong-Sekong fisheries project, the team agreed to revise the existing regulations to better protect fish species while increasing the participation of local communities in the management of the fisheries. The activity is part of the development of a joint transboundary fisheries management plan with Cambodia aimed at improving fish resources along the selected border provinces.

Like the Cambodian partner, the Laotian team is finalising the assessment report of the five-migratory whitefish, which will enhance understanding about the situation of local fisheries, thereby promoting necessary actions for improving fish population in the boundary provinces.

The workshops, attended by more than 150 people altogether, reviewed the current approaches for managing water and related resources and proposed new methods for community-based plans by applying the IWRM tools that the team have identified. Those tools include a GIS for presenting project’s locations and interpreting information.

In addition, the wetlands project team on 28 March held a meeting with the project working group to discuss the status of natural resources in the pilot areas, including solutions to address watershed management issues. The meeting’s outcomes will be incorporated into a watershed development plan.

As the Tonle Sap-Songkhla lakes communication outreach project is near completion, the Songkhla team is working closely with their Cambodian counterpart to finalise two joint reports focusing on lessons learnt, such as the management of fisheries resources, climate change adaptation and income generation activities, and policy recommendations for promoting healthy lake.

Officials from provincial departments participate in a consultation workshop in late January in Hanoi. ©VNMC

Vietnamese teams of the Mekong Delta and the Sesan-Srepok river basins projects in late January held back-to-back meetings to brief relevant stakeholders from provincial departments of agriculture and natural resources about the first draft coordination mechanisms for sharing data and information on water flows in concerned areas bordering with Cambodia.

Held in Ho Chi Minh City, the project teams presented the proposed new mechanisms, including their purposes, structure, functions and how they could help address transboundary water issues in the projects’ areas. Participants provided feedback and recommendations for further improvement of the draft reports.

The briefings followed a series of consultations in various boundary provinces, where national experts, local authorities and community members reviewed the current transboundary cooperation mechanisms between Cambodia and Viet Nam in the Mekong Delta and Sesan-Srepok river basins, and proposed new cooperation approaches for the development of the joint coordination mechanisms with Cambodia.