» Home » News and Events » Media Releases » Water flow in Jinghong of China to decrease, but without significant impact downstream
Back

Water flow in Jinghong of China to decrease, but without significant impact downstream

Vientiane, Lao PDR, 8 April 2019 — The outflow of water at the Jinghong hydropower station in China will gradually decrease by almost half over a seven-day period in April, according to an official notification from China’s Ministry of Water Resources being copied to the Mekong River Commission Secretariat today. But no worrying trends are detected.

The decrease of water will be made to accommodate “the traditional activities on the Lancang (Mekong) River during the Water Splashing Festival of the Dai ethic group,” the notification said.

“Such a notification by China is useful and helpful to downstream countries and communities to prepare for any possible risks and to maximize their productivity along the Mekong mainstream,” MRC Secretariat Chief Executive Officer Dr. An Pich Hatda said.

According to the MRC’s observed and forecasting water level, Thailand’s Chiang Saen may see approximately 0.70 meter to more than one meter of the decrease of water level due to the decrease of the water flow from the Jinghong hydropower station during 12 – 21 April 2019.

But the flow changes in the lower reaches of the Mekong mainstream may not become obvious or cause any significant impact on the River or people from 13 to 30 April.

Some stations, including those from Lao PDR’s Luang Prabang to Cambodia’s Kratie, are on the other hands experiencing water decrease between 0.50 and 1.50 meters during the same period of 13-30 April. But no worrying trends are detected.

Based on a hydrological phenomenon, the inflow contribution of water from the upstream of Lancang-Mekong in China to the Mekong mainstream is about 20% in total during the dry season from November to May. The whole inflow of water into the lower Mekong basin is influenced more by tributaries and a direct rainfall distribution.

The MRC is an intergovernmental organization for regional dialogue and cooperation in the lower Mekong river basin, established in 1995 based on the Mekong Agreement between Cambodia, Lao PDR, Thailand, and Viet Nam. The organization serves as a regional platform for water diplomacy as well as a knowledge hub of water resources management for the sustainable development of the region. Both China and Myanmar are Dialogue Partners of the MRC. 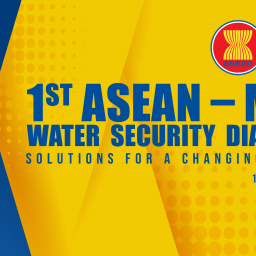