Vientiane, Lao PDR, 10 August 2018 – The Joint Committee Working Group (JCWG) for the Procedures for Notification, Prior Consultation and Agreement (PNPCA) of the Mekong River Commission has agreed on the starting date of a six-month prior consultation process for the proposed 770-MW Pak Lay hydropower project on the Mekong mainstream in Lao PDR.

The JCWG – whose membership comprises senior technical representatives from Cambodia, Lao PDR, Thailand and Viet Nam and who acts as an advisory body to the MRC’s Joint Committee in implementing the PNPCA – announced the decision after an extensive deliberation on the process during their first technical meeting that ended on 8 August in Vientiane. The working group set 8 August 2018 as the kick-off date.

“The prior consultation will afford the notified countries, the affected communities and related stakeholders an opportunity to review the project and raise their legitimate concerns on adverse cross-border impacts on the environment and people. It also allows the country proposing the project to better understand such concerns and to identify measures to address them,” said Mr. Te Navuth, Chairperson of the Joint Committee Working Group. 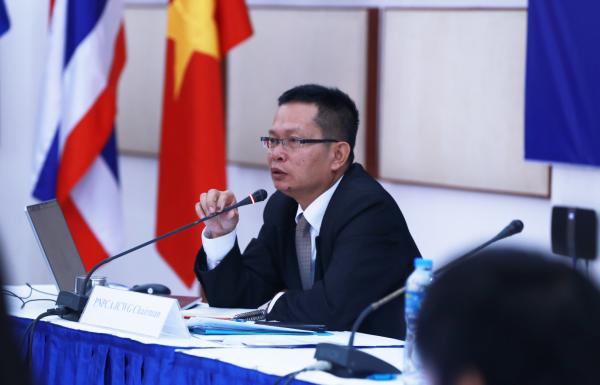 Chairperson of the Joint Committee Working Group for PNPCA for Pak Lay, Mr. Navuth Te, addresses the meeting that takes place in Vientiane.

The working group also discussed a proposal by the MRC Chief Executive Officer, Mr. Pham Tuan Phan, to postpone the prior consultation process. This, too, was in light of the announcement from the Lao Prime Minister the day before the meeting to inspect all dams and suspend the consideration of new investments in hydropower projects in Lao PDR. The Lao delegation agreed that the Lao government will provide official clarification soon.

“For the prior consultation process, MRC Secretariat will strive our best and fulfill our role, as stipulated under the PNPCA and 1995 Mekong Agreement, to facilitate consultations with stakeholders in good faith and systematically document their views and demonstrate how those views will be considered by the MRC governance bodies and provide feedback on them in a timely and transparent manner,” said CEO Pham Tuan Phan.

The prior consultation will involve two regional stakeholder forums and a field visit to the Pak Lay project during the six-month process. National stakeholder meetings in the Member Countries will also be organized to discuss and document legitimate concerns to feed into the process.

In the prior consultation process, with technical and administrative support from the MRC Secretariat, the notified Member Countries will review technical aspects of the proposed project, assess any potential transboundary impacts on the environment and livelihoods along the riparian communities, and suggest measures to address those concerns. The Member Countries aim to come to an agreement on how the consulted case should proceed. It is not meant to approve or disapprove the proposed project.

This process normally lasts six months, but it could be extended further, if required, by the Joint Committee, a body consisting of four Member Countries’ representatives at the head of department level where the consultation takes place.

On 13 June 2018, the Lao government, through its Lao National Mekong Committee, notified the MRC Secretariat of its intention to undertake the formal process of prior consultation on the Pak Lay hydropower project, the fourth Mekong mainstream dam to be submitted to the prior consultation.

The project’s total investment cost is estimated at USD 2,134 million with the construction expected to start in 2022 and the commercial operation to begin when the construction finishes in 2029. PowerChina Resources Ltd is named as the developer, according to the official notification documents from Lao PDR.