According to MRC’s observed water level data, the outflow at Jinghong hydrological station rose from 786 cubic metres per second (m³/s) on Monday last week to 1,020 m³/s today (22 February). In the Lower Mekong River Basin, the increase was more apparent from Chiang Saen in Thailand to Vientiane in Lao PDR, but less discernible in stretches of the river between Nakhon Phanom in Thailand and Savannakhet in Lao PDR, and Kompong Cham in Cambodia and the Mekong Delta in Viet Nam.

China’s Ministry of Water Resources said earlier this month that the outflow at Jinghong had been consistently in excess of 1,000 m³/s since the end of January.

This discrepancy between outflow estimates may be due to the use of different methods to calculate discharges at the Jinghong station. The Secretariat and China’s Ministry of Water Resources are now working together to provide more consistent water discharge information.

In October last year, China agreed to provide the MRC with year-round hydrological data from two stations located on the Upper Mekong mainstream, one at Jinghong and one on a tributary at Manan in China’s south-western Yunnan province. However, the agreement covers data on water levels, not discharge.

In related news, the MRC Secretariat has forecast that this year’s dry season will be wetter than in 2019 and 2020, with the rainy season likely to begin in early May. Normally, the monsoon rains begin in late May and end in October.

The MRC is an intergovernmental organisation for regional dialogue and cooperation in the Lower Mekong River Basin, established in 1995 based on the Mekong Agreement between Cambodia, Lao PDR, Thailand, and Viet Nam. The organisation serves as a regional platform for water diplomacy as well as a knowledge hub of water resources management for the sustainable development of the region. 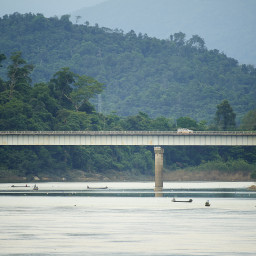