Vientiane, Lao PDR, 21 September 2021 – A meeting of the Mekong River Commission (MRC) and Dialogue Partners has given the go-ahead for a major joint study by all the six Mekong countries that will examine the changing hydrological conditions found in the entire Mekong River Basin.

The annual 25th Dialogue Partners meeting that includes the MRC together with representatives from China and Myanmar approved the proposed joint study with the Lancang-Mekong Cooperation (LMC) Water Centre. This approval followed the earlier green light by the MRC Joint Committee and LMC Joint Working Group on Lancang-Mekong Water Resources Cooperation.

Mr Phonepaseuth Phouliphanh, Acting Chairperson of the MRC Joint Committee for 2021, told the virtual meeting that took place on September 17 that “the need for the joint study is underscored by the Mekong River Basin’s increasing propensity for floods and droughts that have been attributed to adverse changes in climate and water infrastructures.”

He added the study would propose different adaptation measures, including better information sharing and coordination of water infrastructures, for the six Mekong countries to effectively address flood and drought risks and water fluctuations.

The joint study is due to be formally launched in December 2021 and will run until 2024. It consists of two phases, the first of which will take place during 2022 and is anticipated to yield immediate recommendations for actions. The second phase occurring in 2023–2024 will be implemented in coordination with the MRC’s Strategic Plan 2021–2025.

Countries along the Mekong River such as Myanmar, Viet Nam and Thailand are amongst the top 10 countries in the world exposed to significant climate change risks, according to the Global Climate Risk Index. Drought in the basin increased in frequency and severity between 2009–2011, 2012–2013, 2015–2016 and 2019–2020, the MRC’s data has shown.

Addressing the meeting, China’s Permanent Representative to the United Nations Economic and Social Commission for Asia and the Pacific Mr Ke Yousheng said, “China welcomes stronger synergy between the MRC and LMC to better contribute to the well-being of people and the sustainable development in the subregion.”

The Dialogue Meeting also discussed a mechanism of joint notification for water related emergency that will include water fluctuations, flood and drought, among the six Mekong countries. Since 2019, the MRC has monitored changes in flow regimes which have caused water fluctuations. In response the MRC is tabling these findings to be discussed with the rest of the MRC Member Countries – Cambodia, Lao PDR, Thailand and Viet Nam.

Separately, an MRC’s governance meeting, which took place a day earlier, has agreed to a new indicative date to conclude the prior consultation process of the 684-megawatt Sanakham dam. The decision by the MRC Joint Committee means the official six-month prior consultation process that began on 9 September 2019 for the proposed Sanakham dam, will now aim to cease on 19 January 2022.

The Joint Committee also agreed to a revised road map to carry out the prior consultation process, following a special session of the Joint Committee Working Group that assembled on 30 August 2021. Proposals for a rapid impacts assessment were discussed and the meeting agreed to allow the MRC Secretariat to begin the procedure with immediate effect.

It is expected the assessment process will take two months and that a preliminary results report is due by 29 October 2021.

“It is anticipated the assessment will provide up-to-date information to concerns raised by Member Countries and the public, during regional and national consultations, about potential transboundary negative impacts and to arrive at more informed management measures.”

The Sanakham dam is the sixth project to have been put forward to the MRC’s prior consultation process. The proposed site is located some 155 km north of Vientiane and is estimated to cost $2.073bn. It will be developed by Datang (Lao) Sanakham Hydropower company, a subsidiary of China’s Datang International Power Generation Co. Ltd.

The MRC Joint Committee meets twice a year to discuss management, organization, and cooperation matters as well as policy and strategic issues. 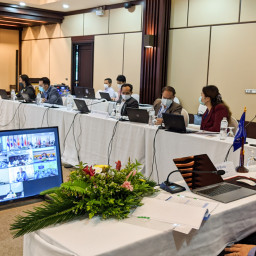