Vientiane, Lao PDR, 5 September 2019 – The Mekong River flood has now reached Thailand and Lao PDR, while over the next few days will land on Cambodia.

Based on the Mekong River Commission’s flood forecasting, the water level at Thailand’s Khong Chiam reached its flood level yesterday when the water was recorded at 15.29 meters. Over the next three days, it will increase by about 0.50m, rising from 15.72m today to 16.23m on September 8.

The station’s flood level – a situation where the water level reaches a full riverbank and creates an overland flow on the low-lying area – is set at 14.50m.

Lao PDR’s Pakse water level also reached its flood level yesterday when the water was recorded at 13.06m, which is one meter higher than the station’s flood level of 12m. It is expected to rise slowly from 13.75m today to about 14m over the next five days. 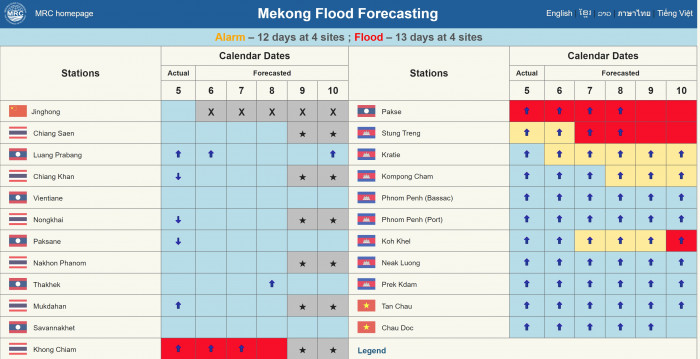 A screen grab showing the Mekong River water levels along key stations in the lower Mekong basin from September 5 - 10.

“Heavy rainfall, brought by the Tropical Cyclone PODUL during August 31 to September 3, over the middle part of the lower Mekong basin from Mukdahan of Thailand to Pakse of Laos has caused a sudden water increase in the Mekong River. Most rivers and other water bodies in the areas are now flooded,” said Dr. Sothea Khem, River Flood Forecasting Specialist at the MRC Secretariat.

He added that with continued rainfall over the next few days, the water levels, at least, at Cambodia’s Stung Treng and Koh Khel will come to their flood levels.

In Stung Treng, the water is now at its alarm level, a situation when a flood level is forecast within the next three days. It rose from 10.82m yesterday to 11.59m today, representing an almost one-meter rise over a day. With this speedy increase, the station is expected to hit its flood level (12m) on September 7 when the water rises to 12.20m.

In Koh Khel, the water level will slowly increase from 7.07m today to about 8m over the next five days, landing slightly on its flood level of 7.90m on September 10.

Cambodia’s Kratie and Kompong Cham stations are expected to hit their alarm levels, too, over the next few days.

Tomorrow, Kratie’s water level will slightly reach its alarm level (22m) when the water rises from 21.67m today to 22.25m. It is expected to increase by about 0.60m over the next four days, putting the station close to its flood level of 23m.

In Viet Nam, the two monitoring stations – Tan Chau and Chau Doc – will see some increase of water level between 0.2 and 0.40m over the next five days. But they will still be about one meter below their alarm levels.

“During this flood season, we will monitor the Mekong River water levels closely on a daily basis and share this information with our Member Countries for their dissemination to the local communities,” Dr. Sothea said.

During the flood season the MRC’s Regional Flood and Drought Management Center provides daily flood forecasting for key stations along the Mekong mainstream from Chiang Saen of Thailand to Tan Chau and Chau Doc of Viet Nam. The Commission also provides real-time information on warnings for flash floods from rainfall events over a given duration, known as Flash Flood Guidance, over the lower Mekong countries of Cambodia, Lao PDR, Thailand and Viet Nam, based on Satellite Rainfall Estimate, a global hydro-estimator satellite system.

All the information is made available on the Commission’s website: www.mrcmekong.org.