Vientiane, Lao PDR, 22 June 2018 – The Mekong River Commission (MRC) and Japan International Cooperation Agency (JICA) have launched a joint study on forest conservation and river basin management in the lower Mekong basin as part of their effort to better manage and conserve the environmental health of the basin.

The launch was announced at a kick-off meeting held today in Vientiane, Lao PDR, where the MRC and JICA signed the project’s memorandum of cooperation in the presence of 40 officials from both sides. 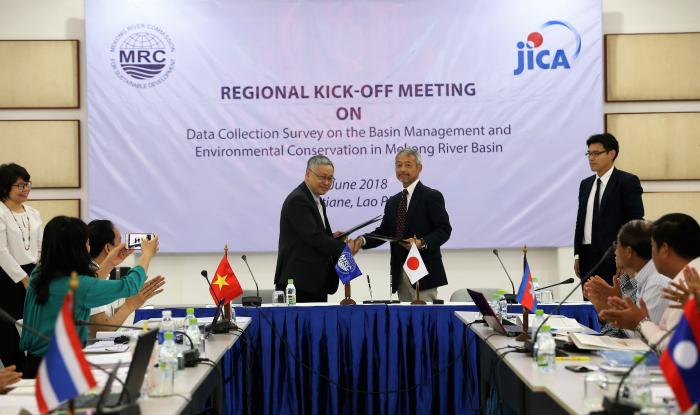 Financed by the Japanese Government through JICA, the project will cover five Mekong countries, including Cambodia, Lao PDR, Thailand, Viet Nam and Myanmar and finish in March 2019.

“The project allows us to gauge the current state of forest cover and conservation in our member states and Myanmar and provide countermeasures in terms of policy recommendations for quality basin-wide management for forest preservation,” says MRC CEO Pham Tuan Phan.

The Japanese Government is one of the long-time development partners of the MRC, actively providing financial support to the Commission since 2001 in many areas, including flood and drought management, irrigation, safe navigation, climate change and environmental management.

“Japan joins the MRC in its crucial mission to strike the right balance between development and nature conservation to achieve sustainable development for the basin,” says JICA Senior Deputy Director General Morita Takahiro. “We will pool our knowledge, technology and resources to assist the MRC in finding solutions to environmental problems facing the basin today.”

The project was an initiative of the Japanese Prime Minister Shinzo Abe, who expressed his intention at the 8th Mekong-Japan Summit in Vientiane in September 2016 to start a study to contribute to environmental conservation, in particular the protection of forest resources, in the Mekong River basin. An expert team at JICA has since been working to develop the project.

Early this year, the MRC also launched two joint projects between Cambodia and Lao PDR, and Cambodia and Thailand to better manage the Mekong basin resources and address flood and drought issues. The projects focus on transboundary development planning of water resources management in the Khone Falls region between Cambodia and Lao PDR, including monitoring of environmental impacts from the Don Sahong project; and joint assessment and planning for flood and drought management in the border areas of Cambodia and Thailand, which suffer from frequent flooding.

These two join projects received funding from the German government through Deutsche Gesellschaft für Internationale Zusammenarbeit (GIZ) until March 2019, while three others that were developed at the same period still need funding support.