Released today, the MRC’s Situation Report, which explores hydrological conditions in the LMB during January-July 2020, preliminarily identifies multiple possible causes of the low flows and drought this year. Among these are abnormal low rainfall affected by the El Nino weather phenomenon, prolonged low flow conditions carried over from 2019, and lower water flow contributions from the Mekong tributaries.

The low flows have caused Cambodia’s Tonle Sap Lake to experience “extremely dry conditions”, with reverse flows at their lowest on record since 1997.

Using available monitoring, rainfall and weather data from the MRC and other global sources, the report adds that operations of the mainstream dams in the Upper Mekong Basin and the tributary dams in the LMB may have affected the present low flow conditions. However, the MRC Secretariat has been unable to obtain official data and information to verify the potential impacts of storage operations in the upper basin.

“We call on the six Mekong countries to increase data and information sharing on their dam and water infrastructure operations in a transparent and speedy manner with the MRC. It is time to walk the talk and to act in the common interest of the entire Mekong River Basin and the affected communities,” says Dr An Pich Hatda, the MRC Secretariat’s Chief Executive Officer. 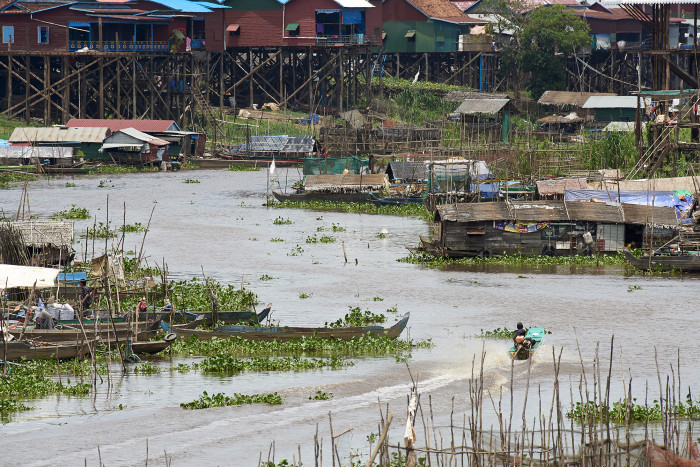 A man rides his machine boat along the Tonle Sap Lake in Kampong Khleang, passing floating houses on silts.

The 32-page long report points out that the current low flows could have severe impacts on Cambodia due to a loss of fisheries and irrigation potential. Viet Nam may experience reduced productivity in the Delta rice bowl, and agricultural productivity in Lao PDR and Thailand may also be affected.

In particular, the report maintains that there could be an ecological imbalance due to significant changes of timing, duration and extent of inundations in the Tonle Sap Lake and its surrounding floodplains. This could in turn lead to reduced reproduction through a loss of nursery areas, affecting the growth of fish and other aquatic animals and plants. A reduction in fish catch is predicted, threatening food security for the most vulnerable communities in the region.

The Tonle Sap Lake is the largest and most productive inland lake in Southeast Asia. It is considered one of the world’s biodiversity hotspots, and the Mekong’s main fish factory. The reverse flows into the lake usually occur from mid-May to mid-October, lasting for 120 days on average. However, this year, reverse flows at normal volumes have not yet occurred, although two extremely small instances were experienced in July.

The report suggests that the MRC Member Countries – Cambodia, Lao PDR, Thailand and Viet Nam – consider warning water users and operators of the situation to ensure water use is managed carefully if the water levels during this 2020 flood season do not significantly improve. The countries should seek alternative water sources to ensure the availability of water supplies.

The report also says that the Member Countries should request hydropower operators and irrigation operators to adjust their near-term operations and monitor potential bank erosion.

If the low flows persist, according to the report, the four countries should consider requesting China to discharge a “water supplement”, as they did in 2016, to relieve the situation in the LMB, especially during the upcoming dry season.

Outlook for the 2020 wet season

While the forecasts for rainfall over the remainder of the 2020 wet season vary from agency to agency, the general prognosis is that August and September rainfall may be higher than normal, tapering off in October, the report says.

With depressions, storms or typhoons forecast in August and September, the report adds that reverse flows into the Tonle Sap Lake could be happening now, with an expected larger volume than the first two instances.

Today’s river monitoring data from the MRC indicates that, in general, water levels across the LMB have risen and this trend is expected to continue into next week.