» Home » News and Events » Media Releases » Greater transparency in data sharing and cooperation will improve management of the Mekong River, says MRC
Back

In its commentary note on the Eyes on Earth study exploring the effect of Chinese dams on the natural flows of the Mekong River, the MRC said that improved sharing of data and information will enhance Cambodia, Lao PDR, Thailand and Viet Nam’s ability to manage the shared water resources for mutual benefits and to address misunderstandings.

“The need for all the countries along the length of the Mekong to strike a balance between the benefits of development, social justice, and environmental sustainability is so paramount. A transparent data sharing arrangement on how water and related infrastructures are operated will help everyone manage risks and avoid misperception,” Dr An Pich Hatda, the MRC Secretariat’s Chief Executive Officer, said.

The effects of hydropower dams along the Upper Mekong River (the Lancang River in China) on water flows in the Lower Mekong are well known and documented by several MRC’s studies, including the latest State of the Basin Report 2018, and the Council Study (Study on Sustainable Management and Development of the Mekong River including Impacts of Mainstream Hydropower Projects).

The 13-page long commentary note, released today, said that more scientific evidence was necessary to conclude that the 2019 drought was in large part caused by water storage in Upper Mekong dams.

“Our preliminary analysis, using rainfall data from 2008 to 2019 and observed water flows, showed that the 2019 drought was due largely to very low rainfall during the wet season with a delayed arrival and earlier departure of monsoon rains, and an El Nino event that created an abnormally higher temperature and higher evapotranspiration,” the commentary note read.

“In 2019, the monsoon rains began almost two weeks late and stopped about three weeks earlier than usual,” it added. “The basin lost about five weeks of rain and only received about 75% of rainfall as compared to previous years.” 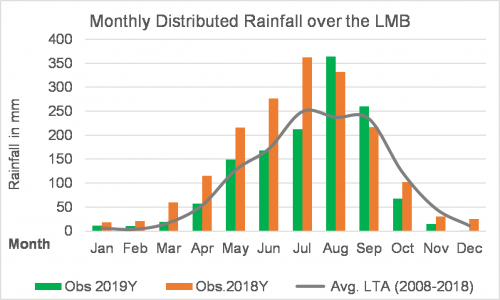 An MRC’s graph showing monthly change of distributed rainfall over the Lower Mekong Basin from January through December between 2008 and 2019.

The note added that the MRC has maintained a continual record of water flows in the Mekong mainstream, and compared this to longer term records, documented in its Procedures for the Maintenance of Flows on the Mainstream, known as the PMFM.

Citing the PMFM, the note said that flows from China were higher than normal for the 2019 and 2020 dry seasons. It added that in March this year, while the mainstream flows at Vientiane were at record low flows, these record low flows did not persist further downstream.

According to the same note, from January 2020, flows at Kratie in Cambodia were also higher than typical for the dry season. It further noted that the drought reported in the Mekong Delta was a meteorological (a situation when dry weather patterns dominate a certain area for a period of time), not hydrological (a situation when low water supply becomes evident, usually after many months of a meteorological drought) phenomenon.

Moving forwards, the MRC has set in motion a raft of initiatives to reinvigorate its data, information, modelling, forecasting, and communication systems.

By upgrading its information-sharing capabilities, and tailoring these to the information needs of the Member Countries, the MRC is preparing the ground for a more comprehensive upgrade of its Decision Support Framework that can monitor the condition of the river, and identify the causes of change. By providing accurate, up-to-date information, decision makers and the public will have the means to address emerging issues, such as low flows and reduced rainfall, rapidly and effectively.

“To achieve this, cooperation from all the riparian countries and their timely and transparent sharing of data and information on water use and infrastructure is pivotal,” Dr Hatda said.