China commits to continue and enhance cooperation with the MRC

Vientiane, Lao PDR, 7 November 2014—China’s Vice Minister of Water Resources, H.E. Mr. JIAO Yong, yesterday expressed the goodwill of his country to continue and enhance the cooperation with the Mekong River Commission (MRC) during his visit to the MRC Secretariat in Vientiane, Lao PDR.

Mr. JIAO Yong stressed that the cooperation could be enhanced by exchange visits and other activities. He particularly emphasised that China would work with the MRC on a joint scientific study on water flow fluctuations of the Mekong-Lancang River and on the organisation of the 2nd MRC-Ecosystem Study Commission for International Rivers (ESCIR) Symposium, among other existing and upcoming activities.

The study will be a joint assessment of water level fluctuation at hydro-met stations in the Chiang Saen District of Chiang Rai Province in northern Thailand, and in Vientiane, Lao PDR.

As a Dialogue Partner of the MRC, China participates in the MRC’s International Conferences, the four-yearly Summits and the annual Dialogue Meetings. It also joined the Junior Riparian Professionals (JRP) Programme, the MRC’s on-the-job training for young professionals from the four Member Countries, China and Myanmar. As part of the cooperation China co-organised the first MRC-ESCIR Symposium in 2012. During his visit, the Vice Minister also announced that China will participate in the MRC’s Basin Development Planning Forum on 20-22 November in Siem Reap, Cambodia.

In terms of dam operations, the Vice Minister said that China plans to build a regulating reservoir to manage and control the fluctuation in water levels from the water releases of the Jinghong and Nuozhadu dams. He added that, if needed, China may reach out to the MRC’s experts during the development of this project. China emphasised that the operation of their larger dams on the Mekong-Lancang go beyond the purpose of generating electricity and include also flood control, water supply and ease of navigation.

The Vice Minister appreciated the MRC’s assistance in disseminating correct information about water flows on the Mekong-Lancang.

China has been a Dialogue Partner of the MRC since 1996. The MRC and China cooperate in several areas including navigation, water resources, and hydropower development, through activities such as knowledge and information exchange and technological and technical exchanges.

The MRC is the inter-governmental organisation established to promote regional cooperation and facilitate dialogue on the sustainable management of the Mekong Basin among governments, the private sector and civil society. It is not a supra-national or regulatory body. The commission looks across all sectors including sustaining fisheries, identifying opportunities for agriculture, maintaining the freedom of navigation, flood management and preserving important ecosystems. Superimposed on these are the future effects of more extreme floods, prolonged drought and sea level rise associated with climate change.

In 1996 the MRC held its first Dialogue Meeting with its Dialogue Partners, China and Myanmar.

On 1 April 2002, the People's Republic of China signed an agreement on the provision of hydrological information on the Mekong-Lancang River. Under this agreement China now provides water-level data in the flood season from two stations located on the Lancang River in China. This information is fed into the MRC's flood forecasting system. China contributes 13.5 per cent of the flow of the Mekong River. 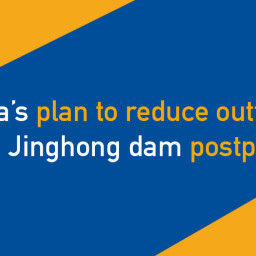 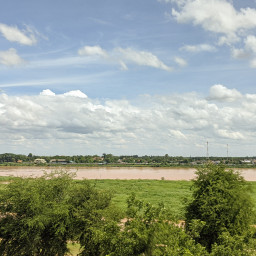 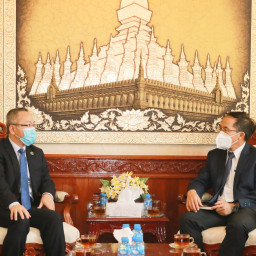 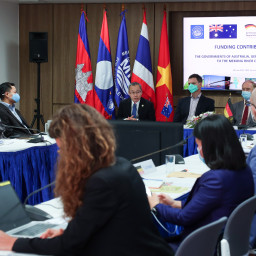