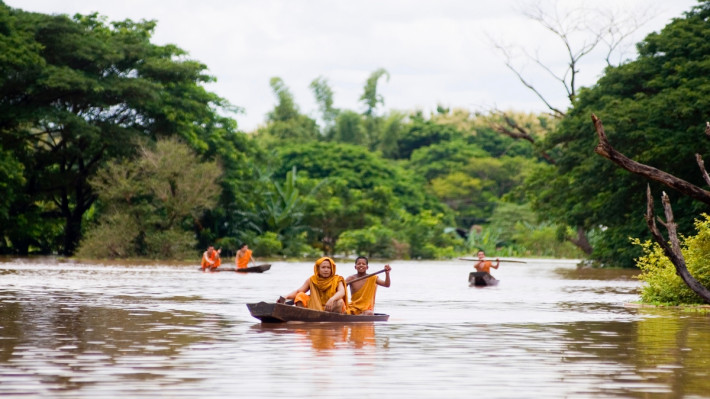 June to October is the wet season in the Lower Mekong Basin (LMB); with the exception of two brief transition periods (see Figure 1 below), the rest of the year in the LMB is the dry season. The wet season results from the flow of moisture-laden air from the Indian Ocean in the summer. During the rest of the year, high-pressure systems over the Asian continent give rise to the dry season in the LMB.

The climate of the Lower Mekong Basin (LMB), which is almost always hot and often humid, is classified as tropical monsoonal. In the warmest months of March and April, average temperature ranges from 30°C to 38°C. Cooler temperatures prevail from November to February. At higher elevations in the Lao People’s Democratic Republic (PDR), winter temperature averages 15°C.

The distribution of mean annual rainfall over the Basin follows a distinct east-to-west gradient. In the LMB, the rain-soaked uplands in the Lao PDR and Cambodia receive the most precipitation (3,000 mm) and the semi-arid Khorat Plateau in northeast Thailand the least (1,000 to 1,600 mm). The Upper Mekong Basin is similar to the LMB in that rainfall is regulated by the global monsoon system. In the Upper Basin, annual rainfall can be as little as 600 mm in the Tibetan Plateau and as much as 1,700 mm in the mountains of Yunnan. 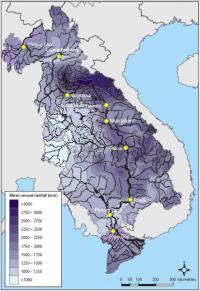 Countries in the LMB are among the most vulnerable locations in the world with respect to climate change. While the future impact of climate change is difficult to forecast, projections for the Mekong River Basin for the next 20 to 30 years, based on a downgraded global climate model, are as follows:

MRC 2005. Overview of the Hydrology of the Mekong Basin. Mekong River Commission.