The Tibetan Plateau extends over 2.5 million km2, of which about 316 km2 drain into the headwaters of the Mekong River. Located at 5,160 m above sea level, the plateau is the source of the Mekong and the most densely glaciated region on earth.

The Three Rivers Area is a rugged mountainous region in China where the Mekong runs alongside two of the region’s other great rivers: the Salween and the Yangtze. Separated from the other rivers by high mountain ranges, the Mekong flows through a deep ravine, with no significant tributaries in this stretch.

Located south of the Three Rivers Area, this highland and plateau area in China is still relatively elevated (2,000-3,000 m above sea level), transitioning to mid- and lowland reaches as the Mekong flows down a steep gradient, broadening as it goes. Small tributary catchments drain into the river from both sides of the mainstream. 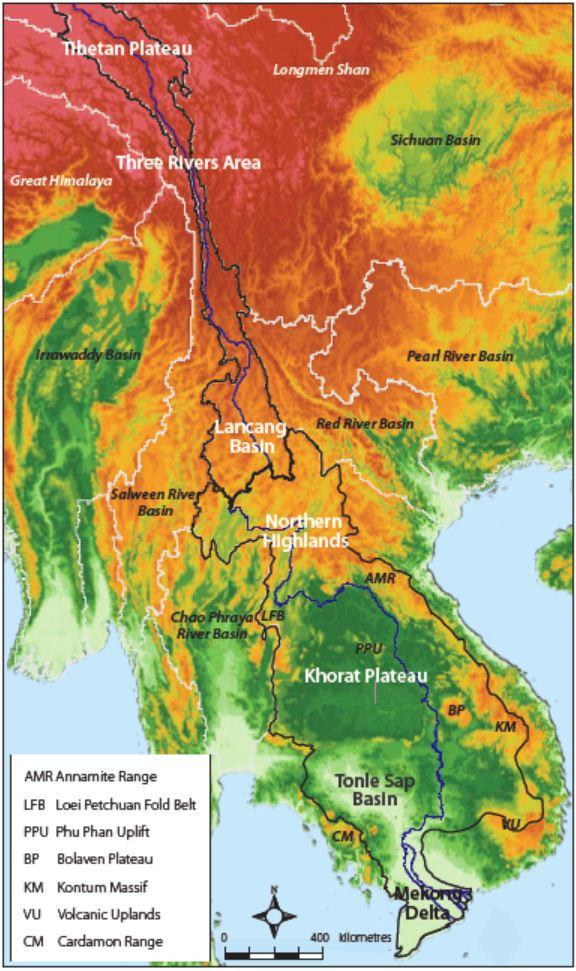 The Lower Mekong River Basin is functionally subdivided into four geographic regions. With a total catchment area of about 571,000 km2, the basin covers a large part of northeastern Thailand, almost the entire countries of Lao PDR and Cambodia, and the southern tip of Viet Nam.

Lying largely within northeastern Thailand, the Khorat Plateau is a vast, low-lying terrain consisting mainly of sediment and eroded bedrock and surrounded by a rim of highly resistant sandstone. Here the Mekong River is joined by the Songkhram and Mun Rivers on the right bank and the Nam Ca Dinh, Se Bang Fai, and Se Bang Hiang Rivers on the left bank.

The Mekong River flows through a broad valley to the east of the Khorat Plateau and enters the Tonle Sap Basin just north of Pakse. The Tonle Sap Basin is a large alluvial plain surrounded by hills. At the southern end of the basin, the mainstream breaks up into a complex network of channels that branch off and reconnect. The western and central parts of the Tonle Sap Basin make up the Great Lake.

Located in the Cambodian floodplains, the Tonle Sap Lake or Great Lake is the largest freshwater body in Southeast Asia.

This hydrological cycle supports the lake’s rich biodiversity, including fish, wildlife and plants on which many local communities rely for their livelihoods. For example, in Cambodia, 40% of the population depends on the Great Lake and its floodplains for both income and food supply.

Near the Cambodian capital Phnom Penh, the Bassac River, the largest distributary river channel, splits from the mainstream, marking the beginning of the Mekong Delta. Along their course, the Mekong and Bassac Rivers branch off into numerous smaller watercourses, and the delta expands to form a wedge-shaped plain that covers an area of 62,520 km2.