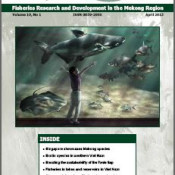 This edition looks at sustaining Tonle Sap fisheries, a new park in Singapore that showcases Mekong fish species and Lao fishway development. From Viet Nam, we report on fisheries in lakes and reservoirs, exotic species in the south of the country and the recent development of sturgeon farming. 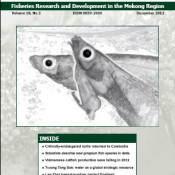 In this issue, Catch and Culture looks at a new fish species discovered in the Mekong Delta and transboundary fisheries cooperation between Lao PDR and Thailand as well as Cambodia and Viet Nam. We also report on Cambodia-Lao efforts to conserve Mekong dolphins and the return of a highly-endangered turtle from Viet Nam to Cambodia. 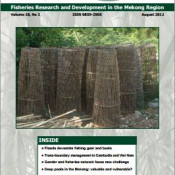 This edition looks at trans-boundary fisheries cooperation between Cambodia and Viet Nam and recent efforts to strengthen Mekong cooperation involving Japan, South Korea and the United States. It also examines the challenges to both community fisheries and the world's longest-running gender and fisheries network. Other articles cover the value and vulnerability of the Mekong's deep pool habitats and the damage to household assets following devastating floods in Cambodia. 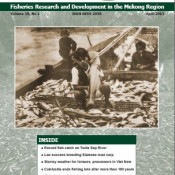 This edition looks at the record fish catch from the Tonle Sap River in the latest season, Lao efforts to breed mud carp and difficulties faced by the catfish industry in the Mekong Delta in Viet Nam. It also features a speech by Prime Minister Hun Sen on the history of Cambodian fishing lots, which are being abolished after more than 100 years. Other articles deal with feed for snakeheads, Lao fishway development, a second interview on the potential for reservoir fisheries in Cambodia and a new international fish price index. 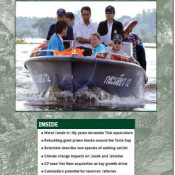 This edition looks at the damage to Thai aquaculture industry caused by Thailand's worst floods in half a century, efforts to rebuild stocks of the once-abundant giant freshwater prawn in the Tonle Sap and the discovery of a new species of walking catfish in Viet Nam. In addition, it examines the impacts of climate change on floods and fisheries, the expanding business of a Thai food conglomerate in Viet Nam and the potential for aquaculture in Cambodia. The latest edition also covers recent management changes at the Thai Department of Fisheries and regional efforts to train gender trainers. 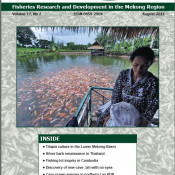 This edition features tilapia and silver barb farming, especially in Thailand, a new Cambodian crackdown on illegal structures around the Tonle Sap Lake and the discovery of a species of fish with no eyes in central Lao PDR. It also looks at the ecological characteristics of a fluvial prawn found in mountain basins of southern China and northern Lao PDR, Thailand and Vietnam. The latest edition also contains the second part of a two-part series on fisheries research in the Central Highlands of Viet Nam. 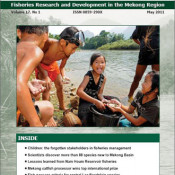 This edition features newly discovered fishes from Cambodia, Lao PDR and Viet Nam. A total of 88 species discovered are new to the basin, of which 21 species are new to science. It also features a story of the Mekong catfish processor that won top prize for the best retail product at European expo. 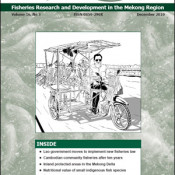 This edition summarises the new fisheries law in Lao PDR and ten years of community fisheries development in Cambodia, covering the role of legal frameworks in the management and protection of aquatic resources, as well as recent emphasis on community management. 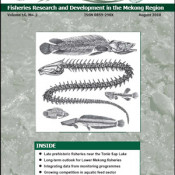 Many dams and irrigation schemes are planned on the Mekong and its tributaries, which will have major consequences for the environment and fisheries and the millions of people who depend upon them; this issue summarises how development scenarios assessed under the Basin Development Plan could affect the yield of fisheries from the lower Mekong Basin. 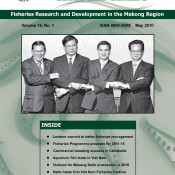 In this edition of Catch and Culture, our first for 2010, we highlight fisheries issues raised at the Mekong River Commission Summit in April, the first since the MRC was set up in 1995.