Catch and Culture - Environment Vol 23, No 1

In this issue, we examine the growing appetite for giant endangered fish species and recent developments in aquaculture in the Mekong Delta, including Viet Nam's ambitious plans for the shrimp farming sector. We also look at the five fish species identified in a joint Cambodia-Lao management plan. Other topics include a Dutch study that finds 'no safety concern' with Mekong catfish and a feature article on how ecosystem services of wetlands are valued. Catch and Culture - Environment Vol 22, No 3

This issue is largely devoted to the fisheries legacy of Thailand's late King Bhumibol, who died in October. We also look at recent developments in water diplomacy and a Lower Mekong Fish Passage conference as well as the new Environmental Management Division taking shape at the Mekong River Commission. 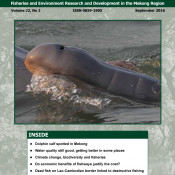 Catch and Culture - Environment Vol 22, No 2

In this issue, we look at the Irrawaddy dolphin, water quality in the Mekong and possible impacts of climate change. New MRC publications featured are a fish photo book, a monitoring manual and a code for the transboundary movement of live aquatic organisms in the Lower Mekong Basin. 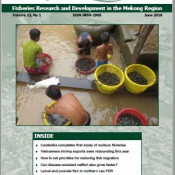 In this issue, we look at findings from Cambodia's first-ever study of mollusc fisheries in the Tonle Sap Lake, Vietnamese research into whether catfish resistant to bacteria can also grow faster and how Australian work is helping to set priorities for restoring fish migration in Lao tributaries of the Mekong. We also examine efforts to address fisheries concerns towards the first mainstream hydropower project in the Lower Mekong Basin and how fishermen helped scientists unravel the mystery of the El Niño weather phenomenon. In this issue, we examine the economic value of Lower Mekong fisheries, the growing importance of aquaculture in world fisheries production and Southeast Asia's largest ornamental fish market. We also look at a recent catfish deal between Viet Nam and the US, a slowdown in the decline of the Mekong's dolphin population and genetic considerations in culture-based fisheries. 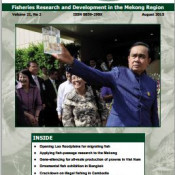 In this edition of Catch and Culture, we look at the ornamental fish market in Thailand, research into fish passes in Lao PDR, recent developments in aquaculture in Viet Nam and rising fish prices in Cambodia. The August issue also features articles on conservation, child labour in fisheries, food security, international fish trade and alternative feed for snakeheads as well as summaries of recent publications in the MRC Technical Paper series. This edition of Catch and Culture looks at Cham Muslim fishing communities on the Bassac River, declines in catches of some large and medium-sized species in the Tonle Sap River and the the last temporary breeding station for an endangered carp on the mainstream of the Mekong in northeast Thailand. It also examines recent developments with aquaculture in the Mekong Delta in Viet Nam, illegal brush-park fisheries in Cambodia and how gender training has transformed lives in a Lao fishing village. 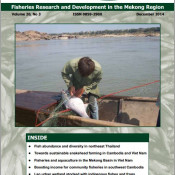 In this issue, Catch and Culture looks at fish abundance and diversity in northeast Thailand, efforts to achieve sustainable snakehead farming in Cambodia and Viet Nam as well as the development of culture-based fisheries in Cambodian and Lao villages. In addition, we look back on the past 15 years of fisheries cooperation in the Lower Mekong Basin and a recent initiative to set up an Eminent and Expert Persons Group to find concrete ways to promote a sustainable future for the Mekong region. This issue also contains a policy brief on fisheries management cooperation in East Asia including recommendations by a study group on food security which reported to regional leaders in November. The latest issue of Catch and Culture looks at impacts of climate change on water, energy and food security, the theme of the MRC Summit and international conference in Ho Chi Minh City in March. We also examine the Vietnamese launch of commercial production of a native species, known as 'Mekong salmon', the discovery of a new species of river loach in Thailand and the monitoring of fish abundance and diversity around the Tonle Sap Lake. Other articles cover fish pass opportunities for a new dam on the Sesan River and a World Bank assessment of the prospects for global fish supply and demand in 2030. 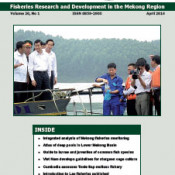 This issue showcases recent work by the MRC Fisheries Programme including an atlas of deep pools, a guide for larvae and juveniles of common fish species and separate analyses of fisheries monitoring programmes and the Mekong's largest industrial-scale fishery. It also looks at freshwater molluscs in Cambodia, guidelines for sturgeon culture in Viet Nam, fish diversity in the Upper Mekong Basin in China and the latest publication in the Mekong Development Series, An Introduction to the Fisheries of Lao PDR.