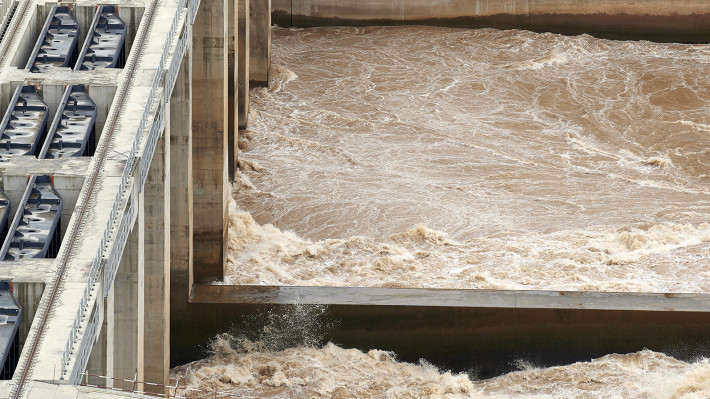 Vientiane, Lao PDR, 6 August 2019 –– The outflow of water from the Jinghong hydropower station in China’s Yunnan province will decrease by about 25-45 percent over five days, according to an official notification from China’s Ministry of Water Resources being copied to the Mekong River Commission Secretariat on Monday.

In the notification, the Ministry said the amount of water from the Jinghong dam will start decreasing from 1,100 cubic meters per second (m3/s) to about 600-800m3/s from August 11 – 15 before it will be gradually returned to the original level.

The decrease is made for the “maintenance for the transmission lines of the power grid,” the notification said. The Jinghong dam lies on the upper part of the Mekong River, where it is known as the Lancang in China.

Based on the MRC’s monitoring, water levels along the Mekong River have slowly risen, thanks to the increase of rainfall​ starting from the last week of July.

The overall water level uptick has centered around most sections in the main channel of the lower Mekong basin, with an average increase of about 1.50 meters since the beginning of August. But none of them has reached its historical long-term average (1980-2018) yet, except the sections at Lao PDR’s Luang Prabang and Thailand’s Chiang Khan, where the water is now close to their average levels.

With the water flow reduction from the Jinghong dam, some of the stations in the lower basin are expected to have some impact. For example, Chiang Saen – located approximately 300km away from Jinghong – would see its water level decrease by about 0.30m on August 13.  From Luang Prabang to Pakse of Lao PDR, a decrease of about 0.10 – 0.20m would be expected.

But above-normal rainfall is also forecast during August 14 – 20. The rain is expected in the middle part of the lower Mekong basin from Luang Prabang to Pakse down to the floodplain area of the Mekong delta in Cambodia and Viet Nam, according to satellite rainfall forecast of the National Oceanic and Atmospheric Administration’s Global Flood Alert System of the United States of America.

“We expect more rainfall with an approximate amount of 150-200 mm over the basin in the period of August to September, which would help lessen the situation and in turn contribute to the rise of the Mekong water and wetter soil moisture,” said Dr. Sothea Khem, River Forecasting Specialist of the MRC Secretariat.

The June-July’s relatively rapid and sustained decrease in water flow made the Mekong river experience one of the lowest water levels ever recorded, with drought being reported in the basin.

But the drought situation this year is considered not as bad as that in 2015-2016.

In the 2015-2016 drought, for example, about 2.5 million people in Cambodia were lack of water, and about 18 out of 25 provinces in the country were experiencing water shortage.

In May 2016, the Government of Thailand declared that 35 provinces were under serious water shortage. Salinity intrusion in Viet Nam reached 90km, affecting 70% of agricultural land in the South.