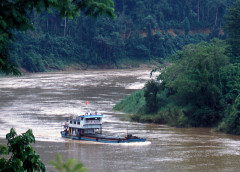 The Mekong River Commission (MRC) today released the draft final report of the Strategic Environmental Assessment (SEA) for hydropower development projects proposed on the mainstream Mekong River. In response to a high level of interest to construct up to twelve mainstream hydropower projects in Cambodia, Lao PDR and on the Lao-Thai border, the SEA weighs the proposed projects' opportunities against the risks.

"Twelve proposals for mainstream hydropower involving private sector developers prompted the MRC to commission an integrated assessment of the benefits, costs and impacts including the influence of projects constructed or under implementation on the river upstream in China. This SEA is one of the most complex attempted in an international river basin and already demonstrates the value of cooperation amongst MRC member countries on what are highly sensitive issues," said Jeremy Bird, CEO of the Mekong River Commission Secretariat.

The 14-month study critically assesses the impact mainstream hydropower projects would have on the river's entire environment and provides recommendations on how Member Countries could proceed, if they decide to pursue the proposed development. The SEA draws on the views of a range of stakeholders who often hold diverse views on how the basin's resources should be developed and protected for the benefit of its people. The SEA raises awareness of critical issues, and provides recommendations and options for Member Countries to discuss when considering economic benefits and socio-environmental implications.

"The SEA results will support the consultation process for individual mainstream hydropower projects that is required under the 1995 Mekong Agreement before a decision is made whether or not to go ahead and, if so, under what circumstances. This process is just starting for Xayaburi in northern Lao PDR, the first of the proposed dams," Mr. Bird, continued.

The SEA was undertaken as a collaborative process by a commissioned team of consultants and involved the MRC Secretariat, government agencies from the four Member Countries, as well as representatives of civil society, the private sector, a research team from China and other stakeholders. The SEA was coordinated by the Initiative on Sustainable Hydropower, a cross-cutting MRC initiative that works together with other MRC programmes.

The SEA outlines the extent to which natural processes, fisheries, aquatic and terrestrial biodiversity, and livelihoods may be irreversibly impacted by hydropower development and offers an indication to the extent that these can be avoided, mitigated or minimised by adequate planning. Balancing the equation, the report describes the potential benefits associated with about 13,500 MW of renewable hydropower development that would contribute to national economic growth, finance socio-economic and poverty reduction programmes and offset carbon emissions from alternative fossil fuel projects.

Impacts depend upon the number and configuration of projects that might proceed, but the numbers of people affected relate more to the potential for such projects to disrupt migratory fisheries on which many of the region's poor depend for their livelihood and nutrition rather than on resettlement of communities. Over one million people would be either directly or indirectly affected by the proposed hydropower development, if plans proceed.

One central risk mentioned in the SEA Final Report focuses on distribution costs and benefits between MRC Member Countries and local communities. The SEA expresses concern that national benefits would need to be used to fully address impacts on affected and vulnerable riverine communities. The SEA also places the proposed Lower Mekong Basin mainstream schemes in the context of the cumulative and trans-boundary impacts of the growing number of tributary dams in the Lower Mekong Basin, as well as the storage dams on the Lancang River in China.

The SEA presents four strategic options for mainstream hydropower development. These options range from "cease all dam development" to a "market driven development" approach for proposed mainstream projects. Within this wide spectrum, one of the key recommendations of the SEA consulting team suggests that the Member Countries should consider Strategic Option 2, "Deferred decision on all mainstream dams for a set period." The consultants advise that due to the uncertainties regarding scale and irreversibility of risks in such a complex river system, that decisions on mainstream dams should be deferred for ten years, with reviews made every three years to ensure that the necessary conditions to strengthen understanding of the natural systems as well as management and regulatory processes are conducted effectively.

The SEA has highlighted issues related to the development of a proposed set of 12 projects for the Lower Mekong Basin. It provides the basis for discussion within the MRC on what level of benefits can be considered sustainable and what thresholds of impact could be considered provided viable mitigation mechanisms exist. In-depth discussion will now be held by MRC and Member Countries with the SEA providing an important background analysis for the discussion of individual projects such as Xayaburi under the MRC's formal procedures for prior consultation.

The growing interest in mainstream Mekong development follows the completion of three hydropower projects in China, which will result in increased dry season flows downstream thereby raising the potential for mainstream hydropower development in the Lower Mekong Basin (LMB) as well as the increased emphasis globally on reducing carbon emissions from electricity generation. Many of the projects have been identified for over 15 years but it is the more recent interest among private sector developers that has led to the current plans being developed to a more advanced stage of feasibility study.