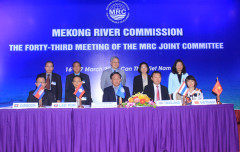 Can Tho, Viet Nam, 17 March 2016 – The ongoing organisational reform of the Mekong River Commission (MRC) has further moved forwards as the MRC’s higher body has decided immediate steps to implement the reform agenda during its bi-annual meeting in Can Tho, Viet Nam.

The two-day meeting was held for the Joint Committee (JC), which comprises senior officials of the four Member Countries – Cambodia, Lao PDR, Thailand and Viet Nam – to discuss the management, organisational and cooperation matters as well as policy and strategy issues. The JC is charged with implementing decisions and policies made by the MRC Council, the organisation’s highest decision-making body.

The meeting discussed in greater details the staff composition and recruitment plan for the new structure for the MRC Secretariat, following the Council’s approval of the new structure at the 22nd Council Meeting earlier this year. The JC members endorsed in principle on the staffing plan to have a 64 full-time, fixed-term workforce to carry out the core river functions work at the Secretariat for the new Strategic Plan 2016-2020, the recruitment of which will take off after this meeting in three steps.

The meeting also discussed the study of having one office location for the MRC Secretariat as the organisation is moving towards a leaner structure, taking into account different factors such as operational costs, effectiveness and efficiency of work in core functions to support the sustainable development of the Lower Mekong River Basin.

The JC members discussed deliberately a number of other key issues, including the progress of improving the Technical Guideline for the Implementation of the Procedures for Water Quality and Master Plan for Regional Waterborne Transport in the Lower Mekong Basin, and concluded today.

During the two-day meeting, the JC members learned about China’s action to release emergency water to the Mekong River from Yunnan’s Jinghong Reservoir to help ease the drought situation of the downstream countries.

According to an official letter from China dated on 15 March 2016, China began on the same day releasing 2,000 m3/s of water from the dam. The release will continue until 10 April 2016.

China’s move came right in time when some parts of the countries of the Lower Mekong Basin are experiencing one of the worst drought conditions on record. The JC members and Secretariat expressed their warm welcome to the gesture of goodwill and cooperation from China.

“The MRC really appreciates such goodwill of the Government of the People’s Republic of China to release more water to Mekong River from Jinghong hydropower station. It would ease drought and help irrigation in some parts of the region,” said Pham Tuan Phan, CEO of the MRC Secretariat at the meeting.

China has been a Dialogue Partner of the MRC since 1996. The MRC and China have cooperated in several areas including navigation, water resources, and hydropower development, through activities such as knowledge sharing and technical data exchange.

As a Dialogue Partner of the MRC, China participates in the MRC’s International Conferences, the four-yearly Summits and the annual Dialogue Meetings. It has also joined the Junior Riparian Professionals (JRP) Programme, the MRC’s on-the-job training for young professionals from the four Member Countries, China and Myanmar.

The MRC is the intergovernmental body responsible for cooperation on the sustainable management of the Mekong Basin whose members include Cambodia, Lao PDR, Thailand and Viet Nam. It is established to promote cooperation among the Member Countries and thus it is not a supra-national or regulatory body. The commission looks across all sectors including sustaining fisheries, identifying opportunities for agriculture, maintaining the freedom of navigation, flood management and preserving important ecosystems. Superimposed on these are the future effects of more extreme floods, prolonged drought and sea level rise associated with climate change.

In 1996 the MRC held its first Dialogue Meeting with its Dialogue Partners – China and Myanmar.

On 1 April 2002, the People's Republic of China signed an agreement on the provision of hydrological information on the Mekong-Lancang River. Under this agreement China now provides water-level data in the flood season from two stations located on the Lancang River in China. This information is fed into the MRC's flood forecasting system. China contributes 13.5 per cent of the flow of the Mekong River.