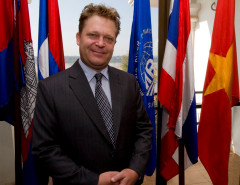 Guttman, who has proven managerial skills coordinating 50 development agencies in five different Mekong countries while with the Wetlands Alliance, will assume his three-year tenure at the MRCS on November 14, 2011, where he will lead a 150-strong team and oversee the two secretariat offices in Phnom Penh and Vientiane.

His extensive technical expertise and inside knowledge gained from living in the region for almost two decades will enable him to lead the MRC during a period of change and growth within the Mekong River Commission (MRC).

The Swedish national is no stranger to the Mekong River Commission or its vision, having served as the head of the Environment Programme for six years from 2001-2007.

His previous tenure at the MRC ensures a sound knowledge of the critical issues facing the organization and will allow him to effectively guide it during a critical juncture in this rapidly changing area.

“I see the position of CEO as an opportunity to contribute to the success of the MRC cooperation and have a personal stake in making a difference in the globally important aim to improve development and management of our precious water resources,” said Guttman.

With over a dozen scholarly publications to his credit, he is well-known throughout the region as a leading expert on aquatic resources management in the Mekong Basin.

The 46-year old native of Göteberg, Sweden has one son and likes to fish in his spare time.

The Mekong River Commission (MRC) is the only inter-governmental agency that works directly with the governments of Cambodia, Lao PDR, Thailand and Viet Nam on their common specific interests—joint management of shared water resources and sustainable development of the Mekong River.

As a regional facilitating and advisory body governed by water and environment ministers of the four countries, the MRC aims to ensure that the Mekong water is developed in the most efficient manner that mutually benefits all Member Countries and minimises harmful effects on people and the environment in the Lower Mekong Basin.

Serving its member states with technical know-how and basin-wide perspectives, the MRC plays a key role in regional decision-making and the execution of policies in a way that promotes sustainable development and poverty alleviation.

Since its establishment in 1995 by the Mekong Agreement, the MRC has adopted a number of rules and procedures, such as the Procedures for Water Quality, to provide a systematic and uniform process for the implementation of this accord. It also acts as a regional knowledge hub on several key issues such as fisheries, navigation, flood and drought management, environment monitoring and hydropower development.

The MRC Secretariat is an operational arm comprising about 150 staff members based in two Secretariat offices in Phnom Penh, Cambodia and Vientiane, Lao PDR. Its focal points in the four countries, the National Mekong Committee, coordinate work at the national level.

The agency engages a wide range of stakeholders into its programme work and strategic planning. The two upper states of the Mekong River Basin, the People's Republic of China and the Union of Myanmar, are dialogue partners with the MRC.

The MRC is funded by contributions from the four Member Countries and development partners—country governments, development banks and international organisations.