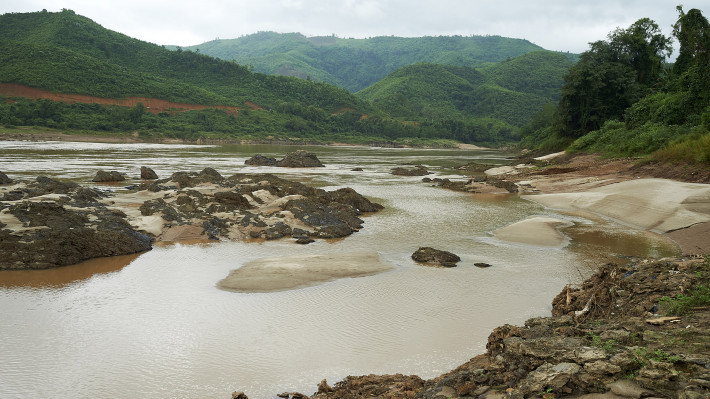 Vientiane, Lao PDR, 18 July 2019 – The Mekong water levels during this early flood season from June to July are among the lowest on record, falling below their historical long-term minimum levels. But the situation is expected to get better at the end of July.

From the upper reaches of the lower Mekong basin in Thailand’s Chiang Saen to Lao PDR’s Luang Prabang and Vientiane and further down to Thailand’s Nong Khai and Cambodia’s Neak Luong, the water levels are all below those that occurred in 1992, which was by far the year with the lowest flow on record. 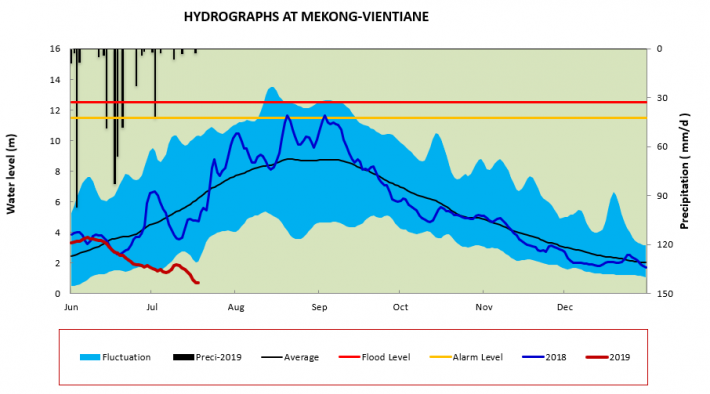 Water level hydrograph in Vientiane of Lao PDR on 18 July.

Although the relatively rapid and sustained decrease in water levels and discharge from June to July 2019 has been unprecedented, it does not reflect the natural recession of the seasonal flows when during this period the water should be slowly increasing.

According to the Mekong River Commission’s (MRC) analysis and available information, some key factors have contributed to the current state of what is described as the “regional low flow” of the Mekong river basin.

There has been very deficient rainfall over the Mekong basin since the beginning of this year. In the upper reaches of the lower Mekong basin, Chiang Sean had the lowest rainfall this June compared to the other areas downstream. Its June’s average rainfall was only about 67% of the total amount of monthly rainfall in June 2006-2018.

The amount of water flowing from the upper part of the basin, where the Mekong is known as Lancang, could also be a potential contribution of the low flow. According to the notification from China, starting from 5 to 19 July the amount of water flowing out from the Jinghong dam in Yunnan province would be fluctuating from 1,050 – 1,250 cubic meters per second (m3/s) to 504 – 600 m3/s due to “grid maintenance”.

Besides, the drier-than-average conditions are expected in July over parts of the southern ASEAN region. Thailand, Lao PDR and Myanmar are some of the countries that would be hit, according to the Asian Specialized Meteorological Center (ASMC).

But the current state of the lower water in the basin is anticipated to improve at the end of this month, with rain in the forecast.

According to the ASMC, wetter-than-average conditions may develop over parts of the region between the Indian and Pacific Oceans and eastern Mekong sub-region, including the four lower Mekong countries plus Myanmar.