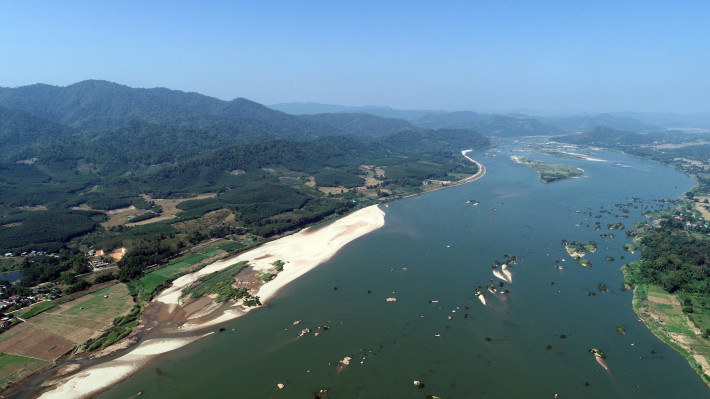 Vientiane, Lao PDR, 9 December 2019 – The extremely low flow, slow drop in the river sediments, and presence of algae on the sand and bedrock river bottom are some of the possible causes why the Mekong River has recently acquired an aquamarine color, says the Mekong River Commission. This phenomenon may spread to other parts of the River where low flows occur.

The Mekong River at Thailand’s Nakhon Phanom and Lao PDR’s Thakhek has lately taken on a blue-green hue. According to the MRC’s preliminary analysis that looked at the causes and potential impacts of the phenomenon, many factors have contributed to the occurrence whose consequences could be problematic.

The analysis has indicated that the extremely low flows now being experienced in the Mekong, during one of the worst droughts ever experienced in the region, have changed the water color. The fine sediments normally found in the fast flowing water and deeper water levels that give the water the brownish color have dropped out, creating clearer water conditions.

This means that, added the analysis, when the sunlight hits the river, the water strongly absorbs what is known as the “long-wavelength colors” at the red end of the light spectrum and makes the river look blue. This occurs in just a few meters of water. 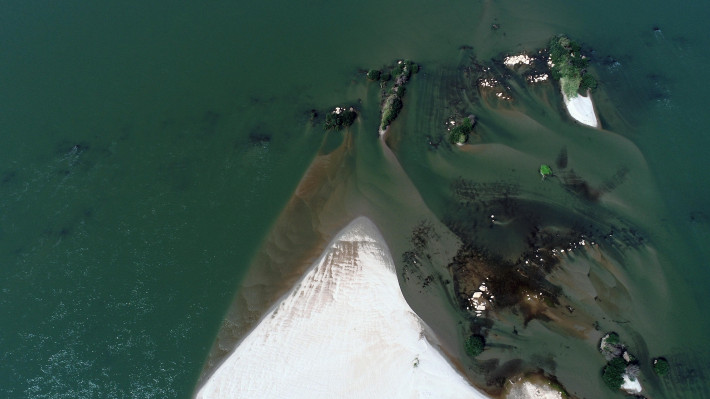 The Mekong River at Sangthong district of Lao capital city Vientiane is seen from the sky, indicating the area’s low water level and the algae that are building up at the very shallow part of the river.

The clearer water allows microscopic plants or algae to grow on the sand and bedrock river bottom causing the margins of the river to turn green, noted the analysis. These algae are normally flushed away by the river current. But due to the exceptionally low river level, this is not happening at Nakhon Phanom and perhaps elsewhere. Instead, the algae are building up.

The analysis warned that the conditions could probably be made worse if fertilizers used in agriculture enters the river feeding the growth of algae.

“The blue-green water phenomenon is likely to spread to other stretches of the Mekong River where low flows are encountered,” said the MRC Secretariat’s Chief Environment Management Officer Dr. So Nam, who led the analysis. “The issues of low flows and sedimentation could possibly lead to adverse impacts that have been well-quantified in the MRC Council Study.”

According to the analysis, some of the potential impacts include change in productivity of the river with less foods available for insects and small fishes, and reduced productivity of aquatic biodiversity, including fish due to high water clarity. This will in turn affect the fish catches and the livelihoods of local communities.

High water clarity also leads to significant algal growth or algal bloom. During the day, this leads to high dissolved oxygen levels, but to very low dissolved oxygen at night. This can affect lives of different fish, according to the analysis.

The analysis also added that if water clarity remains high, the algal bloom can cause thick green mats that will rot and smell badly. It warned that if the conditions get worse, the algae can change from green species (Chlorophyceae) to blue green species (Cyanophyceae), producing toxic substances that can harm animals.

But Mr. Nam said that “it is unlikely such conditions will occur in the main river, and be restricted to backwaters.” However, he warned that “people should be careful watering their animals if the water is very green”.

Based on the analysis, the present conditions of blue-green appearance in the Mekong may persist until flows in the river increase at the onset of the next flood season, which usually begins in late May. The conditions may also recuperate, added the analysis, if large volumes of water are released from the storage reservoirs in the Upper Mekong (Lancang) dams and tributary dams to mobilize sediments and give the Mekong its typically brown color.

The MRC’s flow monitoring shows that dry season flows have increased during the past few years due to water release from reservoirs in order to produce electricity.

Read the news in Khmer or Vietnamese.