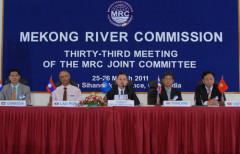 Due to unforeseen changes, members of the Joint Committee (JC) of the Mekong River Commission (MRC) have rescheduled the date of the JC Special Session on the prior consultation process for the proposed Xayaburi project. Please note that the date has changed from 21 April 2011 to Tuesday, 19 April 2011. The meeting’s venue has not changed and will be held at the Office of the MRC Secretariat in Vientiane. A media statement on the Special Session’s conclusions will be issued on the same date, following the end of the meeting.

March 25, 2011, Preah Sihanouk Province, CAMBODIA—As the deadline for reaching a decision comes closer, four Lower Mekong Basin Countries have agreed to convene a special session on the prior consultation process for the proposed Xayaburi mainstream hydropower development project, before determining how they should proceed with the proposal.

The countries, Cambodia, Lao PDR, Thailand and Viet Nam, reached this decision at the 33rd Mekong River Commission (MRC) Joint Committee (JC) Meeting in Preah Sihanouk Province which ends tomorrow. They agreed that they would join with the intent to seek a conclusion at the newly-scheduled meeting on 21 April 2011.

The Xayaburi project, proposed by the Government of Lao PDR, falls under the MRC’s Procedures for Notification, Prior Consultation and Agreement (PNPCA) process, which require that the four countries come together with the aim of reaching a conclusion on the proposal within six months of its submission. The deadline for the end of this formal process is 22 April 2011.

The Xayaburi project, designed to generate power for consumption in Thailand and Lao PDR, is tabled for consideration, among other management, organisational and procedures-related matters, at this internal meeting. The JC Members, comprising one senior official from each of the four countries, agree to hold a special Joint Committee meeting in Vientiane, Lao PDR to come to a conclusion on the project.

Since the notification of what would be the first dam project on the mainstream of the Lower Mekong River, the countries have conducted national consultations with related stakeholders including potentially affected communities, to gauge their views and perspectives on the project. The MRC Secretariat also commissioned a team of experts in several sectors including fisheries, sediment and dam safety design to review documents including the Environmental Impact Assessment submitted by the Government of the Lao PDR to other MRC countries.

The JC Members also agreed to disclose to the public the MRC technical review which has been used by the four countries as part of their consideration of the project.

The report was presented at the meeting today but the Member Countries have not provided their official comments on it yet. Lao PDR, as the notifying country, commented that the report is a valuable contribution to the process of considering the Xayaburi project as well as other similar development initiatives but will provide its detailed comments at a later time.

The 1995 MRC Mekong Agreement established the Procedures for Notification, Prior Consultation and Agreement (PNPCA), which states that Member Countries must notify the MRC’s Joint Committee in the event they wish to engage in any major infrastructure developments (such as hydropower schemes) on the mainstream Mekong or tributaries, particularly as those developments may have significant trans-boundary impacts on people or the environment downstream.

The PNPCA process itself is the formal mechanism in place to enable one or more Member Countries to submit an individual project for regional consideration. In the case of the Xayaburi dam project, the Government of Lao PDR submitted the proposal to the MRC, which began the prior consultation process.

The prior consultation process is one of a number of protocols in the 1995 Mekong Agreement to promote cooperation in sustainable management of the basin's water resources and avoid regional disputes developing.

The Xayaburi dam is located approximately 150 km downstream of Luang Prabang in northern Lao PDR. The dam has an installed capacity of 1,260 megawatts with a dam 810 m long and 32 m high and has a reservoir area of 49 km2 and live storage of 1,300 cubic metres. The primary objective of the Xayaburi dam project is to generate foreign exchange earnings for financing socio-economic development in Lao PDR. The developer is Ch. Karnchang Public Co. Ltd. of Thailand who negotiated a tariff agreement with EGAT in July 2010.

The MRC Secretariat acts as a facilitating body for the prior consultation process. It is the intergovernmental advisory body responsible for cooperation on the sustainable management of the Mekong Basin whose members include Cambodia, Lao PDR, Thailand and Viet Nam. In dealing with this challenge, the commission looks across all sectors including sustaining fisheries, identifying opportunities for agriculture, maintaining the freedom of navigation, flood management and preserving important ecosystems.

The 33rd Joint Committee Meeting, held during 24 – 26 March 2011, is the MRC’s scheduled bi-annual event ogranised for regular discussion on management, organisational, policy and procedures-related matters. The Xayaburi project is tabled as one of a wide range of agenda items at this meeting.

Cambodia, Thailand and Viet Nam have recently consulted national stakeholders on the proposed Pak Lay hydropower project during the six-month prior consultation process for the project.