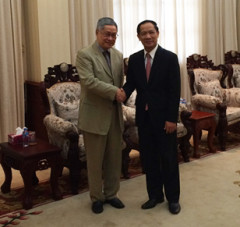 Vientiane, Lao PDR, 7 June 2016 – A Lao Minister in charge of the ASEAN matters has promised to support the Mekong River Commission’s intention to strengthen the cooperation between the two regional organisations, says the MRC Secretariat’s CEO Pham Tuan Phan.

CEO Pham yesterday met in Vientiane with H.E. Mr Alounkeo Kittikhoun, Minister to the Prime Minister’s Office and ASEAN Senior Officials Meeting (SOM) Leader of Lao PDR, in Lao PDR capacity as ASEAN Chair, to discuss and receive guidance on a renewed cooperation with the ASEAN built upon the past engagement and to explore a possibility for the MRC to further collaborate with ASEAN and seek support from partners of both organisations.

During the meeting, the Minister supported the initiative, saying that the cooperation between the two regional organisations would be crucial to the sustainable development of the Mekong countries. He further promised that he would bring forwards the efforts of the MRC Secretariat in revitalising the MRC-ASEAN Cooperation and discuss the matter with other SOM leaders at the upcoming SOM meeting scheduled for August this year, according to the CEO.

The ASEAN and MRC Secretariats signed a five-year Memorandum of Understanding on 4 April 2010 in Thailand on the development and management of the Mekong water resources as well as in addressing challenges common to the two organisations. The five-year MoU has provided a framework for collaboration to ensure better utilisation of water-related resources.

“We had candid discussions. I highly appreciate the opportunity to meet with the Minister to bring to his attention our willingness and enthusiasm, and discuss our plan to re-cooperate with the ASEAN Secretariat and to participate in relevant ASEAN meetings chaired by Lao PDR this year,” told CEO Pham. “The MRC-ASEAN Cooperation is prioritised in the Basin Development Strategy and MRC Strategic Plan. I hope we can accelerate this reengagement very soon.”

The MRC Secretariat, following this meeting, will address a letter to the ASEAN Secretary General to express the organisation’s willingness to re-engage with the ASEAN starting from the renewal of the MoU that expired early last year.