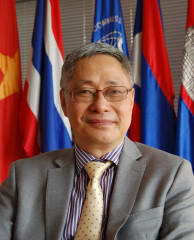 This is the first time that the MRC has appointed a CEO from one of the four Member Countries. The move coincides with the MRC’s efforts in structural reforms of decentralisation and “riparianisation” to make the organisation self-sufficient by 2030.

For the next three years, Phan will lead the MRC’s structural reforms and oversee a strong team of men and women to carry out the new five-year strategic development plan for regional cooperation and sustainable development of the Mekong River Basin.

The first riparian CEO has extensive managerial experience running offices at international organisations as well as in the private sector. Prior to this appointment, Phan worked as Chief Executive Officer for Add-on Development in Hanoi, following his tenues at the United Nations in New York as Chief of Integrated Management Information Service and at the Comprehensive Nuclear-Test-Ban Treaty Organisation in Vienna as Chief of Global Communications Infrastructure Section.

“As a Mekong citizen, it’s my great honour to be the first riparian CEO of the MRC Secretariat. I will do whatever it takes to lead and guide this organisation to effectively achieve its goals, with greater vision and a finer spirit of hope and achievement in becoming a self-financed institution in 2030,” said Phan as he assumed his office.

The 62-year old native of Hanoi holds Master’s and Doctor’s degrees in Physics and Computing from the State University in Belarus, and has completed core courses of Master of Business Administration from the Open University in the United Kingdom. He is married and has two daughters.

The Mekong River Commission (MRC) is the only inter-governmental agency that works directly with the governments of Cambodia, Lao PDR, Thailand and Viet Nam on their common specific interests—joint management of shared water resources and sustainable development of the Mekong River.

As a regional facilitating and advisory body governed by water and environment ministers of the four countries, the MRC aims to ensure that the Mekong water is developed in the most efficient manner that mutually benefits all Member Countries and minimises harmful effects on people and the environment in the Lower Mekong Basin.

Serving its member states with technical know-how and basin-wide perspectives, the MRC plays a key role in regional decision-making and the execution of policies in a way that promotes sustainable development and poverty alleviation.

Since its establishment in 1995 by the Mekong Agreement, the MRC has adopted a number of rules and procedures, such as the Procedures for Water Quality, to provide a systematic and uniform process for the implementation of this accord. It also acts as a regional knowledge hub on several key issues such as fisheries, navigation, flood and drought management, environment monitoring and hydropower development.

The MRC Secretariat is an operational arm, based in two Secretariat offices in Phnom Penh, Cambodia and Vientiane, Lao PDR. Its focal points in the four countries, the National Mekong Committee, coordinate work at the national level.

The agency engages a wide range of stakeholders into its programme work and strategic planning. The two upper states of the Mekong River Basin, the People's Republic of China and the Union of Myanmar, are dialogue partners with the MRC.

The MRC is funded by contributions from the four Member Countries and development partners—country governments, development banks and international organisations.