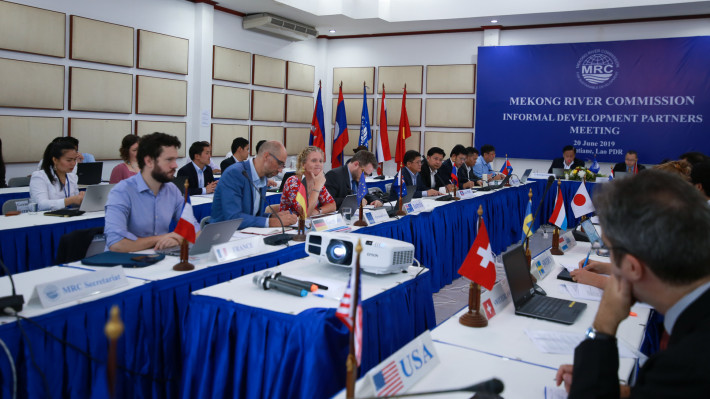 Vientiane, Lao PDR, 21 June 2019 — Development partners of the Mekong River Commission (MRC) have praised it for the good work it has done over the first half of 2019 and outlined key areas for the Commission to focus on over the next strategic cycle.

“As the Development Partners, we’re pleased to see the new achievements made by the MRC and we’d like to highly congratulate the MRC on these,” Chair of Development Partners Group Mr. Jens Lütkenherm, who is also Ambassador of Germany to Lao PDR, said at the meeting that saw some 50 people attend. 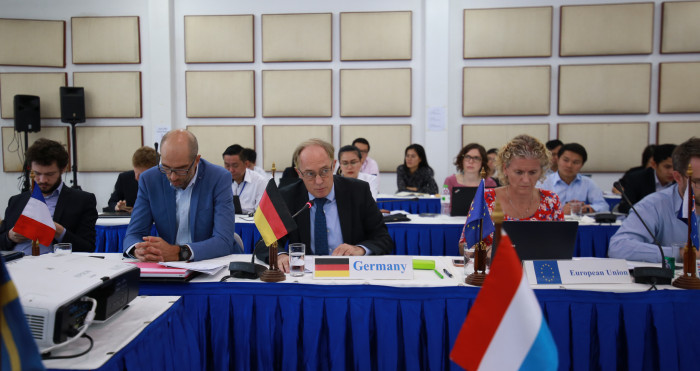 Chair of Development Partners Group Mr. Jens Lütkenherm, who is also Ambassador of Germany to Lao PDR, reads out the statement of the development partners at the meeting.

In their joint statement read by the Ambassador, the donor group applauded the “MRC Secretariat and member countries for the successful completion of the prior consultation for the Pak Lay hydropower project, through the signature of a Joint Statement”.

“We also acknowledge the dedication of the Government of Laos to the post-prior consultation process, through the approval of the Joint Action Plans for the Pak Beng and Pak Lay hydropower projects,” the statement continues.

The donors also recognized the “efforts made by MRC to facilitate the involvement of different stakeholder groups in the implementation of key MRC procedures”.

To have a much wider public participation, the group encouraged the MRC to further consolidate such partnerships and to support member countries with consultation processes at the national level and look for more room to include civil society organizations in relevant MRC’s governance and technical meetings.

While the development partners praised efforts by some of the MRC member countries in considering and implementing recommendations from the ‘Council Study’ into national policies and programs, they encouraged all the members to “translate the findings of the study into national and regional policies and action plans”. The group underscored the review of the MRC’s Sustainable Hydropower Development Strategy, whose aim is to balance national and regional trade-offs, based on science and economics, with the ultimate goal of realizing wider benefits for the people living in the Mekong river basin.

The donors also acknowledged the Secretariat’s efforts in leading the reinvigoration of the data and information systems of the MRC. But it further encouraged the MRC to expand “the improvement of data and information disclosure for more effective coordination, greater public consultation and transparency at national and regional levels”.

With the latest report from the Intergovernmental Panel on Climate Change (IPCC) confirming that the Mekong river basin is among the most vulnerable region to climate change, the donor group suggested that the MRC “prioritize adaptation measures in preparation of the next Basin Development Strategy, Strategic Plan and National Indicative Plans”.

The group also welcomed and encouraged MRC’s continued efforts on gender mainstreaming, reflecting the critical role of women to achieve the sustainable development goals. Specifically, it encouraged the MRC to “give greater emphasis on poverty reduction in the development of the new basin strategies to achieve the MRC’s vision of an economically prosperous, socially just and environmentally sound Mekong river basin”.

The MRC member countries welcomed the Donors’ statement and pledged to give their high attention and consideration on the recommendations and suggestions made. 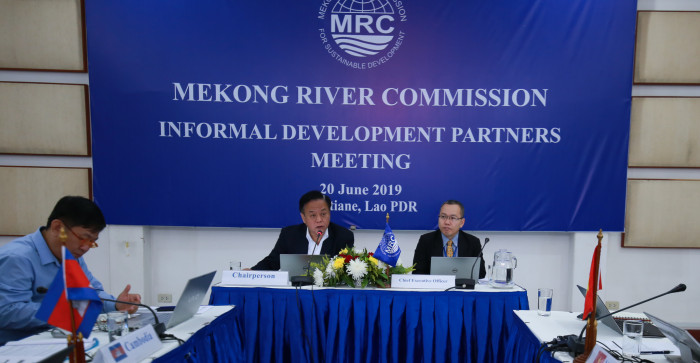 “We welcome words of encouragement and appreciate suggestions by the Development Partners who would like to see, as much as we do, the prosperity and sustainability of the Mekong river basin and our people. We will endeavor to address as much as we can the raised concerns and suggestions,” Chairperson of the MRC Joint Committee for 2019 Dr. Le Duc Trung told the meeting.

The one-day annual Informal Development Partners Meeting provided a platform for the MRC and its development partners (donor governments and organizations) to discuss the progress made over the first six months of this year, focusing on implementation of the current strategic plan 2016-2020 and preparation for the next strategic cycle.