Living on the Edge of the Rising Sea 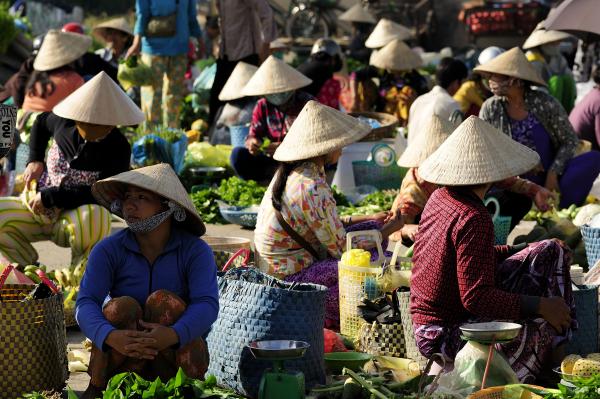 KIEN GIANG, Viet Nam—Along a muddy and windswept beach in a remote seaside village in the south-western province of the Mekong Delta, a one-lane dirt road divides the green arable land on one side and a beach-front on the other. It seems like any other road, but for villagers here, this is simply a much-needed lifeline, a buffer that prevents the rising seawater from swamping their homes.

Those who live behind the dyke, built by the Vietnamese government, have seen their rice fields and houses rescued from saltwater intrusion. Not so fortunate, are the families whose houses and lands are sandwiched between the wall and the sea.

“If the salty sea water goes into rice fields for even just one night, it would seem like you poured boiling water onto the rice crops, instantly killing them,” said Danh Huong, 75, who is among a number of people in Binh Giang village whose compounds are located outside ‘the safe zone’, and who have few options to live elsewhere.

Many years ago, they planted mangroves as natural protection against the saltwater.

“Now the sea comes closer and has claimed the mangroves first, and then the eucalyptuses. Now, they are all gone,” said Mr. Huong.

Beach-front residents here said they lost some of their farms to the accumulated 100-metre sea intrusion. Threatened by the rising tide, locals have invented home-grown strategies to cope with what they fear that the worst is yet to come.

Danh Hau, a 33-year-old shrimp farmer, who had lost half of his land and shrimp to the insatiable sea, decided to build two-tier dykes around fish and shrimp compounds located next to his one-storey house, where he lives with his wife and child. 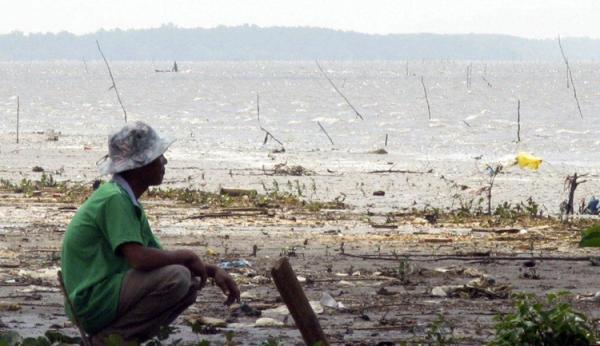 Danh Hau, a shrimp farmer, has lost half of his land and shrimp to the rising sea level in Viet Nam’s Mekong Delta

“I have to make this secondary dyke because I am afraid that the waves will come back (and break the first dyke),” he said, adding that he was not sure whether this method would work out in the long run.

Dykes and mangrove forests give shelter for now. But Mr Huong and his neighbours said they live with uncertainty, fearing that they will soon be defeated by higher tides.

“We have some solutions, but the sea now is more powerful than before,” he said. “In the past during the high-tide season the sea water was much lower. Now the sea is higher and higher.”

Home to more than 17 million people, the low-lying Mekong Delta, Viet Nam’s rice bowl, is one of the world’s most vulnerable areas to rising sea levels caused by climate change.

Kien Tran-Mai, a climate change specialist at the Mekong River Commission, points out that without effective solutions, the sea level would increase by 0.8 to one metre by 2100, in which up to 38% of the Mekong Delta could end up under water. As a result, around 30% of the population will be affected and many will be forced to migrate to other areas, he said.

“These predictions are quite conservative and moderate with a certain extent of uncertainty. Other forecasts afford much worse scenarios,” he said.

The Mekong River Commission (MRC) is currently working with international and regional experts, national and local authorities, affected communities and other partner organisations in the Lower Mekong Basin to gather lessons learnt and local wisdom—how people manage to deal with more storms, floods and higher sea levels. This will enable all parties to consider applying such practical knowledge in their towns and villages.

Ky Quang Vinh, a climate change specialist of Can Tho City’s Department of Natural Resources and Environment (DONRE) and a researcher at Can Tho University, is among academics who share insights regularly with the MRC. He points out that the region is becoming much more vulnerable than before. There are now more storms and stronger typhoons and increasing erosion on the sea side.

The area is already exposed to other threats, such as rapidly growing development and urbanisation, which will likely change river flow routines, he said.

“The majority of people in the Mekong Delta are rice farmers. If we don’t have solutions to actively catch up with the (growing) impact, productivity will be reduced and poverty increased,” said Mr. Vinh, adding that this will trigger increased migration from affected areas to cities.

Methods that local people are applying to deal with rising sea level and unusual floods are very basic, he said. People in this area, for example, lift their houses off the ground by attaching poles to the foundations.

“In the past there was fresh water flooding and this was a food resource for the people. But now there’s saltwater flooding, and with this things will become very different and very negative,” he said. 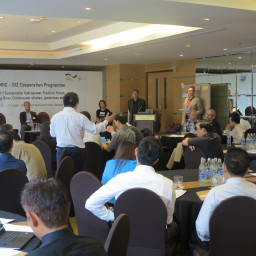