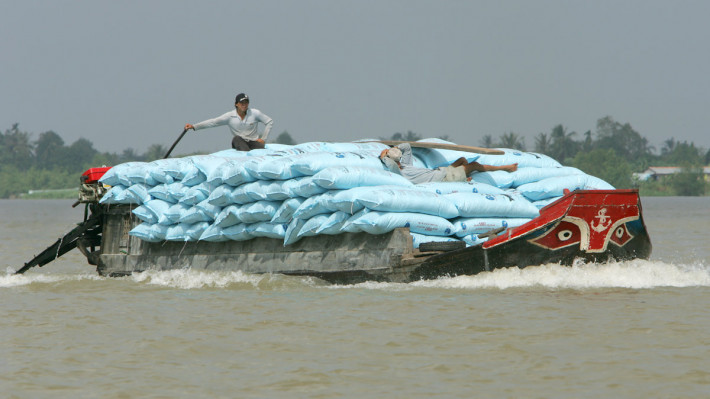 The Mekong River has always been an important conduit for the movement of people and goods within and between the basin’s countries. Trade along the river generates economic benefits; however, it also results in increased traffic that can produce negative impacts, such as pollution from ships, oil spills from shipping accidents, and safety risks for river users.

The MRC is the only organisation in the region with a clear mandate to manage development and monitor cross-border waterborne transport. Its Navigation Programme is designed to establish legal principles with respect to navigation and increase international trade opportunities for MRC Member Countries, while ensuring effective and safe river-borne transportation.

Throughout the strategic cycle 2011-2015, the Navigation Programme coordinated several detailed surveys for improving traffic on the Mekong River system, including a number of stretches along the Mekong, Tonle Sap, Vam Nao, and Bassac Rivers. The products of the surveys directly support more efficient and safer transportation on the Mekong River. The programme also developed Electronic Navigation Charts (ENCs) of the Mekong, Vam Nao, and Bassac Rivers in Viet Nam, which can be used by modern vessels with onboard computer-based navigation information systems.

The programme conducted several design studies that encompass, among other considerations, waterway channels, buoys and beacons, standard specifications for ship locks for hydropower development and modern standards for passenger jetties.

In 2009, the Navigation Programme facilitated the formulation of the Agreement on Waterway Transport between Cambodia and Viet Nam.

This navigation agreement was the first between the two countries to reduce cross-border navigation restrictions, improve efficiency and safety standards. The agreement provides rules and regulations to improve the safety of the shipping of dangerous goods, such as oil and hazardous liquid cargoes, thus making waterway trade in the region safer and more reliable.

As a result, goods transported through the Phnom Penh Autonomous Port increased 45% in 2010.

Waterway safety was a top priority for the Navigation Programme. To establish a safer, more navigable river, the programme installed operational aids to navigation, consisting of specialised buoys and beacons along hazardous stretches. Their use makes navigation possible 24 hours a day. Safety has improved significantly on the marked channels in Cambodia and Viet Nam; however, night navigation along the Mekong River between the Lao PDR and Thailand is still challenging.

A Risk Analysis and an Environmental Impact Assessment are underway to determine the risks and impacts of increased navigation and port activities on the Mekong River in Lao PDR and Thailand with respect to the storage, handling, and carriage of dangerous goods.

The rogramme implemented a Management Information System (MIS) for the Phnom Penh Autonomous Port to better facilitate vessel transportation and planning. In addition, two tidal monitoring stations have been installed at the Mekong and Bassac estuaries. The stations will notify incoming and outgoing ships of the exact water levels at river entrances. Additionally, the Programme assisted with the development of an identification system to improve vessel tracking on the river between Phnom Penh and the Cambodia-Viet Nam Border.

For detailed information on the structure and components of the Programme, review the Navigation Programme Document.

Browse updates from the Navigation Programme.

The key development partners for this programme were the Australian and Belgian Development Cooperations, and the Association of Southeast Asian Nations (ASEAN). The total budget for the programme from 2006-2010 was US$19.6 million, of which over a third was provided by Belgium.