The Initiative for Sustainable Hydropower (ISH) was established with the aim of seeking to embed sustainable hydropower considerations into the regulatory frameworks and planning systems of member countries and into project level planning, design, implementation and operational activities. The ISH 2011-2015 Strategy emphasised this requirement as well as the need to understand the scale and distribution of risks associated with hydropower development on the main stream and on tributaries and also sought the exploration and documentation of possible avoidance, mitigation and benefit and risk sharing options. Besides the Preliminary Design Guidance for Mainstream Dams (PDG) introduced in 2009, necessary frameworks must be in place to provide assurance that risks can be effectively minimised. The ISH sought to enhance these Guidelines and to provide more effective and detailed documentation of the options and methods that may be used to cover the mitigation of hydropower risks in the Mekong based on the latest research and practice from around the world and the region and to expand the applicability of these Guidelines to the tributary developments. During 2016-2018 the work continued with funding from the MRC Basket.

Key Findings of the study:

The study developed a generic practical process for risk and impact mitigation to support Member Countries in their assessment and implementation of mitigation options. The idea is that mitigation is considered not only at the planning, feasibility and design stages of the projects, but also that the effectiveness of mitigation options is monitored and adaptations are made over the project lifecycle. Measures proposed in the study must cover all aspects of the process. The mitigation guidelines will be based on good industry practice and latest research and technical knowhow.

The MRC Hydropower Mitigation Guidelines (2018) provide a clear process and detailed technical guidance to address a range of known risks and impacts in all phases of the Project Development lifecycle:

A schematic structure of the guidelines is given below: 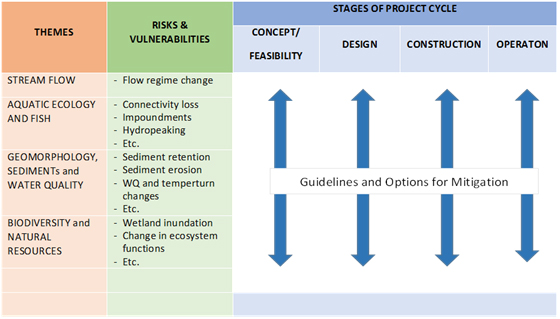 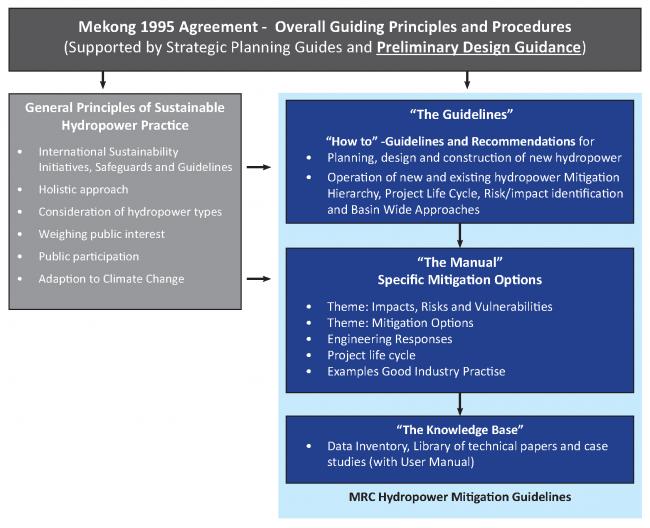